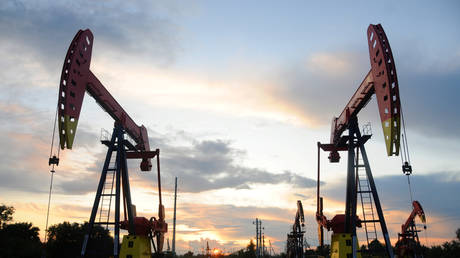 The oil inventory glut that amassed during the Covid-19 pandemic is almost gone, Bloomberg reported citing industry data. The tightening could further prop up crude prices, according to expert projections.

The International Energy Agency (IEA) said that barely a fifth of the surplus that flooded into the storage tanks of developed economies when oil demand crashed last year remained as of February. Oil inventories stood just 57 million barrels above their 2015-2019 average, down from a peak of 249 million in July, the IEA estimates.

“Commercial oil inventories across the OECD [Organisation for Economic Co-operation and Development] are already back down to their five-year average,” Ed Morse, head of commodities research at Citigroup, told the media. “What’s left of the surplus is almost entirely concentrated in China, which has been building a permanent petroleum reserve.”

Total stockpiles of crude and products subsided in late February to 1.28 billion barrels – a level last seen before the pandemic – and continue to hover there, according to the US’ Energy Information Administration. Last week, US East Coast stockpiles plunged to their lowest level in at least 30 years.

“We’re starting to see refinery runs pick up in the US, which will be good for potential crude stock draws,” said Mercedes McKay, a senior analyst at consultants FGE.

The oil surplus that gathered on the world’s seas, where ships were turned into makeshift floating depots when onshore facilities grew scarce last year, is also diminishing. The volumes have plunged, tumbling by about 27% in the past two weeks to 50.7 million barrels – the lowest in a year, according to IHS Markit.

The Organization of Petroleum Exporting Countries and allied producers have consistently said that the key objective is to normalize swollen inventories. The alliance cut output by 10 million barrels a day last April, or roughly 10% of global supplies, and is now in the process of carefully restoring some of the halted barrels.

Also on rt.com
OPEC+ agrees to ease oil production cuts as it bets on increased demand amid Covid pandemic recovery

As demand picks up further, global inventories will decline at a rate of 2.2 million barrels a day in the second half of the year, propelling Brent crude to $74 a barrel or even higher, according to Citigroup projections. “Gasoline sales are ripping in the US,” said Morse. “Demand across all products will hit record levels in the third quarter, pushed up by demand for transport fuels and petrochemical feed-stocks.”

International benchmark Brent crude was trading at $66.69 a barrel as of 09:10 GMT on Monday. The price of West Texas Intermediate stood at over $63 per barrel.