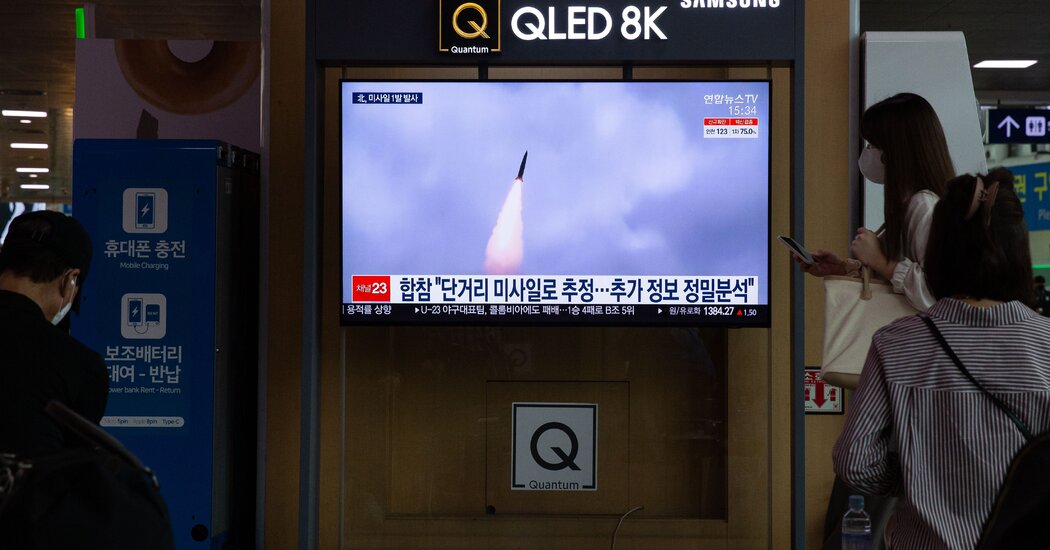 SEOUL — North Korea launched a ballistic missile off its east coast on Tuesday, just hours after special envoys on North Korea met in Washington to discuss how to deal with the isolated country’s nuclear capabilities.

The test was the latest in a series of recent provocations from North Korea in recent weeks, forcing the National Security Council of South Korea to discuss the North’s steady acts of aggression in the region.

The South Korean military said that the missile was fired from Sinpo, a city on the east coast where North Korea has often conducted its missile tests. It also has a naval base in the area, which is home to its submarine-launched ballistic missile program.

South Korea’s military provided no further details of the test while its officials continued to analyze data collected from the launch. The National Security Council at the South’s presidential office usually convenes when the North conducts a missile test, in order to assess the danger posed by the latest North Korean missile launch.

North Korea conducted its last missile test on Sept. 30, when it test-launched a newly developed antiaircraft missile. Outside officials and analysts closely watch North Korean weapons launches because some of the country’s missiles are capable of carrying nuclear warheads.

North Korea’s weapons have become a growing security concern in the region. The country has conducted eight missile tests this year, including missiles launched from trains rolled out of tunnels and what the North claimed was a hypersonic missile. Last week, it showed off its growing arsenal of missiles in one of its largest-ever exhibitions of military gear, as its leader, Kim Jong-un, said he didn’t believe repeated assertions by the United States that it harbored no hostile intent toward his country.

Multiple resolutions by the United Nations Security Council ban North Korean from developing and testing ballistic missile technology. In 2017, North Korea test-launched three intercontinental ballistic missiles and conducted its sixth underground nuclear test. By the end of that year, Mr. Kim claimed that his country had the ability to launch a nuclear strike against the continental United States.

He then met with President Donald J. Trump three times to push the United States to ease sanctions. Their diplomacy collapsed without an agreement on rolling back the North’s nuclear weapons program or lifting international sanctions imposed on the country.

Mr. Kim has since resumed his missile tests. During a meeting of the North’s ruling Workers’ Party in January, Mr. Kim provided a detailed list of weapons that he said his country was developing to help counter foreign aggression.

Sung Kim, Washington’s special envoy on North Korea, renewed his call for dialogue on Monday with Pyongyang when he met with his South Korean and Japanese counterparts in Washington. He reiterated that the United States held “no hostile intent” toward the North, and urged the country to return to talks “without conditions.”