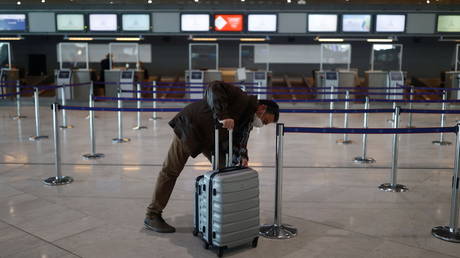 International air passenger demand plunged 88.7% in February compared with the pre-Covid levels of February 2019, in a further drop from the 85.7% year-to-year decline recorded in January, said the global airline industry body.

According to a Wednesday report by the International Air Transport Association (IATA), that’s the “worst growth outcome” since July 2020. Performance in all regions worsened compared to January 2021.

Total demand for air travel in February 2021 (measured in revenue passenger kilometers) was down 74.7% compared to February 2019. That was worse than the 72.2% decline recorded in January 2021 versus two years ago.

“February showed no indication of a recovery in demand for international air travel. In fact, most indicators went in the wrong direction as travel restrictions tightened in the face of continuing concerns over new coronavirus variants,” said Willie Walsh, IATA’s Director General.

Also on rt.com
Flight attendant demands that family GET OFF plane because their toddler isn’t wearing a mask (VIDEO)

Data show that Asia-Pacific airlines’ February traffic was down 95.2% compared to February 2019. The region continued to suffer from the steepest traffic declines for an eighth consecutive month, IATA said.

European carriers recorded an 89% decline in traffic in February versus February 2019, substantially worse than the 83.4% decline in January compared to the same month in 2019.