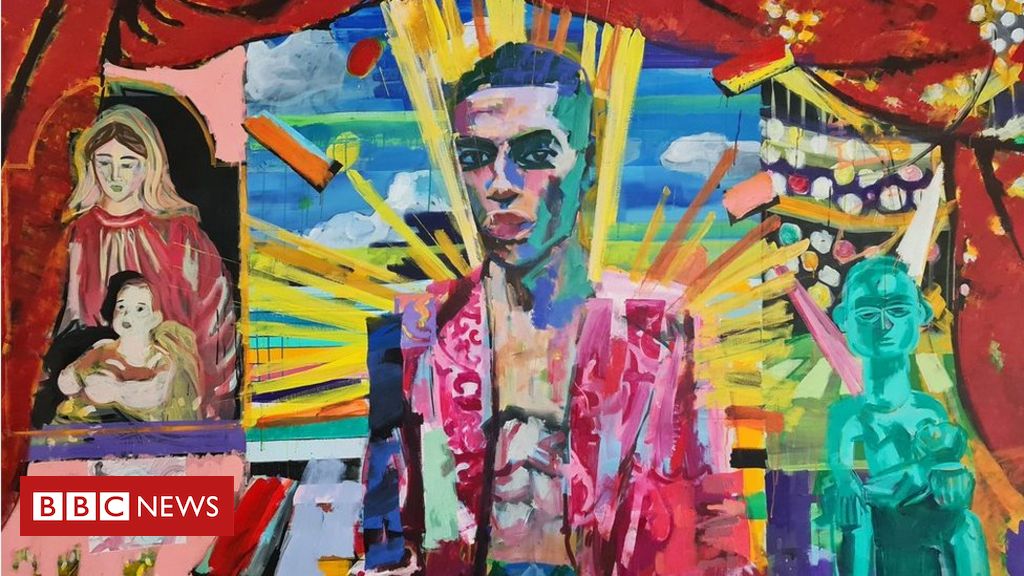 In our series of letters from African journalists, Ismail Einashe shines a light on the often-overlooked artistic talent coming from the east of the continent.

For many years, the cultural spotlight in Africa has seemed to be stubbornly focused on the west or south of the continent rather than East Africa.

And yet from Sudan and Ethiopia to Somalia, Kenya and Tanzania, this large, ancient and multifaceted region is brimming with unique histories, peoples and stories.

Much of this cultural verve is centred on Kenya’s capital Nairobi, which has emerged as a creative hub.

The city boasts the annual East African Art Auction, the largest in the region that has taken place since 2013. This auction has put the city on the contemporary art map in Africa despite stiff competition from Cape Town and Lagos.

Nairobi is also an anchor for those fleeing conflict across the region. In the process they have created one of the continent’s most exciting art scenes.

One such person is the Sudanese artist Eltayeb Dawelbait, who took refuge in the city after fleeing the authoritarian regime of Omar al-Bashir and a hostile environment for artistic expression in Sudan.

In the two decades Eltayeb has lived in Nairobi, his artwork has been able to thrive with stunning results.

Working from his studio in the Westlands district of the city, his work is inspired by his rural Sudanese upbringing and the everyday encounters he has in Nairobi through portraits or simply objects he has found or recycled.

For example, for his 2019 piece Encounter, he depicts the male and female form painted on a set of doors discovered in the fabric of Nairobi, the paints are natural, which he himself mixes.

He is known for his inventive use of such materials, not only resurrecting these objects sourced from his beloved Nairobi, but reimagining their histories through his artistic practice.

“You find a lot of different artists from countries around the world living in Nairobi. It is very inspiring – you can see new artists with new styles every day and that makes me happy, it encourages me,” he told me when I interviewed him for a recent episode of Stance, a podcast about arts and culture.

And Eltayeb is not alone.

In Mogadishu, Italian-born Somali architect Omar Degan is re-examining the recent histories of a city ravaged by war.

Through his practice and contemporary documentation of decimated monuments and buildings, we get a different view of Mogadishu – not just a shell of a city synonymous with war, but a city made up of a unique architectural legacy rooted in ancient, colonial and post-colonial times.

When we met on Stance, he spoke of the conflict in Somalia not only destroying the buildings and roads, but also destroying a “sense of belonging”. For him, in order to recreate all this in particular, Somalis need buildings “they recognise as their own”.

This burgeoning cultural output has been noticed in the West as well. US-based Ethiopian writer Meron Hadero has become the first person from her country to win the prestigious AKO Caine Prize for African Writing.

Judges described her short story, The Street Sweep, as “utterly without self-pity”, and said it “turns the lens” on the usual clichés. It is about an Ethiopian boy called Getu, who has to navigate the fraught power dynamics of NGOs and foreign aid in the capital Addis Ababa.

Last year, another US-based Ethiopian writer, Maaza Mengiste, was shortlisted for the Booker Prize for her brilliant novel The Shadow King. Set during fascist Italy’s 1935 occupation of Ethiopia, it centres on the lives of women fighters.

Hadero’s prize follows that of the Ugandan Jennifer Nansubuga Makumbi, who in May won the Jhalak literary prize for British or British resident writers of colour with her novel The First Woman, a coming of age story of a young girl set during the brutal rule of Idi Amin in Uganda.

And in 2020, the noted US-based Somali chef Hawa Hassan released a widely acclaimed cookbook In Bibi’s Kitchen that spotlights the cuisine of East Africa, putting the region on the international culinary map.

Meanwhile, the Royal Academy of Arts in London is currently hosting a major exhibition by Kenyan-born figurative painter Michael Armitage.

His striking, lush and magical exhibition brings together 15 of his large-scale paintings from recent years that unpack the people, stories and landscapes of East Africa.

Despite these recent successes, East Africa remains underrated for its cultural weight, with much of the media’s attention continuing to focus on war, conflict and displacement.

This sadly misses the cultural growth taking place in cities across the region, from Addis Ababa, to Khartoum to Mogadishu – a city, though scarred by war that now hosts a literary festival, a new art museum and theatre.

I travel widely in this region from Dar es Salaam and Mombasa to Hargeisa and I am always struck by how many brilliant artists, writers and musicians there are here, and am also struck by the need for their work to be more widely known and appreciated.

It is a region fizzing with creative flare, imagination and boldness that deserves to be recognised and celebrated.

All photos subject to copyright.