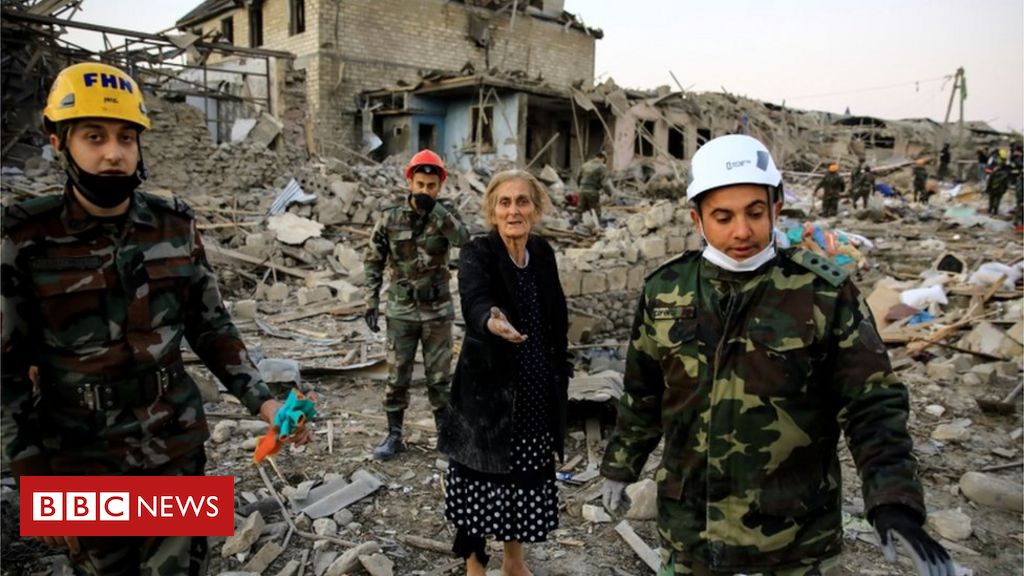 Armenia and Azerbaijan have accused each other of attacking residential areas as the conflict over the disputed Nagorno-Karabakh region rages on.

Azerbaijan said an Armenian missile had killed at least 13 civilians in Ganja, a city far from the front lines.

It is the capital of the Nagorno-Karabakh region, internationally recognised as part of Azerbaijan but run by ethnic Armenians.

A six-year war over the territory ended in 1994 with a ceasefire but not a peace treaty.

Fighting flared last month and has killed hundreds of people. Both sides signed a Russian-brokered truce last weekend, but the conflict has continued.

Officials in Azerbaijan announced on Saturday that at least 13 people had been killed and more than 40 injured after a missile struck populated areas in Ganja, the second-largest city in the country.

About 100 rescuers are working to reach people believed to be trapped under the rubble, BBC Azeri reported.

A foreign ministry statement accused Armenia of “deliberate and indiscriminate targeting of civilians”.

Defence ministry spokeswoman Shushan Stepanyan posted a video on Facebook which she said showed devastation in the Nagorno-Karabakh region.

“At night, once again violating the humanitarian ceasefire, the Azerbaijani Armed Force struck with missiles at [civilians]… including the capital Stepanakert.”

What’s the latest on the ground?

In a televised address on Saturday, Azerbaijan’s President Ilham Aliyev denied attacking civilians while accusing Armenia of destroying or damaging “more than 2,000 houses” in Azerbaijan.

He also said that his country’s forces had taken the city of Fuzuli and seven villages in Nagorno-Karabakh.

“Our revenge is on the battlefield,” he said. “The Azerbaijani army is achieving its goal, no force can stop us.”

“This is not a statement of despair or desperation. I provide this information because I am committed to tell our people the truth,” he said.