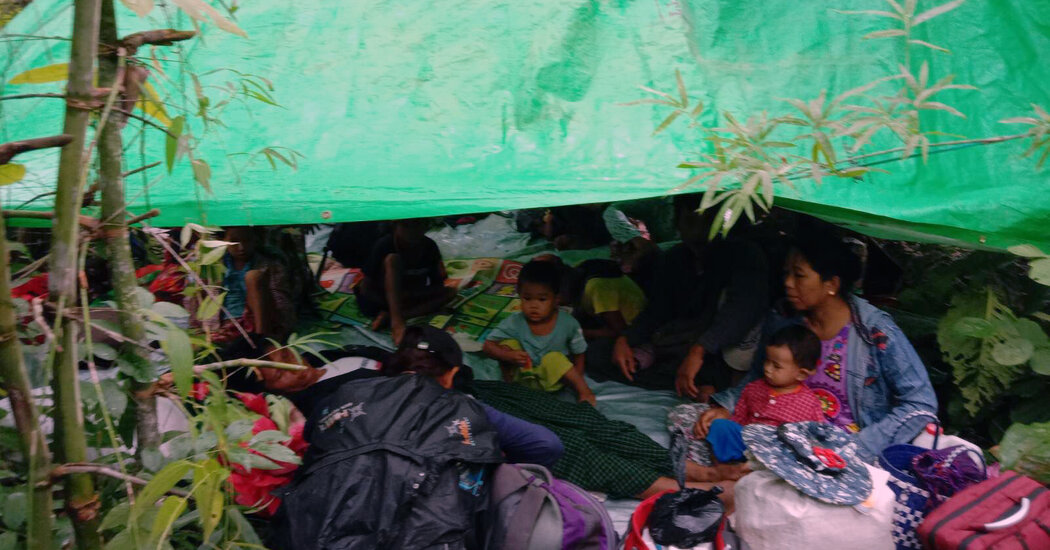 The Myanmar soldiers attacked the village of Yay Shin, deep in the furrows of the Himalayan foothills, just after dusk, descending with flamethrowers and heavy weaponry.

Clutching aging AK-47s smuggled from India and Thailand, members of a self-proclaimed Peopleâ€™s Defense Force returned fire so the rest of the villagers could scramble into the hills, several residents said by phone.

Eight bodies of villagers were later found, along with those of eight soldiers who were killed in battle. By the time the 77th and 99th Battalions left Yay Shin this month, little of the village in northwestern Myanmar remained, just smoldering ruins of a hamlet that had dared to take up arms against the militaryâ€™s February coup.

Seven months after ousting Myanmarâ€™s elected government, the countryâ€™s fearsome army, known as the Tatmadaw, is ramping up attacks on a largely improvised armed resistance, and on the villages where its members live. It is a pattern of slaughter that the Tatmadaw has inflicted for decades on various ethnic minorities, such as the Rohingya, whose forcible expulsion from the country the United States considers to be ethnic cleansing.

Now, the Myanmar army is targeting a much broader segment of society, and its brutal campaign has galvanized a more robust resistance, even if civilians are again caught in the crossfire. Nearly everyone who lived in Yay Shin is now camped out in a forest valley rife with poisonous snakes, malaria and dengue, children whimpering from hunger and the damp cold. Residents of dozens of other villages in the Kalay region, a stronghold of opposition to the military, have also fled to the jungle, according to members of the Peopleâ€™s Defense Force.

â€œWe have already given our lives for the country,â€ Ko Zaw Win Shein, a company commander for the rebels, said by phone from a jungle hide-out, as the thrum of army helicopters reverberated overhead. A former employee of a telecom company, Mr. Zaw Win Shein needed nearly 10 minutes to compose himself before his ragged sobs subsided to a frightened whisper.

â€œWe are more afraid of the soldiers than the snakes,â€ he said.

Last week, a few days after the Yay Shin raid, the National Unity Government â€” a shadow government set up by opposition politicians â€” redoubled its call for an armed insurrection, announcing that â€œD-Dayâ€ had arrived. Duwa Lashi La, its acting president, said in a video disseminated on social media that it was time for â€œa nationwide uprising in every village, town and city, in the entire country at the same time.â€

The video seemed to galvanize a populace that is largely united against the military regime, which has gunned down more than 1,000 protesters and bystanders since the coup. Local militias issued renewed battle cries, while civilians across Myanmar expressed enthusiastic support on social media.

Maj. Gen. Zaw Min Tun, the juntaâ€™s spokesman, dismissed the call to arms as â€œan empty statement.â€ But the Tatmadaw quickly escalated its raids on villages like Yay Shin, targeting dozens of them as it looked for members of the Peopleâ€™s Defense Force, residents said.

On Thursday, the Tatmadaw descended on Myin Thar village, about 25 miles from Yay Shin, and rounded up males who had stayed to guard the community, armed with homemade hunting rifles. At least 17 of them, mostly boys, were killed with single shots to the head, said Ko Htay Win, a Myin Thar resident who escaped to the forest.

â€œI am proud that he died defending the village, said Ma Nyo Nyo Lwin, the mother of Ko Htet Naing Oo, 18, who was among those killed.

The National Unity Government has said that it had no choice but to urge an armed rebellion. Operating from hiding, the shadow authority has not convinced a single country to recognize it as legitimate, and hopes are not high that much will change when the United Nations General Assembly convenes this week.

The United States and Britain have urged all parties in Myanmar to refrain from violence, as has a panel of international experts.

â€œViolence is the cause of the suffering of the people of Myanmar, it is not the solution,â€ said Chris Sidoti, a former Australian human rights commissioner who is on the panel. â€œWe empathize with the National Unity Government but we fear for what will happen as a result of this decision,â€ he added, referring to the call to arms.

Pockets of armed rebellion have proliferated across Myanmar for months, from the rural Buddhist heartland and the border regions dominated by ethnic minorities to the cities, where the return of military rule, after a decade of economic and political reforms, has angered a young generation that had grown used to interacting with the outside world.

Thousands of civilians, some of them young city-dwellers more familiar with video games than real warfare, have received secret military training. Along with ethnic rebels who have fought the Tatmadaw for decades, they have helped to fill the ranks of the Peopleâ€™s Defense Force.

The shadow government said that the Peopleâ€™s Defense Force killed more than 1,320 soldiers in July and August. The statement was impossible to confirm, in part because the Tatmadaw does not release its own casualty numbers, lest morale in its ranks, already low, sink further.

After the â€œD-Dayâ€ proclamation last week, the resistance sabotaged more than 65 telecommunications towers owned by Mytel, a military-linked company, said Ko Kyawt Phay, a spokesman for the Peopleâ€™s Defense Force in the central city of Pakokku.

On Thursday, an army convoy in Yangon, the countryâ€™s largest city, was attacked with grenades, a strike that many believe was also carried out by the Peopleâ€™s Defense Force. In recent weeks, shadowy killings of local government officials and suspected informers have also unsettled people loyal to the military.

Much of the fiercest resistance is happening in the remote regions where Tatmadaw artillery fire has driven whole villages into the forest. Grainy pictures shot on cheap cellphones show dazed families from Yay Shin squatting on the forest floor with a few possessions scattered around them, like a cooking pot and a bedroll sodden with rain.

â€œNow, I only hear the sound of bombs and gunshots,â€ said U Zaw Tint, a carpenter from Yay Shin. â€œThose sounds are stuck in my head.â€

Ma Radi Ohm, a university lecturer, is part of a civil disobedience movement that has deprived the military government of hundreds of thousands of educated workers for seven months, in hopes that administrative paralysis will break the junta. So far, the military has only hardened its crackdown.

This month, Ms. Radi Ohm, protected by members of the Peopleâ€™s Defense Force, slipped into the forest to give basic medical care to the residents of Yay Shin and other Kalay villages. At least 15 women from Yay Shin are pregnant, and one has miscarried because of the stress, she said. Lacking shelter, many people sleep under trees, leaving them prey to mosquitoes.

Children have fallen sick with what Ms. Radi Ohm believes is dengue, although she cannot carry out tests. Equally worrisome, she said, at least 1,000 of an estimated 7,000 people in various jungle encampments in Kalay are showing symptoms of Covid-19, such as a loss of taste and low oxygen levels. Myanmar has been devastated by the Delta variant, and the military is denying care to those thought to support the resistance.

The distance between forest camps is at least 10 miles. Ms. Radi Ohm treks by foot, through swollen streams and on trails made slippery by rain. When Tatmadaw helicopters or drones swoop over the canopy, the villagers dive under boulders or big trees, witnesses said. Military airstrikes have killed dozens.

â€œI just hope that I can help some people from dying of disease and miscarriage,â€ Ms. Radi Ohm said. â€œItâ€™s heartbreaking.â€