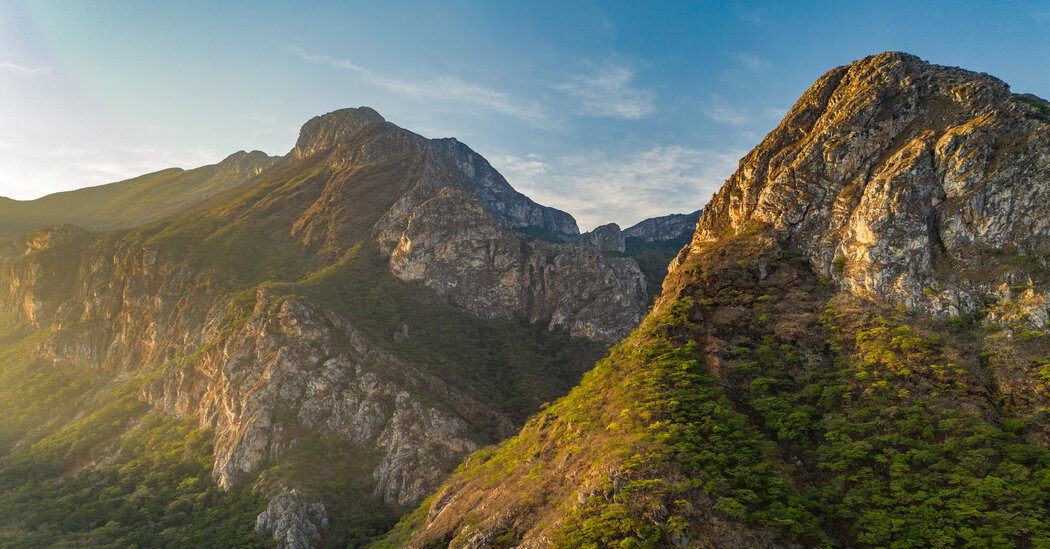 When you stand in the Chimanimani Mountains, itâ€™s difficult to reconcile their present serenity with their beleaguered past. From the valleys below, enormous walls of gray stone rise above dense deciduous forests. Hidden among various crevices are ancient rock paintings, made in the late Stone Age by the San people, also known as Bushmen; they depict dancing men and women, and hunting parties chasing after elephants. Thereâ€™s even a painting of a crocodile so enormous that it may forever deter you from the riverbank.

As you climb higher, toward Mount Binga, Mozambiqueâ€™s highest peak, the forests flatten into expanses of montane grasslands. Wild, isolated, lost in time, itâ€™s a place where rich local traditions live on, where people still talk about ancestral spirits and sacred rituals. A local guide there once told me about a sacred mountain, Nhamabombe, where rainmakers still go to make rain.

Itâ€™s not everyday that a country with a past rife with war and environmental destruction fulfills an ambitious conservation goal. But thatâ€™s exactly what happened last year in Mozambique when, after overhauling its environmental code, the country officially designated Chimanimani as a new national park.

Mozambique has seen its share of heartache, and Chimanimani is no exception. After the country gained independence from Portuguese colonizers in 1975, it was plunged into civil war. As many as one million Mozambicans died. So, too, did untold numbers of wild animals, which were hunted for their meat or whose parts were traded for weapons.

The Chimanimani Mountains became a frontline, and their mountain passes became transits for guerrilla soldiers during both the Rhodesian Bush War, which lasted from 1964 until 1979, and the Mozambican Civil War, which stretched from 1977 until 1992.

Located on the Zimbabwe border about 90 miles southwest of Gorongosa, Mozambiqueâ€™s most famous national park, Chimanimani National Park marks the latest triumph in an environmental renaissance for a country where, just 30 years ago, armies were still funding wars with the blood of poached wildlife.

Across the country, Mozambiqueâ€™s national parks authority, the National Administration of Conservation Areas, is working with private partners to bolster wildlife numbers and restore ecosystem function. The most prominent projects are in Gorongosa National Park.

In part because of the countryâ€™s history of conflicts, Mozambiqueâ€™s biodiversity is poorly studied, and biological expeditions have been sparse. Consequently, a first step was to launch two biodiversity surveys in Chimanimani, led by Dr. Piotr Naskrecki, the director of the E.O. Wilson Biodiversity Laboratory at Gorongosa, and funded by BIOFUND, a nonprofit dedicated to conservation, and Fauna & Flora International, an international wildlife conservation organization. The expeditions involved scientists from seven countries, including several from Mozambique.

As a doctoral student completing my field research in Gorongosa, I participated as the mammal expert on the annual biodiversity surveys. After finishing my Ph.D. in 2018, I shifted to a career in photojournalism. I went on my last two biodiversity surveys in 2018 and 2019 â€” first in Chimanimaniâ€™s buffer zone, then in the heart of Chimanimani â€” as the photographer.

These surveys are like biological treasure hunts. Scientists, each with a different specialty, are let loose in the landscape to unearth as many species as they can.

The mammalogists set camera traps for large mammals like antelope, live traps for small mammals like rodents, and mist nets for bats. The ornithologists arm themselves primarily with binoculars, their ears and an astonishing memory for bird songs. By day, the entomologists sweep their butterfly nets in the grassland and, by night, often stand at a light surrounded by clouds of insects, picking them out of their hair and waiting for something interesting to land.

The herpetologists, or reptile and amphibian specialists, shoot rubber bands to temporarily stun lizards, dive into knee-high water after agile frogs, and generally avoid being bitten by venomous snakes while far away from medical care.

By contrast, the botanists have a tranquil task: thereâ€™s something relaxing and almost elegant about strolling across the mountainside, inspecting beautiful flowers and pressing some in paper for posterity.

Biodiversity surveys are not for the faint of heart, and they cast more than a little doubt on the idea that scientists are all boring nerds in lab coats.

Through the years, I myself have been bitten by a tarantula, several bats, a mouse, countless insects and even a (nonvenomous) snake. Once, back in New Jersey after a survey, a doctor flushed my ears when I complained of muffled hearing. Out poured dozens of tiny, wax-entombed insects in various shapes and sizes. (The experts often wear plugs in their ears while standing at the insect light for this exact reason.)

Thereâ€™s something about this change of pace that Iâ€™ve always found immensely appealing. In the cool Chimanimani mornings, the scientists who didnâ€™t have to be up before dawn chasing their species would lounge, sipping instant coffee from plastic mugs and watching the clouds cast shadows onto the giant rock dome.

Featuring a diverse set of rare and endemic avian species, Chimanimani is a bird-watcherâ€™s paradise. At Rio Nyahedzi, a camp some 4,000 feet above sea level, the surveyâ€™s ornithologists found the bokmakierie, a bird that was last seen in Mozambique in the 1970s. (Nyahedzi is close to Mount Binga, which lies directly on the border between Mozambique and Zimbabwe.)

As the park gets more attention, it will also attract hikers and rock climbers. Some of the parkâ€™s most beautiful waterfalls are 15 miles from the nearest road, and you can hike for days without seeing another human being. The park vibrates with solitude, adventure and discovery.

At the end of the two surveys, scientists in Chimanimani had found more than 1,400 species: 475 plants, 43 mammals, 260 birds, 67 amphibians and reptiles, and at least 582 species of insects. Some are new to science.

â€œIt was amazingly productive as a rapid survey,â€ said Rob Harris, of Fauna & Flora Internationalâ€™s Mozambique program, emphasizing that the discoveries took place in a relatively short period of time.

Like all wild places, Chimanimaniâ€™s future is anything but certain. Endemic species are particularly threatened by climate change; because of their restricted range, they donâ€™t have anywhere else to go as conditions become unsuitable. And human population growth will continue to jeopardize the fringes of the park. â€œThe deforestation outside the park and in the buffer zone was alarming,â€ said Zak Pohlen, an ornithologist.

But as I reflect on these surveys and my time in Mozambique, I canâ€™t help but feel full of hope. I am inspired every day by the passion of young Mozambican conservationists to safeguard their countryâ€™s disappearing wilderness. And most of all, Iâ€™m inspired by their optimism.

One of the goals of these surveys is to train young Mozambicans to take over leadership roles in conservation. Ana Gledis da ConceiÃ§Ã£o, a Mozambican mammalogist, for example, spent several years assisting me in surveying mammals; by 2019, she was co-leading the mammal team with Mnqobi Mamba, a masterâ€™s student at the University of Eswatini.

Ms. da ConceiÃ§Ã£o says sheâ€™s exactly where sheâ€™s supposed to be â€” a young scientist who fights for the conservation of biodiversity. â€œI want to invite young people like me to embrace this cause for the good of all of us,â€ she said.

â€œIn spite of everything,â€ she added, â€œMozambique has much to contribute to the future of conservation.â€