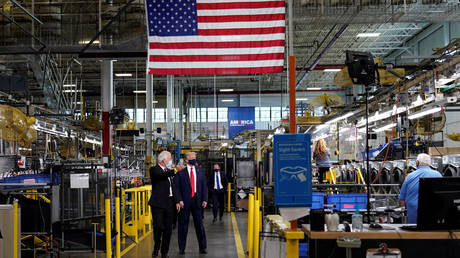 A report by consulting firm Kearney found that USâ€™ trade war against China hasnâ€™t achieved the key objective of reversing Americaâ€™s decline in manufacturing. Jobs havenâ€™t returned to the US, it said.

Statistics showed that tariffs did succeed in reducing the trade deficit with China in 2019. However, the overall US trade imbalance was bigger than ever and has continued climbing, soaring to a record $84 billion in August as US importers shifted to cheaper sources of goods from Vietnam, Mexico and other countries.Â

The trade deficit with China has risen more due to the pandemic, and is currently back to where it was at the start of the Trump administration.

â€œThe move by the US administration to impose a 25 percent tariff on selected goods from China disrupted the global supply chain and slowed the growth of the worldâ€™s largest manufacturing site, intensifying the relationship between these top economic superpowers,â€ said the report.

Also on rt.com
Boom Bust explores why thousands of companies are suing US government over its trade war with China

By early 2020, even before the pandemic reached the United States, manufacturing job development had stalled out, with factories cutting staff.

Meanwhile, President Trumpâ€™s trade advisers argue the tariffs succeeded in forcing Beijing to aÂ phase one trade deal, with the Chinese government having agreed to buy more US goods. They also say that tariffs, whichÂ remain on about $370 billion in Chinese goodsÂ annually, will over time force China to end unfair practices and help rebuild the US manufacturing base.