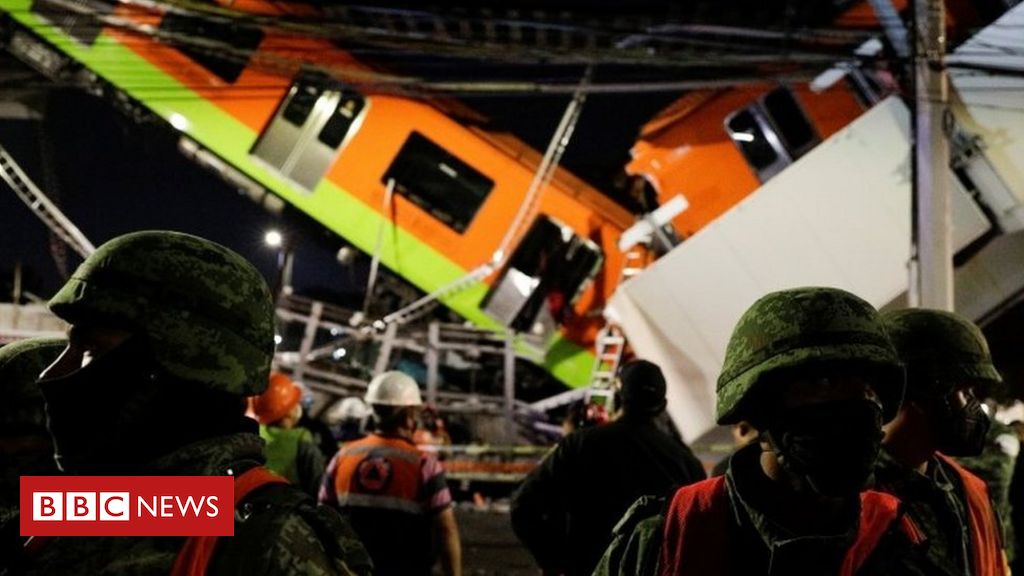 At least 23 people have been killed and dozens injured after a metro overpass collapsed in Mexico City while a train was travelling on it, officials say.

Several train carriages plunged to the ground, crushing at least one car, which was on a busy road underneath.

Rescue workers and firefighters are searching for survivors after the accident in the capital late on Monday.

Dramatic footage has emerged showing the overpass collapsing at the Olivos station on the metro’s Line 12.

Local residents had reported cracks in the structure after a deadly 2017 earthquake, according to local media. Mexico’s El Universal newspaper says transport authorities made repairs following the reports.

Mexico City Mayor Claudia Sheinbaum later said 23 people were confirmed dead, after she arrived at the crash site to co-ordinate the search and rescue operation.

There are fears that the death toll could rise further as some people may still be trapped under the rubble.

“We only heard a loud thunder, and everything fell apart,” 26-year-old Mariana, who survived the crash, told El Universal.

“There were many people standing and sitting in the carriage,” she said, adding that she hit the carriage’s roof.

“As I wasn’t seriously hurt, I helped other people get out through the window,” Mariana said.

One eyewitness told Mexico’s Televisa TV network: “Suddenly I saw that the structure was shaking.”

“When the dust cleared we ran… to see if we could help. There were no screams. I don’t know if they were in shock,” the witness said.

Mexico City’s metro system is one of the most used in the world, carrying tens of millions of passengers a week. In North America, only New York’s subway carries more people every day.

Yet the incident didn’t occur on one of the older lines, which have been through at least two major earthquakes in the past 35 years. Rather it happened on Line 12, completed as recently as October 2012.

There will be difficult questions for the mayor’s office to come about the construction of the line, including for several former mayors.

They include Mexican Foreign Minister Marcelo Ebrard, who was in office when Line 12 was unveiled and who championed the metro’s expansion.

However, those questions must wait until later. Tonight is solely about the rescue operation as Mexicans pray the number of victims doesn’t rise any further.

Mexico City’s metro is one of the world’s largest rapid transit systems, carrying about 1.6bn passengers a year.

Line 12 was the newest addition to the capital’s metro. It officially opened in 2012.

Last year, one person was killed and more than 40 injured in a collision between two metro trains in the city.

Were you in the area? Did you witness what happened? Share your experiences by emailing haveyoursay@bbc.co.uk.