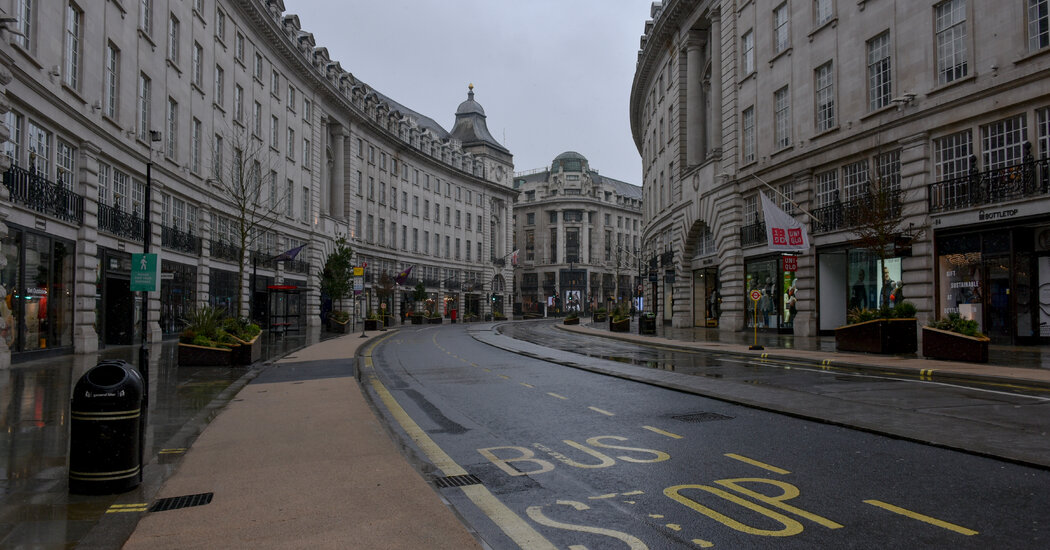 LONDON â€” Britain, hit hard by the coronavirus but surprisingly successful in the race to vaccinate its people, embarked Monday on a new, more hopeful phase of the pandemic, as Prime Minister Boris Johnson announced a step-by-step plan to reopen the economy, starting with schools on March 8.

â€œAt every stage,â€ Mr. Johnson said in an address to the House of Commons, â€œour decisions will be led by data, not dates.â€

Mr. Johnsonâ€™s long-awaited â€œroad mapâ€ was intended to put an exhausted country on a path to normalcy after a highly contagious variant of the virus supercharged infections, filled hospital beds and triggered a third nationwide lockdown.

Under the governmentâ€™s plan, people will be allowed to socialize outdoors by the end of March. But retail shops and gyms in England will stay closed for two weeks after that â€” and most pubs and restaurants for longer still, meaning that, as a practical matter, life will not change much for millions of Britons until well into the spring.

With cases and hospital admissions now falling steeply, and with more than a quarter of the population having gotten a first vaccine shot, Mr. Johnson said the time had come to relax some restrictions. But he cautioned he would move slowly, saying that he wanted this to be the last lockdown that Britain has to endure.

â€œWeâ€™re setting out on what I hope and believe is a one-way journey to freedom,â€ Mr. Johnson said. â€œAnd this journey is made possible by the pace of the vaccine program.â€

For Mr. Johnson, the phased approach is intended to avoid the mistakes of last year, when he often imposed restrictions too late and lifted them too early. In the process he tested the publicâ€™s patience with abrupt reversals, mixed messages and serial lockdowns â€” none of which spared Britain from the highest death toll in Europe.

Now he faces a different problem. His government having injected more than 17 million people with a vaccine â€” and setting a new goal of vaccinating every adult by the end of July â€” Mr. Johnson will be under extreme pressure to fully reopen the economy, which has also suffered more damage than almost any other in Europe.

Lockdown skeptics in his Conservative Party are calling for all restrictions to be lifted by the end of April, when the government aims to have vaccinated everyone over the age of 50, the nine most vulnerable groups.

â€œOnce you have vaccinated the top nine groups, that means you have protected the groups that account for 99 percent of the deaths so far and over 80 percent of hospitalizations,â€ Mark Harper, a former chief whip and member of the so-called Covid Recovery Group in Parliament, told the BBC.

Mr. Johnson cited new data from Public Health England indicating that a single dose of the Pfizer vaccine reduces hospitalizations and deaths by at least 75 percent. Data suggested that the AstraZeneca vaccine also provided â€œa good level of protectionâ€ but was too early to be more precise, he said.

The specific timetable for reopening will hinge on four factors: the continued success of the vaccine rollout; further evidence that the vaccines are reducing hospital admissions and deaths; no new surge in infection rates that would tax hospitals; and no sudden risk from new variants of the virus.

Public-health experts broadly endorsed Mr. Johnsonâ€™s data-driven approach. The rapid progress of the vaccination campaign, they said, had put Britain in a position where it could ultimately hope to treat the coronavirus like measles, a disease in which sporadic outbreaks can be quickly contained with vaccines.

â€œThereâ€™s definitely light ahead,â€ said Devi Sridhar, the head of the global public health program at the University of Edinburgh.

But Professor Sridhar raised concerns about the governmentâ€™s plan to reopen all primary and secondary schools in England on March 8. Scotland, she noted, was opening schools on a staggered schedule to assess the effects of students mixing in classrooms. The first set of pupils went back on Monday.

â€œWe anticipate it will be bumpy even with a graduated return,â€ she said. â€œSending older kids back into classrooms is dangerous.â€

Teachersâ€™ unions immediately objected to the plan, saying it would put their members at risk and urging Mr. Johnson to adopt the graduated approach of Scotland, which is also being used in Wales and Northern Ireland.

The opposition Labour Party has called for teachers to be given priority in vaccinations. But the government has rejected this, saying that, statistically, teachers are no more at risk from the virus than others in the same age groups.

Under Mr. Johnsonâ€™s timetable, the current restrictions would be lifted in four steps, with five weeks between most of the steps. That way, the government would have four weeks to analyze the impact of each relaxation and another week to give notice of the changes to the public and businesses.

All the moves would be made throughout England, with no return to the regional differences in rules that applied last year, depending on local infection rates. The government warned that the dates specified are the earliest at which the restrictions would be lifted, and that the steps may happen later.

When students go back to school, they will be regularly tested while the older pupils will be required to wear face masks. Residents of nursing homes will be allowed one regular visitor, but few other restrictions will be lifted.

Starting on March 29, up to six people will be allowed to meet outdoors, including in backyard gardens. Outdoor sports will be permitted, and though people will still be urged to stay in their areas, they will not be urged to remain in their homes.

Restrictions on foreign travel could also be eased, though that will depend on one of multiple policy reviews being initiated by the government. Others will focus on the potential use of vaccine passports to reopen the economy, and on rules for social distancing measures such as the use of face masks. By June 21 all legal restrictions could be lifted, the government hopes.

It is not the first time Mr. Johnson has promised relief. Last August, he urged people to â€œEat Out to Help Out,â€ even subsidizing their meals to bolster a beleaguered industry â€” a program that seems almost reckless in hindsight. By November, cases were surging again, and he reluctantly imposed another lockdown.

There continue to be risks, including potential future variants that could elude the existing vaccines. But Britain now has a robust vaccination program â€” a crucial extra piece of ammunition that gave Mr. Johnson palpable confidence as he laid out his blueprint for finally putting the pandemic behind the country.

â€œToday,â€ he declared, â€œthe end really is in sight and a wretched year will give way to a spring and a summer that will be very different and incomparably better than the picture we see around us today.â€