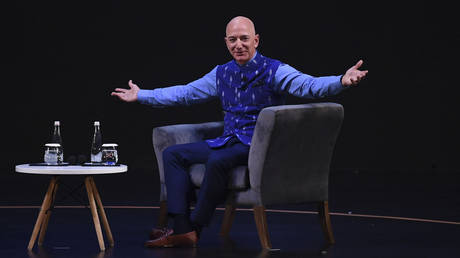 Amazon CEO Jeff Bezos has reclaimed the top spot on the worldâ€™s richest list, winning the title back from Tesla CEO and SpaceX founder Elon Musk just weeks after losing it.

Tesla shares slid over two percent on Tuesday, erasing around $4 billion from Muskâ€™s fortune, according to ranking websitesâ€™ estimates. The drop ended Muskâ€™s six-week reign as the worldâ€™s wealthiest man, according to Forbes, which currently puts his net worth at $173.4 billion, compared to Bezosâ€™ $190.3Â billion.

As a result, Bezos took back the title he had been holding for almost three years before Musk briefly surpassed him. The Amazon founderâ€™s net worth has been surging in recent years along with his companyâ€™s stock price. However, itâ€™s still possible that the two billionaires could trade places again in the near future.

Bezos is getting ready to leave his post as CEO of the online shopping giant later this year to focus on other projects. It comes as Amazonâ€™s business has been booming during the pandemic, with consumers turning to online retailers for necessities amid lockdowns. That previously allowed Bezosâ€™ net worth to hit $200 billion, making him the first man in history to reach the milestone.

Musk has recently been at the epicenter of some of the biggest market events â€“ from a Reddit insurgency against hedge funds attempting to short-sell GameStop stock to the cryptocurrencies’ rally. Almost all of his statements have caused ripple effects in the crypto space, including the recent move by Tesla to invest $1.5 billion in bitcoin, and the billionaire’s vocal support for dogecoin.