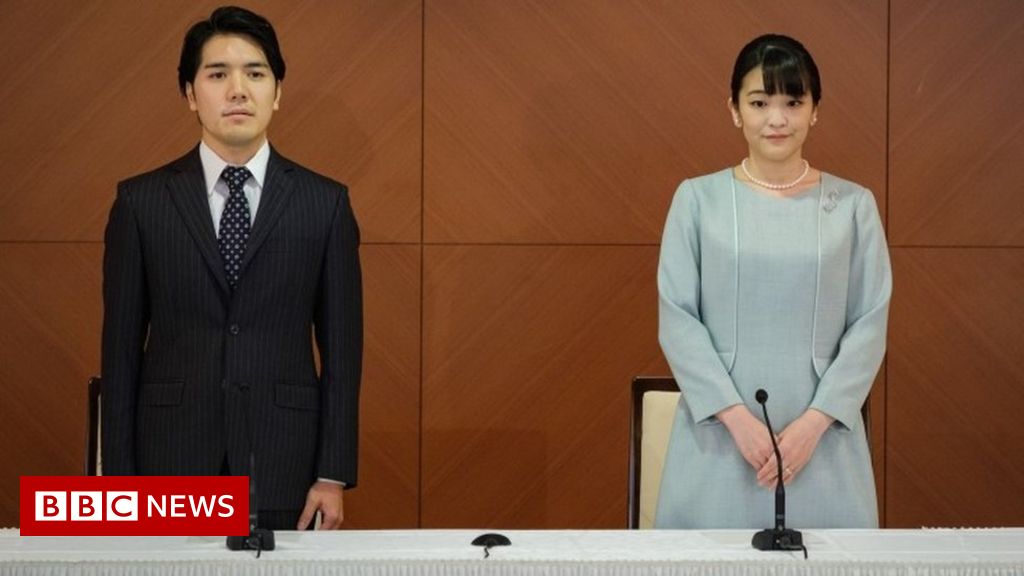 In 2017, when Mako, then a Japanese princess, announced her engagement to a former classmate, Kei Komuro, she said he had won over her heart with “his bright smiles like the sun”.

The two had met five years earlier when they were both university students, and shared their plans to wed the following year. It meant the princess would become an ordinary citizen as female imperial family members forfeit their royal status upon marriage to a commoner.

Their smiles won over a country where the imperial family is closely scrutinised and its members are expected to be a guardian of traditions. The intense media coverage was mostly positive.

But that quickly changed.

Two months later, the first reports emerged about an alleged money dispute between Mr Komuro’s mother and former fiancé, who claimed mother and son had failed to repay a debt.

Public perception soured. With the official explanation that the couple needed more time to arrange their ceremony, their wedding ended up postponed.

The former princess, who is now known as Mako Komuro, is the first child of the current emperor’s younger brother, Prince Akishino, and his wife, Princess Kiko. Born on 23 October 1991, she initially followed royal tradition and attended the elite Gakushuin school, where members of the imperial family usually study.

But she broke with custom by leaving the institution for her university studies. Ms Mako attended Tokyo’s International Christian University, where she studied art and cultural heritage, and spent a year at the University of Edinburgh. Later, she earned a master’s degree at the University of Leicester, an experience she said was “wonderful”.

People close to Ms Mako described her as an independent and friendly woman who had pursued a career while performing imperial duties, a profile by Japan’s Kyodo news agency said.

She first met Mr Komuro, who was also born in 1991, at a meeting of students planning to go abroad in 2012. His humble origins meant that tabloids spent a long time digging dirt on his family. Amid the scandal in 2018, he moved to New York to study law at Fordham University, and the couple reportedly kept in touch through the internet.

He only came back to Japan last September, a return that was not without controversy. Mr Komuro was dressed casually and sporting a ponytail, which for many was another proof that he was not fit to marry the then-princess.

Finally, in October, the couple got married. Ms Mako skipped the usual rites associated with a royal family wedding, and turned down a traditional payment of about $1.3m (£940,000) given to a female member of the royal family upon their departure from the household.

It was another break from tradition, as Ms Mako became the first woman to do so.

Questions over Mr Komuro’s finances remain, despite him saying that the money at the centre of the reports – about $35,000 – had been a gift not a loan but that he would pay a settlement. At least one protest was held at their wedding day, which included placards saying “Protect our household” and “The imperial family is the soul of Japan”.

The excessive press coverage as well as the relentless attacks on social media have had an impact on Ms Mako’s mental health, and she is now suffering from post-traumatic stress disorder, according to the Imperial Household Agency.

At a news conference alongside her new husband after their low-key wedding, Ms Mako said the “incorrect” reports about Mr Komuro had caused her “great fear, stress and sadness”.

“Kei is irreplaceable for me,” she said. “For us, marriage is a necessary choice to live while cherishing our hearts.”

Mr Komuro, who cut off the ponytail before the wedding, vowed to protect and support his wife. “I love Mako,” he said. “I want to spend the only life I have with the one I love.”

The couple are expected to move to the US, where Mr Komuro works as a lawyer. The move has drawn comparisons with British royals Meghan Markle and Prince Harry, earning the newlyweds the nickname “Japan’s Harry and Meghan”.

Ms Mako is expected to remain in Tokyo for some time preparing for the move, according to Reuters news agency. This includes applying for the first passport of her life.

You may also find interesting: