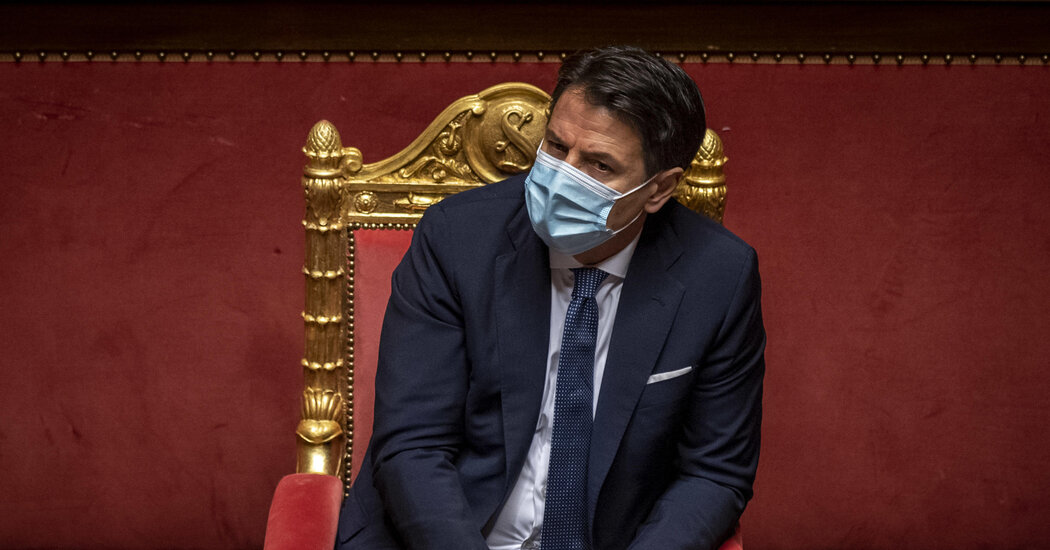 ROME — Prime Minister Giuseppe Conte of Italy resigned on Tuesday after weeks of political infighting, thrusting the country into renewed instability as the coronavirus pandemic ravages lives and livelihoods.

The latest political crisis caught many off guard as the country struggles to cope with the virus, which has already killed more than 85,000 in Italy. As in the rest of Europe, Italy’s immunization campaign has been held up by production delays for the vaccine developed by Pfizer and BioNTech. At the current pace, it would take almost five years to vaccinate the majority of Italians, according to the most recent data.

Mr. Conte’s is serving his second consecutive stint as prime minister — first as the head of an alliance of right-wing nationalists and populists, and then leading a coalition of populists and the center-left establishment that focused almost exclusively on the pandemic.

A change in government would likely shift attention back to issues that have been put on a back burner during the coronavirus crisis, including a more forceful crackdown on illegal immigration, which has slowed dramatically because of the virus.

Mr. Conte met with his cabinet early Tuesday before informing President Sergio Mattarella of his resignation.

Mr. Mattarella will hold consultations with parliamentary leaders on Wednesday afternoon and Thursday morning to determine whether Mr. Conte or someone else could garner enough support to govern, or whether early elections would be the only option.

Opposition parties have been clamoring for elections, which would otherwise be two years away. Polls indicate that nationalist parties would be the likely winners in a new vote.

Mr. Conte stepped down after failing to cobble together enough senators to support his government. Two weeks ago, he lost the support of Italia Viva, the political party of former Prime Minister Matteo Renzi.

At the top of Mr. Renzi’s list of grievances was Mr. Conte’s management of the pandemic, which he said bypassed Parliament, allowing decisions to be based on the reports of unelected task forces.

Echoing Italy’s opposition parties, Mr. Renzi also blamed Mr. Conte for dragging his heels on deciding where to allocate hundreds of billions of euros in recovery funds that Italy is set to receive from the European Union. Italy has until the end of April to submit a plan.

The principal partners of Mr. Conte’s 17-month-old coalition have reiterated their support for the prime minister.

Nicola Zingaretti, the leader of the center-left Democratic Party, which Mr. Renzi once led and which has been a key part of Mr. Conte’s second coalition, said in a Twitter post Monday evening that he was “with Conte for a new government” supported by a “broad base.”

Foreign Minister Luigi Di Maio of the populist Five Star Movement, which brought about Mr. Conte’s appointment as prime minister in 2018, called on supporters to rally around the prime minister.

“There is no doubt — we forge ahead with determination,” he said.

In a note, Fitch Ratings said Tuesday that the crisis “could hinder attempts to agree and implement a credible post-pandemic growth strategy.”

The “failure to enact such a strategy,” the credit rating agency added, including the “efficient use” of the European Union recovery funds, which in turn “would reduce the likelihood that debt/GDP will stabilize and fall.”