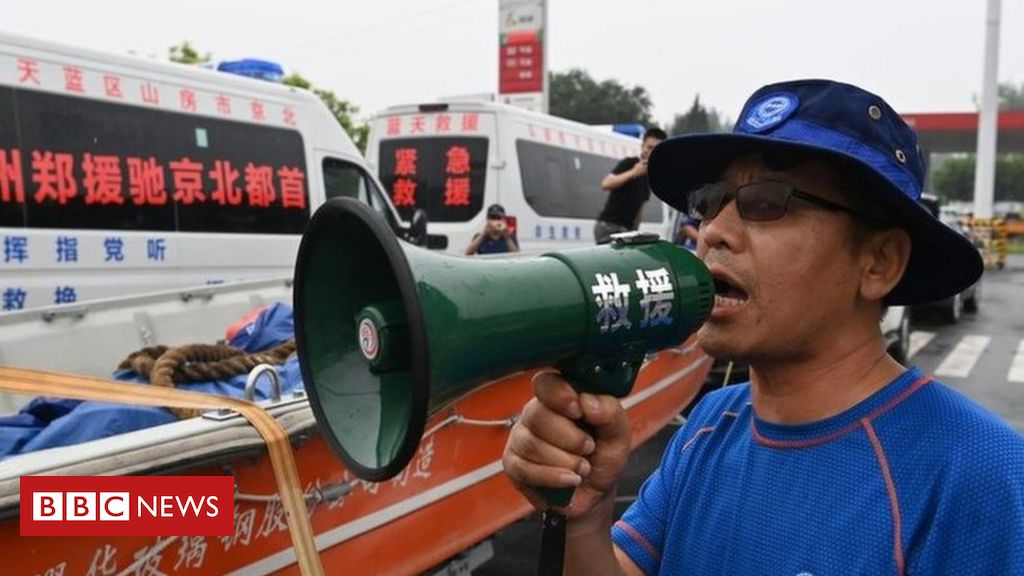 As floodwater crashed through a busy subway station in China on Tuesday, desperate passengers tried to flee while others were swept helplessly off platforms.

In one train carriage, water seeped in and rose from ankle, to waist, to neck-height. Panicked commuters stretched upwards to breathe, while others lifted shorter people into the shrinking air pocket above.

In terrifying videos shared on social media, some passengers can be seen standing on chairs and clinging to the ceiling as the floodwater creeps upwards. One tried to smash a window, before realising that there was even more water outside the carriage.

Some filmed the unfolding tragedy, while others called loved ones or posted pleas for help. “I can’t speak anymore,” one woman wrote on the social media site Weibo. “If no rescue comes in 20 minutes, hundreds of us will lose our lives.”

“We were all standing on the seats, and the water was already on our knees,” a woman who gave her name as Ms Li told Elephant News.

“Some shorter passengers had water up to their necks,” she said, adding that as time went on the air supply began to diminish.

After about an hour, the train carriage was plunged into darkness and the oxygen level waned further. “I was really scared, but the most terrifying thing was not the water, but the diminishing air supply,” one person told Reuters news agency.

After several hours of fear and uncertainty, rescuers were able to gain access through the roof of the carriage and pulled people out. “We knocked on the glass a bit [on the ceiling]. Then suddenly there was air,” an unnamed woman told state broadcaster CCTV.

Hundreds of people were eventually saved from the flooded subway tunnel in Zhengzhou, a city of 12 million people that sits on the banks of the Yellow River in central Henan province.

But at least 12 are known to have died and five were injured in the disaster, which came after the region saw more rainfall in three days than it usually would in a year.

This is a rainy time of year in China and floods happen annually. However, Chinese scientists say global warming has made the situation more dangerous and warn that extreme weather could become more frequent in the future.

In Henan, at least 25 people have died and more than 200,000 have been evacuated. Major roads have been turned into rivers, with cars and debris being swept along by fast moving currents.

Harrowing accounts of the subway tragedy, and of the dramatic flooding around the province, are continuing to emerge, with witnesses describing scenes of fear and chaos.

“At the start there wasn’t much water, then it was like it all started coming at once,” one woman who was on the flooded subway train told the news outlet Pear Video.

“Within about 30 minutes it was up to my shoulders,” she said. “It was hard to breathe. A lot of people fainted.”

The woman, who wanted to remain anonymous, said she was trapped for more than four hours and cried when she was finally rescued.

“There was so much water on the platform, and there was water streaming out of the cracks in the subway doors,” another passenger told Jiupai News.

“I’m quite tall, but after about five minutes, the water was already at my chest,” he said. “Tall people helped short people and children up onto the seats. I was holding someone’s child.”

In one post on Weibo, a woman described the panic in the carriage. “Many people started to suffer breathing difficulties,” she wrote. “I heard a nearby passenger on her phone, giving her bank account details to her family, and thought I should do the same.”

“Water was leaking from the cracks in the door, more and more of it, all of us who could, stood on the subway seats,” another post read.

Dramatic images have also been shared of rescues above ground. Emergency workers have used long ropes to pull people to safety as they were dragged along by gushing currents.

“I was lucky that I stayed at home, but we [still] felt like we were going to be washed away,” Wang Qian told BBC OS from Zhengzhou.

“I’ve contacted all of my family and luckily they’re all safe. “There’s a lot of damage around us. I can see the floods everywhere, lots of cars and water everywhere,” she said.

Rescue efforts are continuing around the province, while further downpours have been forecast for the rest of the week.

“We’re all waiting to see if everything will be OK soon,” Ms Wang said. “We’re very scared.”