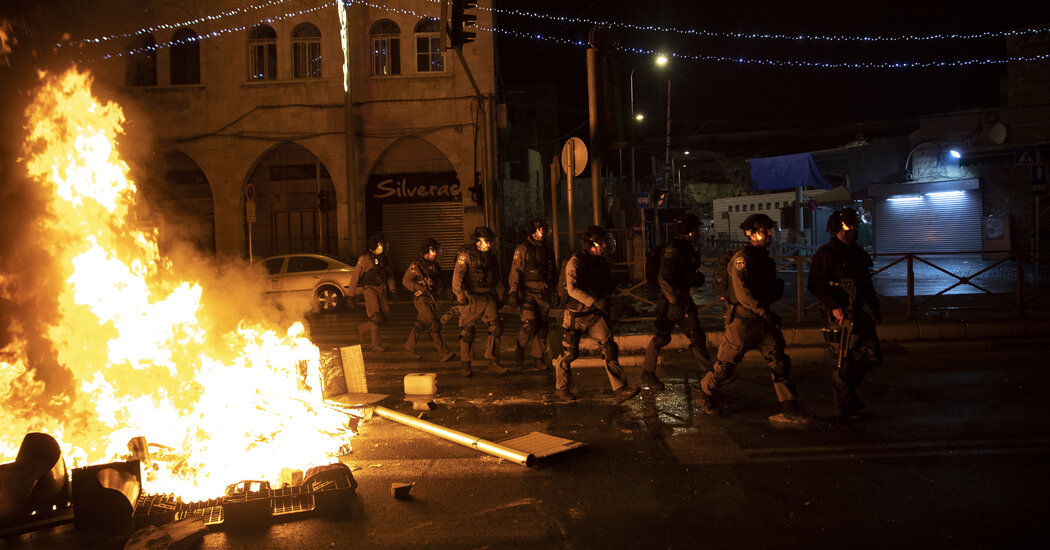 JERUSALEM â€” Clashes between Israelis and Palestinians erupted overnight in Jerusalem as hundreds of supporters of an extremist Jewish supremacy group staged a march, chanting â€œDeath to Arabs,â€ near the Old City.

The violence was the culmination of building tensions between Jews and Arabs in Jerusalem and elsewhere over the past couple weeks. Palestinian media reported that 78 Palestinians were injured and 15 of them were treated in hospitals. About 20 Israeli police officers and at least 16 Israeli civilians were hurt as well.

More than 50 people were arrested in the melee, both in predominantly Palestinian East Jerusalem and mostly Jewish West Jerusalem, according to the police. The cityâ€™s mayor, Moshe Lion, said he had asked the police to ban the extremist groupâ€™s demonstration but had been told that was impossible.

â€œThere is no doubt that it was superfluous,â€ Mr. Lion told Kan, Israelâ€™s public radio. â€œIt did not add to the quiet that we need now.â€

One of the main flash points of violence was the march by hundreds of mostly young, religious supporters of the Jewish supremacist organization Lehava. They had intended to confront young Palestinians who have been clashing nightly with police in the vicinity of the Old City.

The United States Embassy in Jerusalem said it was â€œdeeply concernedâ€ about the violence and called in a statement for â€œresponsible voicesâ€ to urge an end to incitement and to restore calm in the city.

Israeli-Arab tensions have been on the rise since the start of the Muslim holy month of Ramadan about 10 days ago. Fueling the friction, Palestinian youths posted some clips on the video-sharing app TikTok in recent days showing attacks on religious Jews, including one being slapped in the face while riding the light rail in Jerusalem. Another had a drink thrown at him while walking in the Old City.

In the ancient port of Jaffa near Tel Aviv, an Orthodox Jewish man was beaten by Arab residents, setting off protests and clashes there this week.

In response, Jewish youths have been attacking Palestinians in downtown West Jerusalem, and Lehava called for Thursday nightâ€™s march to restore Jewish â€œhonor.â€

Palestinians had already been clashing with the Israeli police in East Jerusalem for several nights after the police prevented them from gathering on the steps in front of Damascus Gate, which form a kind of amphitheater at one entrance to the Old City. The steps have traditionally served as a festive meeting place for youths at night after the breaking of the daily fast during Ramadan.

Overnight between Thursday and Friday, hundreds of police officers, some mounted on horseback, created a buffer between the Jewish and Palestinian protesters, and both camps ended up clashing with the police, who dispersed the crowds with stun grenades and water cannons.

Jews and Palestinians then split off into gangs and roamed the streets on their respective sides of the city looking for potential victims.

Israel annexed East Jerusalem after capturing it the 1967 Middle East war and claims sovereignty over the entire city. The Palestinians want East Jerusalem as the capital of a future state and most of the world considers it occupied territory.

Video clips circulating on social media overnight showed scenes of mob violence such as Palestinians fiercely beating a Jewish driver whose car had been set on fire and Jewish youths stoning a Palestinian home while children cried inside.

By noon on Friday, a tense calm prevailed in Jerusalem. The main evidence of the nightâ€™s violence, besides the heavy police presence, were dozens of stones strewn along the roads, including a main thoroughfare that runs along the dividing line between East and West Jerusalem.

The mayor said that the violence had come after months of what he called exceptional cooperation between Jewish and Palestinian representatives in West and East Jerusalem in efforts to contain to the coronavirus pandemic.

Palestinian leaders blamed Jewish extremists and the Israeli government for the outburst of violence.

â€œEast Jerusalem is the eternal capital of Palestine and is a red line,â€ the office of Mahmoud Abbas, president of the West Bank-based Palestinian Authority, said in a statement on Thursday.

Fatah, the mainstream Palestinian party that dominates the authority, praised the Palestinian residents of Jerusalem for defending the city and the Aqsa mosque, the revered Muslim holy site in the Old City, â€œwith their bare chests.â€

Video images showed Palestinians pouring into the mosque for prayers on Friday chanting â€œAllahu akbar,â€ or God is Great, and â€œMartyrs are marching to Jerusalem in their millions,â€ a Palestinian rallying cry.