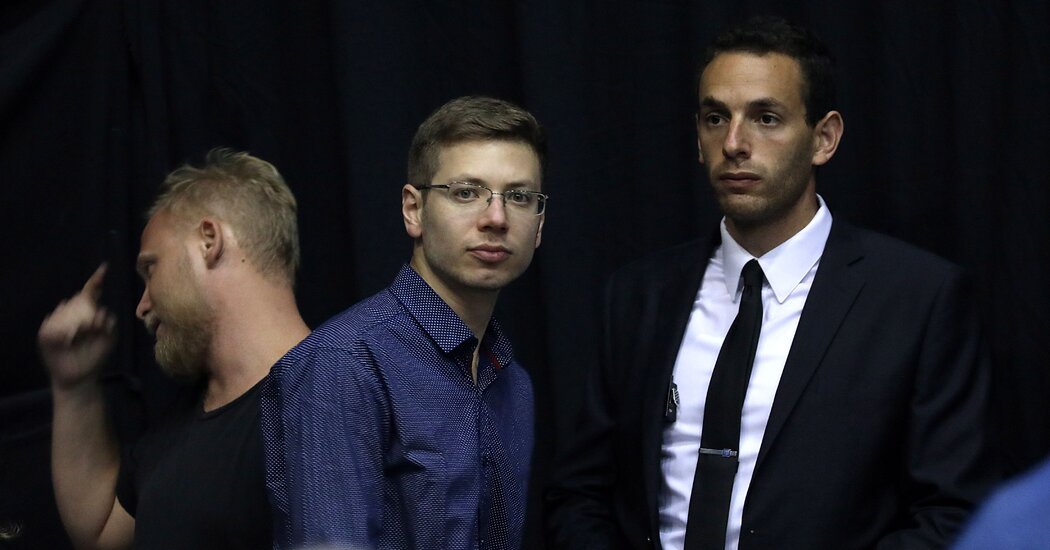 Judge Dorit Feinstein of the Jerusalem Magistrates Court also ordered Yair Netanyahu, to delete the tweet, which called on his more than 88,000 followers to demonstrate in front of the homes of the protest leaders.

â€œI instruct him to refrain for the next six months from harassing the petitioners in every shape, way and form,â€ Judge Feinstein wrote in her decision.

The ruling came a day after large crowds of protesters across the country demanded Mr. Netanyahuâ€™s ouster, criticizing his handling of the economic and health problems stemming from the coronavirus and arguing that he should not be permitted to serve as prime minister while under indictment on corruption charges.

The judge said in her decision that she was concerned the prime ministerâ€™s son would continue to harass the petitioners and infringe on their privacy, adding that he did not rebuke calls for violence that were posted in response to his tweet.

One of the protest leaders, Yitzhak Ben Gonen, who represented himself and the two other petitioners, said that Yair Netanyahuâ€™s tweet prompted incessant phone calls, and that each of the three received death threats from callers.

â€œWe are very happy about this legal victory, but the threats keep coming,â€ said Mr. Ben Gonen, who is a member of A New Contract, an anti-Netanyahu group popularly known as â€œCrime Minister.â€ The group says Mr. Netanyahu should not be able to serve as prime minister while on trial for bribery, fraud and breach of trust. The trial got underway in May, and is still in its initial stages.

Later Sunday, the younger Mr. Netanyahu deleted the tweet, but in a series of other social media posts, he strongly criticized the courtâ€™s ruling, calling it Kafkaesque.

He also contended that courts in Israel would one day ban Israelis from voting for his fatherâ€™s Likud party and order all those on the political right placed in â€œre-education camps.â€

â€œFor a long time, Israel hasnâ€™t been a democratic state,â€ he wrote in another post, remarking that a petitioner, Haim Shadmi, had been recorded speaking about hurling a firebomb at the prime ministerâ€™s official residence but that Mr. Shadmi was still permitted to protest near it. â€œThereâ€™s a law for right-wingers and another law for left-wingers,â€ the Facebook post said.

Yair Netanyahu, 29, is a fierce defender of his father and has a history of stoking controversy through his social media posts, some of which even the prime minister has condemned.

In December 2018, the son wrote on Facebook that he wished the deaths of two Israeli soldiers killed by a Palestinian gunman in the West Bank would be â€œavenged,â€ adding, â€œThere will never be peace with the monsters in human form known since 1964 as â€˜Palestinians.â€™â€ In a separate post at the time, he wrote that he would prefer an Israel without Muslim residents.

Facebook removed those posts following a flurry of complaints. It said they included hate speech and violated its community standards.

In February, Yair Netanyahu posted on Twitter a picture of a young Israeli, Dana Cassidy, who had been photographed earlier with Benny Gantz, the leader of the Blue and White party. He also posted unsubstantiated accusations that Mr. Gantz engaged in extramarital affairs.

The posts prompted some of the sonâ€™s followers to spread unfounded rumors that Ms. Cassidy and Mr. Gantz were having an affair.

Mr. Gantz has repeatedly clashed with the prime minister even though they are now coalition partners.

And in a tweet in May, the prime ministerâ€™s son questioned how Dana Weiss, a well-known Israeli journalist, got her job at Channel 12, a major Israeli television outlet. That tweet led some of Yair Netanyahuâ€™s followers to make unsubstantiated allegations that Ms. Weiss had sexual relations with her bosses to get her position.

The son apologized for that tweet â€” after Ms. Weiss and Channel 12 threatened to file a lawsuit against him.

Mr. Ben Gonen, the lawyer representing his fellow protest leaders, said he sensed that the protests were gaining momentum. â€œWe see young people, who are very angry about the situation in Israel and determined to change it,â€ he said. â€œItâ€™s too early to determine if we will change everything, but I feel that something important and new is happening.â€

Donald Kendall, Pepsiâ€™s Chief During the Cola Wars, Dies at 99