Home World USA Is It Time for a More Ambitious Covid Reduction Target in Canada? 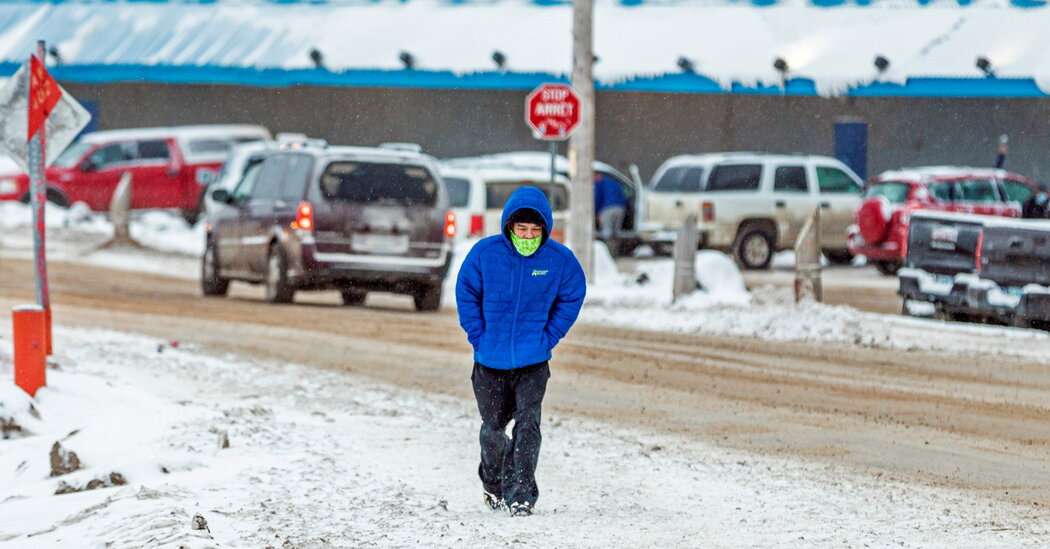 November kicked off with the discouraging news that Nunavut lost its status as the last place in Canada to be free of Covid.

With 74 cases as of Thursday, the vast and medically underserved territory of Nunavut imposed additional restrictions early this week.

Only Atlantic Canada, which is isolated from the rest of the country and the world by province-level travel restrictions, has escaped increasingly grim pandemic news this month. On Friday the federal government said that unless Canadians reduce contact with one another and provinces apply more restrictions the country is on a path to 60,000 new cases a day by the end of the year, about 5.5 times the current rate.

While positive developments in vaccines continue, the time when most Canadians will be inoculated remains far-off. Perhaps as a result, some physicians and scientists are suggesting that the nation aim to do more than flatten the curve graphing new infections.

Around the world, there is a renewed push to outright eliminate new infections, an idea known on social media as #COVIDzero.

I spoke with Dr. Irfan Dhalla, an associate professor at the University of Toronto’s Institute of Health Policy, Management and Evaluation, who raised the Covid-zero idea in a Globe and Mail op-ed in May. At the time, Dr. Dhalla said it was “an educated guess” that trying to eliminate all cases would work better than flattening the curve. But this week, he said, “it’s become clearer and clearer that the countries that set aggressive targets have done better.”

The big question around all this is how aggressive countries need to become. Australia provides one example. Its potential appeal to Canadians is another matter.

Yan Zhuang and Damien Cave, two of my colleagues in Australia, looked at Melbourne’s 111-day hibernation. It eliminated cases in the city of five million but the measures went well beyond anything Canada has seen and included strict curfews and severe travel restrictions.

Yan and Damien found it was “a dizzying and lonely experience that many in Melbourne described as an emotional roller coaster with effects on the economy, education and mental health that will linger.”

“We should look at Covid-zero as a rallying cry for a better approach,” he said. “I don’t personally support a lockdown of the nature that occurred in Melbourne. I think we should keep schools open.”

And Dr. Dhalla isn’t talking about just restricting how people live and work. Vastly improved testing and contact-tracing systems are part of his formula.

So if not Australia, what could the approach look like? Dr. Dhalla said that several Asian countries, particularly Korea, could serve as templates but “the most compelling example is the Atlantic Canada.”

New York Times data showed on Friday that Newfoundland and Nova Scotia had an average of just 0.3 cases per 100,000 people over the previous week, New Brunswick stood at 0.7, and Prince Edward Island had no cases at all.

The chief distinction of Atlantic Canada’s approach is the decision by the four provinces to form a travel bubble among themselves. Most outsiders who enter must quarantine.

For the Opinion side of The Times, Stephanie Nolen, a former foreign correspondent for The Globe and Mail who now lives in Halifax, has written about what life is like in a province with a low case load.

[Read: I Am Living in a Covid-Free World Just a Few Hundred Miles From Manhattan]

British Columbia’s recently re-elected New Democratic government imposed new restrictions this week and Premier John Horgan urged an end to travel among all provinces. Manitoba, where 14 percent of people tested for the coronavirus have a positive result, ratcheted up already-tight restrictions. And on Friday Doug Ford, Ontario’s premier, introduced measures, including limiting retail sales to curbside pickup or home delivery, for Toronto and the neighboring region that includes the cities of Brampton and Mississauga.

But this week, François Legault, the premier of Quebec, went somewhat in the other direction. He said that people in that province would be allowed to gather in groups of up to 10 before and during the Christmas holidays.

It doesn’t take much effort to find people in medicine, science or politics who are, at the very least, skeptical about making Covid-zero Canada’s aim. And some groups have been pushing back against shutdowns.

It’s been difficult to escape ads from Restaurants Canada, a trade group. It has been casting doubt on the idea that infections are spread by indoor dining.

“Our industry is being singled out and we deserve to understand why,” Todd Barclay, the group’s president and chief executive wrote in an open letter. “Accurate transmission data that clearly points to restaurants being the source has not been provided.”

While Dr. Dhalla acknowledged that it is possible to minimize transmission by taking measures in restaurants housed in very large spaces, he said that Canadian, American and international data has clearly shown that indoor dining is a source of transmission. In October, shortly before Toronto ended indoor dining, Dr. Eileen de Villa, the city’s top public health official, said that an outbreak at the Yonge Street Warehouse exposed 1,700 people to the virus.

Even though Dr. Dhalla says it’s necessary to end indoor dining in places where cases are rising rapidly and to do contact tracing there, he makes that recommendation with an important qualification.

“Restaurant owners and the people who work in restaurants should undoubtedly receive support from the government, which means the rest of us,” he said. “If we’re all in this together, that means we need to support people who lose their jobs.”

But compensation means that Covid-zero may ultimately become a debate as much about money as about public health.

A native of Windsor, Ontario, Ian Austen was educated in Toronto, lives in Ottawa and has reported about Canada for The New York Times for the past 16 years. Follow him on Twitter at @ianrausten.

How are we doing?

We’re eager to have your thoughts about this newsletter and events in Canada in general. Please send them to nytcanada@nytimes.com.

Forward it to your friends, and let them know they can sign up here.