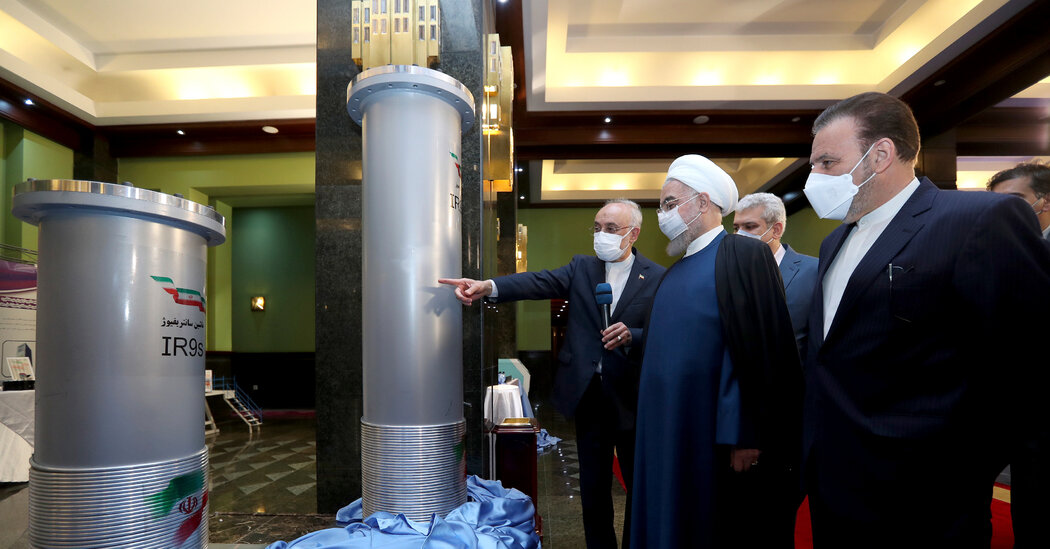 Iranâ€™s top leader said Wednesday that his country would keep negotiating with world powers over how to salvage the 2015 nuclear deal, quashing speculation that Iranâ€™s delegation would boycott or quit participating in protest of the apparent Israeli sabotage of a major uranium enrichment site.

The declaration by the top leader, Ayatollah Ali Khamenei, who has the last word on security matters in the country of 80 million, came three days after an explosive blast at the Natanz enrichment site plunged the heavily guarded facility into a blackout and disabled or destroyed hundreds of underground centrifuges used to process uranium into fuel.

Suspicion for the destruction immediately fell on Israel, which has sabotaged the Natanz site before. Israel neither confirmed nor denied the accusation but intelligence officials said it was a clandestine Israeli operation.

Outraged and embarrassed over such a security lapse, Iran vowed on Tuesday to triple its uranium enrichment purity â€” the most brazen departure yet from its commitments under the nuclear deal.

But Mr. Khameneiâ€™s remarks on Wednesday showed that he does not want to abandon negotiations to save the deal, which has promised Iran relief from onerous economic sanctions imposed by the United States if Iranian nuclear activities are limited.

â€œOfficials have determined that we negotiate to achieve our policies,â€ Mr. Khamenei said during a speech reported by Iranian media to mark the first day of the Ramadan holiday.

â€œWe have no issue with this on the condition that they are careful for negotiations not to wear out and the parties donâ€™t drag out the negotiations because it wonâ€™t benefit the country,â€ Mr. Khamenei said.

President Hassan Rouhani of Iran, who had been ambiguous about whether Iran would walk away from the negotiations, told a televised Cabinet meeting that â€œthe Supreme Leader has clearly defined the framework of our negotiations and we will continue our work within that framework.â€

The European Union, which is overseeing the diplomatic discussions in Vienna, also said they would resume, at 12:30 p.m. local time on Thursday.

The discussions, which began early this month and recessed last Friday, are intended to map out a plan for the return of both Iran and the United States to compliance with the deal.

It has teetered on collapse since President Donald J. Trump abruptly withdrew the United States from it three years ago, restored economic sanctions and imposed new punitive measures as part of a â€œmaximum pressureâ€ strategy aimed at forcing Iran to agree to more restrictive terms.

Israel, which regards Iran as an existential threat, supported Mr. Trumpâ€™s decision and has expressed anger at the Biden administrationâ€™s intent to revive the agreement, arguing that it is weak and would not prevent Iranâ€™s leaders from militarizing their nuclear capabilities. Iran has repeatedly said its nuclear energy program is peaceful.

But Iran responded to the Natanz blackout with a reported attack on an Israeli ship, which was said to have caused only minor damage and no fatalities, and then announced its plan to enrich uranium to 60 percent purity, up from 20 percent, moving a big step closer to the 90 percent level that could be used to fuel a nuclear weapon.

Iran began reneging on pledges to limit its enriched uranium stockpile under the 2015 nuclear deal after the Trump administration renounced American participation.

Iranian officials have also said the country plans to replace centrifuges at Natanz with more modern ones banned under the original nuclear deal. Kazem Gharibabadi, Iranâ€™s ambassador to the International Atomic Energy Agency, the Vienna-based nuclear-monitoring arm of the United Nations,said on Twitter that process could begin soon.

An Iranian parliamentary delegation visited Natanz on Wednesday, and one lawmaker said the wreckage was less extensive than from arson sabotage there last July. Speaking on the Clubhouse chat site, the lawmaker, Vahid Jalalzadeh, said some underground tunnels had been damaged but part of the facility had power and that centrifuges were operating. There was no way to corroborate his assessment, which differed from earlier accounts of large-scale ruin.

Mr. Jalalzadeh also said Israel had recruited spies from within Iranâ€™s intelligence apparatus and that the identity and whereabouts of a suspected saboteur had been discovered, but that he could not reveal it. He did not explain why.

Iran has said that all of its departures from compliance with the nuclear agreement could be easily and quickly reversed when the United States rescinds its sanctions.

In recent years, Israel has carried out a series of raids and attacks targeting Iranâ€™s nuclear scientists and its uranium enrichment facilities.

Although American and Israeli governments have collaborated before to counter what they see as Iranâ€™s militaristic nuclear ambitions, Washington denied any role in Sundayâ€™s blackout.

The foreign ministries of Germany, France and Britain issued a joint a statement on Wednesday condemning Iranâ€™s uranium enrichment intentions and said that they â€œreject all escalatory measures by any actor.â€

Iran and the United States have not been negotiating directly in the talks in Vienna. Instead the other participants in the 2015 accord â€” Britain, China, France, Germany and Russia â€” are acting as intermediaries.

The first round of talks that adjourned last week was constructive, according to senior diplomats who were involved. Two working groups were formed to discuss sanctions and uranium enrichment, both tasked with devising how to bring the United States and Iran back into compliance with the 2015 deal, formally known as the Joint Comprehensive Plan of Action.