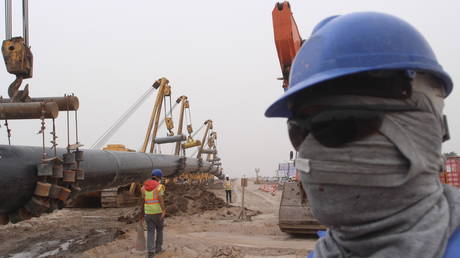 The first phase of the game-changing, and sanctions skirting Goreh-Jask oil pipeline project will come on stream by the end of the current Iranian calendar year.

With sanctions on Iran still in place following the USâ€™s unilateral withdrawal from the Joint Comprehensive Plan of Action (JCPOA) in May 2018, Tehran has been relying on the tried-and-tested sanctions-busting measures to continue to export increasing volumes of crude oil, as exclusively revealed by OilPrice.com in August. These measures include the re-labelling of Iranian oil into Iraqi oil on the border and at the shared oil reservoirs of the two allies, the use of international brokers to hide Iranian oil movements under the guise of other clients, ship-to-ship transfers of Iranian oil in the territorial waters of Malaysia, Indonesia, and China, and the amalgamation of Iranian oil in Iraqâ€™s oil pipeline export routes. Last week, though, it was confirmed by the Petroleum Engineering and Development Company (PEDEC) that the first phase of the game-changing Goreh-Jask oil pipeline project will come on stream by the end of the current Iranian calendar year (ending on 20 March, 2021).

Specifically, according to PEDECâ€™s Goreh-Jask pipeline project director, Ali Jafarzadeh, the testing of the pumping houses and the final terminal will begin within the next two months and end in early February. After that, the first phase of the pipelineâ€™s operations will begin, with the capacity to transfer 350,000 barrels per day (bpd) of light, heavy, and ultra-heavy crude oil through the 1,100 km-long, 46 inch diameter pipeline that runs from the Goreh oil terminal in the north-west Bushehr Province to Mobarak Mount in the western Jask region along the Sea of Oman. This will have involved the construction and deployment of 83 42-inch valves relating to the gate, control and emergency shut-off functions in the pipeline project, six smaller pipelines, five pump houses, three stations for receiving and sending pipeline pigs, 10 power stations, 400 kilometres of transmission lines, three single point moorings, subsea pipelines, and a stilling basin.

The initial focus of the oil-transfer chain across the Goreh-Jask pipeline will be the huge oil fields cluster in the West Karoun region, with the starting point of the transmission route in this first phase being the West Karoun pumping station, the middle point being the Omidieh pumping station, and the end stage being the Bahregan and Jask terminals. After the initial testing of the first phase infrastructure has been done with 350,000 bpd transferred, the figure will be increased to a daily delivery capacity 460,000 bpd of heavy crude oil and 254,000 bpd of light crude oil to export terminals. Phase 2 will involve the transfer more than one million barrels of crude oil to export terminals. These amounts are perfectly realistic, as the West Karoun oil fieldsâ€™ cluster alone comprises North and South Azadegan, North and South Yaran, and Yadavaran â€“ plus some lesser fields â€“ which together contain at least 67 billion barrels of oil in place.

With an average recovery rate currently of only around 4.5 percent (compared to over 50 percent at similar oil fields in Saudi Arabia), the potential to dramatically increase output from these fields is huge, particularly as they are not geologically difficult structures to exploit. Indeed, the West Karoun cluster as a whole has an average lifting cost of crude oil (excluding capital expenditure) rating as the lowest in the world, alongside Saudi Arabiaâ€™s optimal barrels, at just $1-2 per barrel. Raising the output across the West Karoun oil fields cluster by at least 500,000 bpd also remains the key commitment from China in the 25-year deal with Iran revealed by OilPrice.com.

Once in Jask, the oil will be stored in one of the 20 storage tanks each capable of storing 500,000 barrels of oil, in the first phase (totalling 10 million barrels) for later loading on to very large crude carriers (VLCCs) headed from the Gulf of Oman and into the Arabian Sea and then on to the Indian Ocean. The second phase will see an expansion to an overall storage capacity of 30 million barrels, a senior oil and gas industry source who works closely with Iranâ€™s Petroleum Ministry spoken to by OilPrice.com last week. These VLCCs will be accommodated in shipping facilities costing around $200 million in the first phase, although the plans are to expand capacity to allow for further regular shipping of various oil-adjunct and petrochemical products in particular demand in Asia.

In addition, three single-point moorings (SPM), and other infrastructure features for the import and export of crude oil and other products are under construction. According to a recent comment from Hossein Azimi, director of the Pars Oil and Gas Company that oversees developments at Iranâ€™s supergiant non-associated natural gas field, South Pars, a single point mooring (SPM) loading system with a capacity of 7,000 square metres per hour of loading capacity is also being installed in Assaluyeh, southern Iran. This would augment gas condensate loading capacity of the field and will further allow for the handling of liquid cargo, such as petroleum products, for tanker ships.Â

â€œThere will be a few more of these installed in the south, in the Gulf of Oman, in the coming months, as they are very useful in areas where a dedicated facility for loading or unloading liquid cargo is not available,â€ the Iran source told OilPrice.com. These SPMs will operate in a similar manner to those of Iranâ€™s neighbour, Iraq, in that they will be located many kilometres away from the onshore facilities, connected to them by a series of sub-sea pipelines, and able to handle the biggest of VLCCs. According to Azimi this first SPM will be completed by the end of this year.

Also on rt.com
US withdraws its drones as Iran launches massive drills near strategic Strait of Hormuz â€“ state TV

In broader terms, the Goreh-Jask pipeline will allow Iran to freely ship at least 1 million bpd of its own crude oil anywhere in the world (most notably, China, in the short-term) whilst at the same time allowing it to disrupt all other oil supplies that transit through the Strait of Hormuz (aroundÂ  35 percent of the worldâ€™s total). â€œEven before US sanctions were re-introduced, the Kharg terminal [accounting for around 90 percent of all of Iranian oil export loadings, with the remaining loads going through terminals on Lavan and Sirri] was not ideal for use by tankers,â€ the Iran source underlined.

â€œThe extreme narrowness of the Strait of Hormuz means that they have to travel very slowly through it, so pushing up the transit costs, delaying revenue streams, and making easy targets for even simple attacks,â€ he said. â€œConversely, Iran wants to be able to use the threat â€“ or reality â€“ of closing the Strait of Hormuz for political reasons without also completing destroying its own oil exports revenue stream,â€ he added. â€œThis is why, if anything, the Goreh-Jask pipeline is likely to be completed before the official deadline of 20 March [2021],â€ he concluded.

Moreover, the ability to add yet another dimension to Iranâ€™s current playbook of sanctions-busting activity will be in line with the supportive views of senior Iranian politicians for these activities. Back in December 2018 at the Doha Forum, Iranâ€™s Foreign Minister, Mohammad Zarif, stated that: â€œIf there is an art that we have perfected in Iran, [that] we can teach to others for a price, it is the art of evading sanctions.â€ And within just the last couple of weeks, Iranâ€™s Petroleum Minister himself, Bijan Zangeneh, added a little detail to one such tried-and-trusted method: â€œWhat we export is not under Iranâ€™s name. The documents are changed over and over, as well as [the] specifications.â€