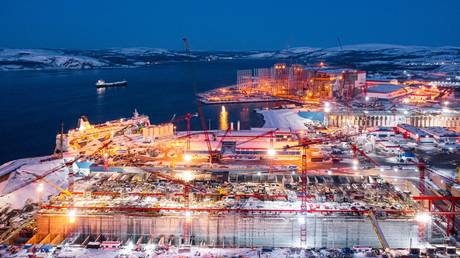 Russiaâ€™s Arctic LNG 2 plant is expected to get 50% more investment this year than in 2020, said Novatekâ€™s deputy chairman of the management board, Mark Gyetvay.

â€œWe spent about $4 billion in 2020 and estimate that capital expenditure requirements this year will be around $6 billion, as construction intensifies to meet planned launch dates,â€ the top manager said during a conference call, as quoted by TASS.

Gyetvay confirmed that the liquified natural gas (LNG) plant was almost 40% complete as of the end of March. The company maintains its plans to launch the first of three proposed production lines in 2023, he said.

Also on rt.com
All of liquified natural gas from Russiaâ€™s Arctic for next 20 years sold in advance â€“ Novatek

The participants have approved $11 billion worth of external financing for the project, according to Novatek. A third of the amount will be provided by Chinese banks, another third by banks in Europe and Japan and the rest by Russian banks.Â On Wednesday VEB.RF, together with a consortium of Russian banks, announced a 15-year loan amounting to â‚¬3.11 billion ($3.7 billion).

The Arctic LNG 2 project on the Gydan Peninsula will involve constructing three LNG liquefaction trains of 6.6 million tons per annum each, and a cumulative gas condensate production capacity of 1.6 million tons per annum. The total LNG capacity of the three trains will be 19.8 million tons.Â Novatek said this week it has inked 20-year agreements with the shareholders of its Arctic LNG 2 project on the sale and purchase of the entire volume of liquified natural gas.