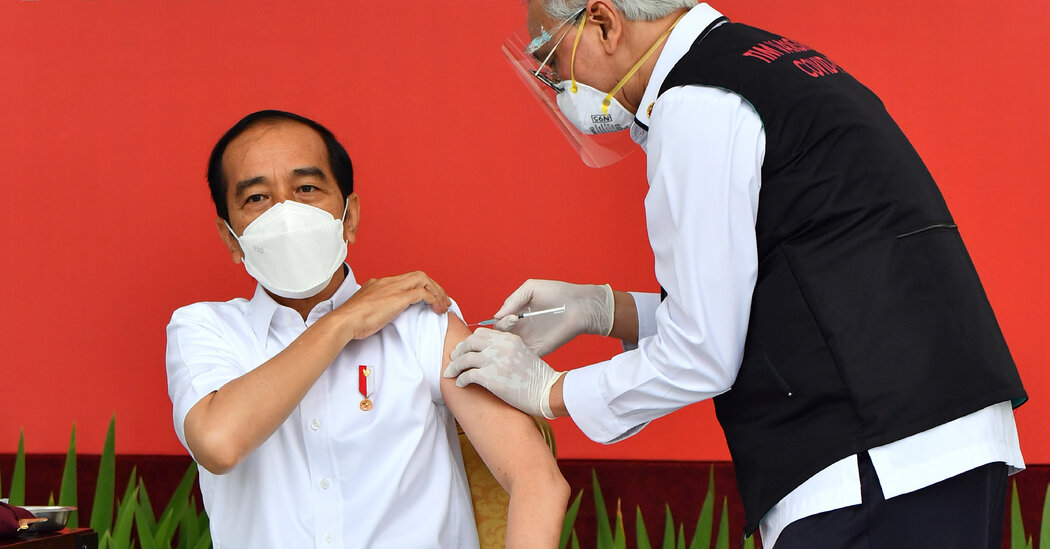 Indonesiaâ€™s president, Joko Widodo, received an injection of a Chinese-made vaccine on live television on Wednesday as health officials prepared for a nationwide rollout.

Human trials in Indonesia have found that the vaccine, CoronaVac, was safe and 65.3 percent effective. But scientists in Brazil said on Tuesday that it had an efficacy rate there of just over 50 percent â€” far lower than the 78 percent efficacy rate announced last week.

Mr. Joko was the first in Indonesia to receive the inoculation, health officials said, because he wanted to assure the public that it was safe, effective and halal, meaning that it is approved under Islamic law.

Behind him as he received his injection was a red sign with white lettering proclaiming the vaccine to be â€œsafe and halal.â€

â€œCovid vaccination is important for us to break the chain of transmission of this coronavirus and provide health protection for all of us, the people of Indonesia, and help accelerate the process of economic recovery,â€ Mr. Joko said after getting his shot.

Indonesia, which authorized emergency use of the Sinovac vaccine on Monday, had previously ordered 125.5 million doses from the company and smaller amounts from several others. Indonesia, the worldâ€™s fourth-largest country with 270 million people, hopes to achieve herd immunity by vaccinating two-thirds of the population within 15 months.

But there are still questions around the Sinovac vaccine, which China began administering last year before human trials were completed.

The company has yet to release data publicly on the results of its trials. And the vaccineâ€™s efficacy rate, as measured in Brazil and Indonesia, is still far below the 90-plus-percent rates achieved by the Pfizer and Moderna vaccines that have been approved in the United States and other countries.

Dicky Budiman, an Indonesian epidemiologist at Griffith University in Australia, said the relatively low efficacy rate for CoronaVac should prompt Indonesia to look for alternatives. He also questioned the transparency of the various trials and the data being released.

â€œAt least Indonesia has one vaccine as a tool to protect its health care workers and prevent staff shortages,â€ he said. â€œOf course, the government should do its best in getting other vaccines.â€

Indonesia plans to give the vaccine first to medical staff, police officers and soldiers. It also has begun a national promotion campaign to persuade members of the public to get the vaccine, which will be free.

Following Mr. Joko to be vaccinated in front of the cameras were the head of the army, the national police chief and the newly appointed health minister, along with other dignitaries and so-called influencers.