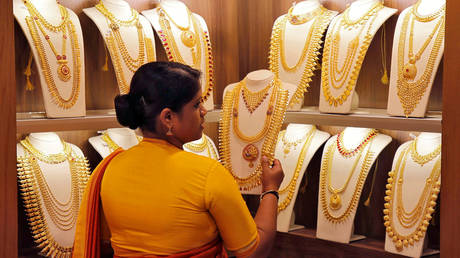 The worldâ€™s second-biggest consumer of gold, India, ramped up imports of the metal by 471% from a year earlier to a record 160 tons in March, Reuters reported, citing a government source.

According to the source, the country purchased a record 321 tons of gold in the first quarter, up from 124 tons a year ago.Â In value terms, imports surged to $8.4 billion from $1.23 billion, the source said.Â

Analysts predict that higher imports by one of the worldâ€™s top bullion consumers could support benchmark gold prices, which have corrected nearly 17% from an all-time high of $2,072 in August 2020.Â

Imports grew after a reduction in taxes, and the correction in prices from record highs drew retail buyers and jewelers alike.Â In February, India slashed import duties on gold to 10.75% from 12.5% to boost retail demand and curtail smuggling.Â

Also on rt.com
India considers over $1 billion in cash incentives for every chip maker setting up in country â€“ media

Jewelers started building inventories after seeing robust retail demand, said an unnamed Mumbai-based bullion dealer with a gold importing bank.Â â€œThroughout the month, gold was trading at a premium because of jewelry demand,â€ he was quoted by the agency as saying, adding that, in April, imports could fall below 100 tons, as jewelers were raising concerns that the government could impose a lockdown to stop the rise in Covid-19 infections.