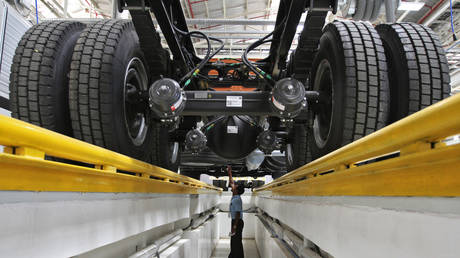 Asia’s third-largest economy saw a second consecutive month of record factory activity performance in October, a private survey has showed, with output expanding at the highest rate in 13 years.

The IHS Markit India Manufacturing Purchasing Managersâ€™ Index (PMI) rose to 58.9 last month from 56.8 in September on the back of the ongoing relaxation of Covid-related restrictions.

The readings show that Indiaâ€™s economy is healing after shrinking by a record 23.9 percent in the April-June quarter.

Output expanded by the greatest amount since late 2007 and new order growth hit its highest level since mid-2008, with export sales rising at a quicker pace. Foreign demand expanded at its fastest rate since December 2014.

â€œCompanies were convinced that the resurgence in sales will be sustained in coming months, as indicated by a strong upturn in input buying amid restocking efforts,â€Â said Pollyanna De Lima, economics associate director at IHS Markit.

According to the survey, payroll numbers were lowered due to government guidelines related to the pandemic, while â€œbacklogs of work rose the least in the current six-month period of accumulation.â€

Pressure on supplier capacity subsided, as indicated by the slowest rise in delivery times for seven months. Inflationary pressures remained subdued, meanwhile, as evidenced by a modest increase in input costs and only a marginal rise in selling prices.

Hopes of an end to Covid-19 cases and the reopening of other sectors in the economy underpinned positive sentiment towards the year-ahead outlook for production, said the report. The level of business confidence was at a 50-month high, it added.