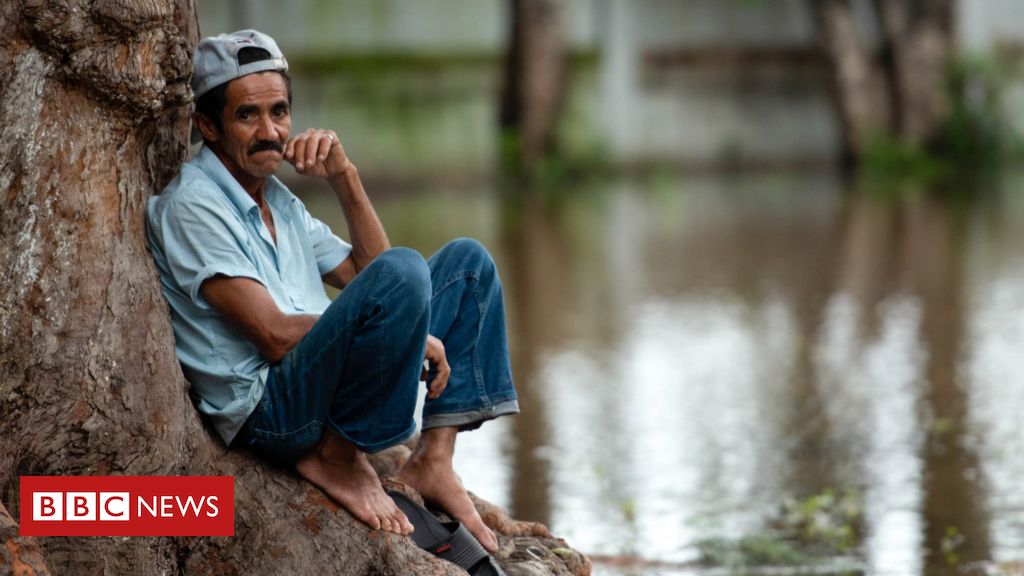 Honduras is one of the countries in Central America to be hit not by one but two hurricanes this month.

Eta arrived in Nicaragua on 3 November as a category four hurricane and ripped through Honduras and Guatemala on its path north.

More than 200 people died across the region, 94 of them in Honduras, according to official figures.

Photojournalist Encarni Pindado travelled to Honduras’ second city and its industrial hub, San Pedro Sula, to survey the damage and speak to some of the three million Hondurans affected by the storms.

Susan Jesenia Aguilar is eight months pregnant. The twenty-three-year-old, her partner and their baby had to flee their home due to the flooding caused by Hurricane Eta. She has epilepsy and has not been able to get hold of the medication she needs since the floods.

The family have been living in a makeshift tent on the pavement by the side of a highway in San Pedro Sula for more than two weeks. She says both she and her baby have developed a cold with a cough, temperature and headaches.

Juan Argueta, 46, lives in Bajos de Choloma, north of San Pedro Sula. When the authorities warned residents to leave the area ahead of Hurricane Iota, Mr Argueta told his family to go to a shelter. But he, like many of his neighbours, stayed behind to look after the family’s belongings and their animals.

When the waters rose quickly, he had to abandon his home for his own safety. Wading through strong currents in the floodwaters, he was eventually rescued by the Honduran Red Cross.

The Red Cross, the army, the fire service and international rescue organisations have all been helping bring people to safety.

Seventy-year-old Roberto Mallorca and his wife Oneida Pérez, 62, lost everything when Hurricane Iota hit: the sheep and chicken that they keep and all their belongings.

Mr Mallorca had a stroke some months back. His disability meant that and he and his family were not able to leave their home for one of the shelters before Iota hit.

When the waters rose, he, his wife, their daughter and two grandchildren scrambled to higher ground where they were trapped for almost 24 hours until locals aided by the Red Cross came to their rescue.

Before the hurricanes hit, Digno Osorto worked transporting sand to construction sites on his horse-drawn cart. On average he earned $13.35 (£10) a week, which he says was not enough to feed his family. His horse-drawn cart turned out to be a lifesaver when the floodwaters rose.

He packed his entire family on the cart and got them to safety. But all of his belongings were lost in the floods.

For many in Honduras, the impact caused by the storms will push them from poverty into extreme poverty.

Official figures suggest more than 150,000 people have been left homeless due to the damage caused by the two storms. Entire families are camping out wherever they can, even if it means sleeping rough by the side of a motorway.

Many are developing health problems ranging from simple colds to skin rashes and gastrointestinal problems. Mosquito-borne dengue and Covid are also on the rise.

According to the health ministry in Cortés region, some people are refusing to be tested for Covid for fear of being stigmatised if they test positive and being pushed out of the shelters where they have sought refuge.

More than 15,000 people sought refuge in shelters in the city of San Pedro Sula alone. This school here (below) houses more than 475 people. It receives donations of food, bedding, clothes and medicines, but with a quarter of the city affected, there is not enough to go around.

The combination of the post-hurricane clean-up, reconstruction and the continuing health emergency due to Covid-19 far exceeds the capacity and the budget of the government.

Porfirio Castellanos, 63, is one of the hundreds of people who sought refuge in the school in the Calpules neighbourhood of San Pedro Sula.

He and his family, like so many others, have lost everything to the floods. He says that he feels people like him were left abandoned. “During Hurricane Mitch (in 1998), the authorities helped people salvage some of their possessions by putting them on to lorries and transporting them to shelters before the city got flooded.” He says that no such help was on hand during Hurricane Eta.

El Valle de Sula is the economic powerhouse of Honduras but after having been flooded twice in the space of two weeks, the government has yet to tally up the economic loss.

Countrywide, almost 300 roads were damaged, 48 bridges destroyed and 32 others were damaged by the river flood, according to Honduras’ civil protection officials.

Gloria, 70, has been sleeping rough on the central reservation of a highway for more than two weeks after her home flooded.

She is one of hundreds of elderly people who are alone and without any financial means. Many are also suffering from post-traumatic stress after losing everything to the hurricanes.

Thousands of people are wandering the streets, bedding down at night wherever they can.

Alberto López Ocampos’ family is living in a shelter, but he refused to go there with them because he would have had to leave his animals behind. After the storms, it took him three days to be able to return to his home to fetch them.

He managed to pack 40 ducks, 25 chicken and 11 geese into a boat and bring them to safety. He is now living with them under a motorway bridge.

He also managed to pull two of his sheep from a roof where they had fled. His other sheep had drowned after they jumped into the water to search for food.

All still pictures by Encarni Pindado and subject to copyright.