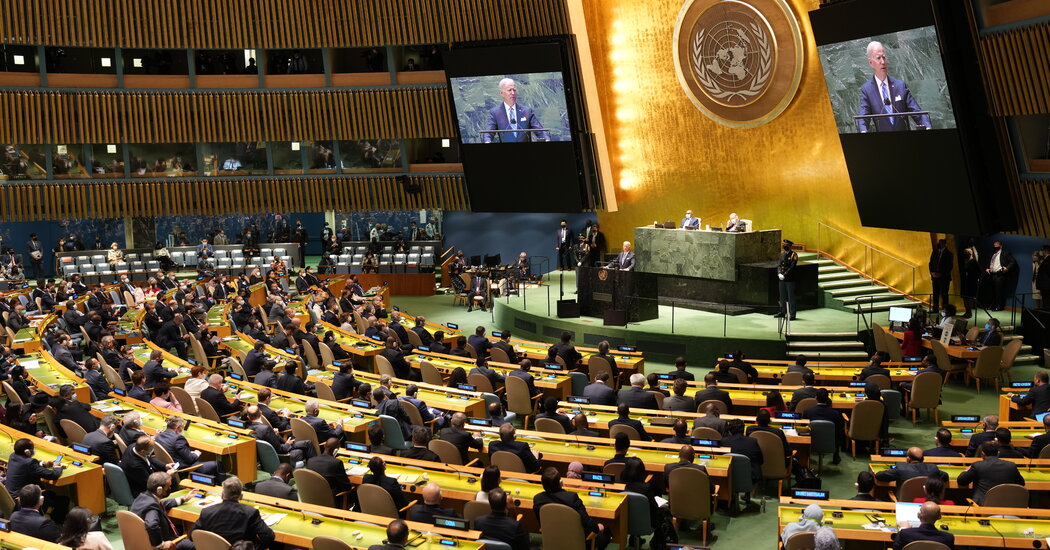 At the United Nationsâ€™ annual gathering of world leaders this week, President Biden and Secretary of State Antony J. Blinken spoke ambitiously about international cooperation and a new diplomatic approach for a post-Trump America.

But nearly all their diplomatic efforts at a pared-down U.N. General Assembly were shadowed â€” and complicated â€” by the legacy of President Donald J. Trump.

Mr. Biden soothed strained relations with France in a call with President Emmanuel Macron on Wednesday. Mr. Blinken met in New York with his French counterpart on Thursday. But French officials openly likened the Biden administration to Mr. Trumpâ€™s in its failure to warn them of a strategic deal with Britain and Australia that they said muscled them out of a submarine contract.

In a fiery address to the global body on Wednesday, President Ebrahim Raisi of Iran suggested that there was little difference between Mr. Biden and his predecessor, invoking their respective foreign policy slogans: â€œThe world doesnâ€™t care about â€˜America Firstâ€™ or â€˜America is Back.â€™â€

And in response to the ambitious targets Mr. Biden offered in his address to reduce global carbon emissions, an editorial in Beijingâ€™s hard-line Global Times newspaper raised an all-too-familiar point for Biden officials: â€œIf the next U.S. administration is again a Republican one, the promises Biden made will be very likely rescinded,â€ the paper wrote â€” a point the Iranians also made about a potential return to the 2015 nuclear deal that Mr. Trump abruptly exited.

In a news conference capping the week of diplomacy, Mr. Blinken offered a positive assessment. He said U.S. officials had met with counterparts from more than 60 countries and emphasized American leadership on climate and the coronavirus.

Asked about several recent criticisms of U.S. foreign policy, such as the Afghanistan withdrawal, stalled nuclear talks with Iran and diplomatic offense in Paris, the secretary of state said he had not heard such complaints directly in New York this week.

â€œWhat Iâ€™ve been hearing the last couple of days in response to the presidentâ€™s speech, the direction that heâ€™s taking us in, was extremely positive and extremely supportive of the United States,â€ Mr. Blinken said.

He spoke before departing a weeklong diplomatic confab that had cautiously returned in-person after the coronavirus pandemic forced a virtual U.N. event last year.

Many foreign leaders skipped this yearâ€™s gathering, including the presidents of Russia, China and Iran. Their absences precluded the drama of previous sessions around whether the president of the United States might have an impromptu encounter with a foreign rival. Mr. Biden made only a brief appearance, departing a few hours after his address on Tuesday.

In that speech, he depicted an America whose withdrawal from Afghanistan had turned a page on 20 years of war after the Sept. 11, 2001, attacks. Now, he said, the United States was embarking on a new era of cooperative diplomacy to solve global challenges, including climate change, the coronavirus and rising authoritarianism.

The speech was a grand homage to internationalism and a stark contrast to Mr. Trumpâ€™s undiplomatic bluster. But it came amid growing complaints that some of Mr. Bidenâ€™s signature policy moves carried echoes of Mr. Trumpâ€™s approach.

French officials said they were blindsided by the U.S. submarine deal with Australia, a complaint for which Biden officials had no easy answer.

â€œThis brutal, unilateral and unpredictable decision reminds me a lot of what Mr. Trump used to do,â€ Jean-Yves Le Drian, the foreign minister, told a French radio outlet, according to Reuters. â€œI am angry and bitter. This isnâ€™t done between allies.â€

That had eased some by Thursday, after Mr. Bidenâ€™s call with Mr. Macron and Mr. Blinkenâ€™s meeting with Mr. Le Drian. But the French diplomatâ€™s statement suggested that the matter was not quite forgotten. â€œGetting out of the crisis we are experiencing will take time and will require action,â€ he said.

The flare-up with Paris might have been dismissed as an isolated episode but for its echoes of complaints by some NATO allies that Mr. Biden had withdrawn from Afghanistan without fully consulting them or alerting them to Washingtonâ€™s timeline. Mr. Trump was notorious for surprising longtime allies with impulsive or unilateral actions.

Mr. Blinken protested that he visited with NATO officials in the spring to gather their views on Afghanistan, but officials in Germany, Britain and other countries said that their counsel for a slower withdrawal was rejected.

Biden allies say they find the comparisons overblown. But some admit that global concerns about whether Mr. Trump, or someone like him, might succeed Mr. Biden and reverse his efforts are valid.

â€œItâ€™s absurd on its face for allies, partners or anyone to think that there is any continuity between Trump and Biden in terms of how they view allies, negotiate internationally or approach national security,â€ said Loren DeJonge Schulman, who worked at the National Security Counsel and the Pentagon during the Obama administration. â€œItâ€™s a talking point, and itâ€™s a laughable one.â€

But Ms. Schulman added that other nations had valid questions about how, in the shadow of the Trump era, the Biden administration could make sustainable international commitments like a potential nuclear deal with Tehran and build more public support for foreign alliances.

â€œThis canâ€™t be a matter of â€˜trust us,â€™â€ said Ms. DeJonge Schulman, who is an adjunct senior fellow at the Center for a New American Security.

It is not just irritated allies that have embraced the notion of a Biden-Trump commonality; adversaries have found it to be a useful cudgel against Mr. Biden. The Global Times, which often echoes views of the Chinese Communist Party, has said that Mr. Bidenâ€™s China policies are â€œvirtually identicalâ€ to those of Mr. Trump.

They include Mr. Bidenâ€™s continuation of Trump-era trade tariffs, which Democrats roundly denounced before Mr. Biden took office but his officials quickly came to see as a source of leverage in their dealings with China.

Similarly, Iranian officials complain bitterly that Mr. Biden has not lifted any of the numerous economic sanctions that Mr. Trump imposed after he withdrew from the nuclear deal. Early in Mr. Bidenâ€™s presidency, some European allies urged the administration to lift some of those restrictions as a way to jump-start nuclear talks, but Biden officials declined to do so.

Last month, Iranâ€™s supreme leader, Ayatollah Ali Khamenei, charged that â€œAmericaâ€™s current administration is no different from the previous one, because what it demands from Iran on the nuclear issue is different in words but the same thing that Trump demanded,â€ Mr. Khameneiâ€™s official website quoted him as saying.

Now, after a monthslong pause in negotiations and the election of a new, hard-line government in Tehran, Biden officials are warning Iran that time is running out for a mutual return to the nuclear agreement.

Mr. Trump was criticized by countless foreign policy veterans of both parties. But critiques of the Biden teamâ€™s management are also growing, particularly after the U.S. militaryâ€™s erroneous drone strike in Kabul last month killed 10 civilians, including seven children and an aid worker.

Some Biden officials, without admitting much fault, say the work of diplomacy has been particularly difficult given that scores of experienced Foreign Service officers retired during the Trump administration. Senator Ted Cruz, Republican of Texas, has also blocked dozens of Biden nominees to senior State Department positions and ambassadorships.

Mr. Biden is also encountering the Trump comparison in other settings, including on immigration.

â€œThe question thatâ€™s being asked now is: How are you actually different than Trump?â€ Marisa Franco, the executive director of Mijente, a Latino civil rights organization, told The Times this week.