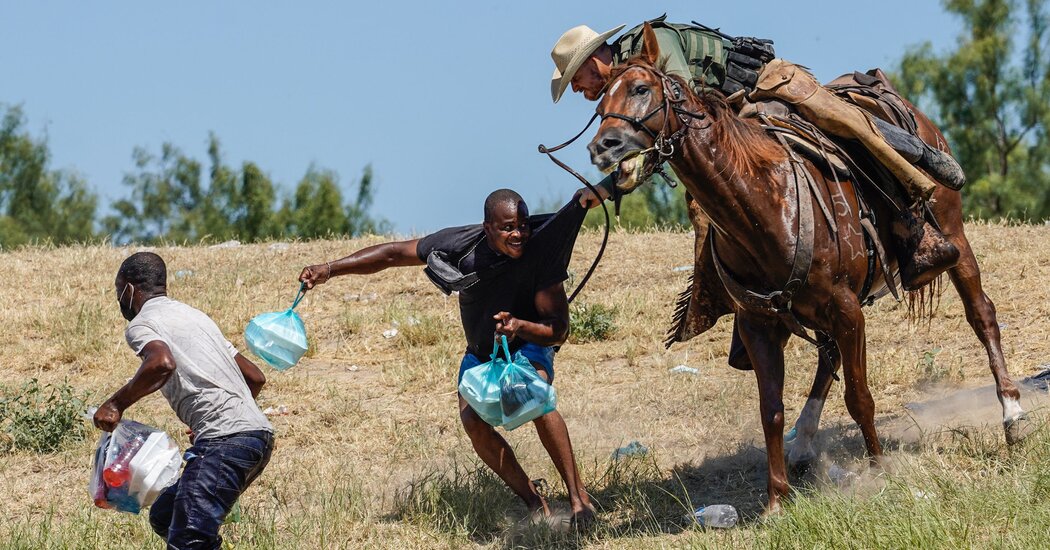 WASHINGTON â€” Images of Border Patrol agents on horses, pushing back Haitian migrants crossing the Rio Grande to try to reach U.S. soil, have prompted outrage among Democrats and called into question President Bidenâ€™s decision to swiftly deport thousands who had been arriving en masse at a small Texas border town.

Vice President Kamala Harris on Tuesday called the treatment â€œhorribleâ€ and said she planned to discuss the issue with Alejandro N. Mayorkas, the secretary of the Homeland Security Department, which has started an investigation.

Asked if Mr. Biden had seen the images, the White House press secretary, Jen Psaki, said: â€œHe believes that the footage and photos are horrific. They donâ€™t represent who we are as a country. And he was pleased to see the announcement of the investigation.â€

The photographs and video footage of the agentsâ€™ interactions with the migrants, which were widely circulated online, offered a glimpse of the chaos that had been unfolding since last week, when large groups of Haitians started crossing the Rio Grande and illegally entering the United States in Del Rio, Texas. It is the latest example of the Biden administration, in its attempts to assert control over soaring numbers of border crossings, belying the presidentâ€™s pledge to restore an asylum program for vulnerable families fleeing persecution and poverty.

The videos appear to show mounted Border Patrol agents corralling migrants and forcing them back to Mexico. Some of the agents were gripping and waving what appeared to be reins, prompting accusations that they had been using whips against them. One video captured an agent shouting an expletive at a migrant.

The Biden administration has flown more than 1,000 people to Haiti since Sunday and plans to run seven flights a day starting Wednesday, with room for 135 migrants on each plane, according to an official familiar with the plan who spoke on the condition of anonymity to discuss internal strategies. But some top Democrats said that strategy was wrong.

The public health rule that the Trump administration put in place at the beginning of the coronavirus pandemic has been used more than 700,000 times under the Biden administration to quickly expel migrants, many of whom are seeking asylum.

Speaker Nancy Pelosi said that Congress was closely monitoring what she called a â€œheartbreakingâ€ situation.

â€œAll migrants seeking asylum must be treated in accordance with the law and with basic decency,â€ she said in a statement. â€œAny acts of aggression or violence cannot be tolerated and must be investigated.â€

Leaders of civil rights organizations, including the N.A.A.C.P., sent a letter to Mr. Biden on Tuesday condemning the treatment of the Haitians.

â€œWhite (and white-presenting) men on horseback with lariats are seen chasing, yelling and cursing at vulnerable Black asylum seekers who have for weeks and months been fleeing toward what they thought was safety,â€ they wrote. â€œThe actions of these Border Patrol officers are disgraceful and show an indifference to the humanity of Black migrants.â€

The Border Patrol, founded in 1924, when agents were recruited from the Texas Rangers and local sheriffsâ€™ offices, is a sprawling arm of Customs and Border Protection. The agency found itself in the spotlight when President Donald J. Trump used harsh measures to restrict the number of immigrants entering the United States.

It was also at the center of some of Mr. Trumpâ€™s more restrictive immigration policies, including the â€œzero-toleranceâ€ policy that separated thousands of children from their parents, and the practice of rapidly expelling migrants across the border during the pandemic, which Mr. Biden has kept in place.

To make good on his campaign promise of improving the agencyâ€™s accountability, Mr. Biden nominated Chris Magnus, the Tucson police chief, who is known as a reformist, as his Customs and Border Protection commissioner.

But the Democratic-controlled Senate has yet to schedule a date for his confirmation hearing, nine months into Mr. Bidenâ€™s term.

During a news conference in Del Rio on Monday, Chief Raul L. Ortiz of the Border Patrol said the mounted unit was deployed to assist with security and see if any migrants were in distress, as well as to gather intelligence about smuggling organizations.

â€œOperating in riverine environment, on horseback, is a difficult situation,â€ he said, adding that agents used reins to try to control horses so that they did not inadvertently injure migrants. He said the actions of one agent on horseback, who appeared to be spinning his reins like a lasso as he loomed over a group in the water, were most likely related to that challenge.

â€œBut we will certainly look into the matter,â€ Chief Ortiz added, â€œto make sure that we do not have any activity that could be construed as a response to a law enforcement effort that is unacceptable.â€

The Border Patrolâ€™s mounted unit has previously been deployed to areas where it can be hard for agents to see migrants trying to evade them, such as the vast brush of carrizo cane along the Rio Grande, said Gil Kerlikowske, a former commissioner of Customs and Border Protection. Agents have said that migrants can use the wooded areas to easily slip past them.

But the agents on horseback on Monday appeared to be along an open stretch of the Rio Grande, where families with children were also gathered.

â€œTheyâ€™re really good to observe in brush,â€ Mr. Kerlikowske said, referring to the horses, â€œbut out in the open, especially with a lot of people, is probably not the best place for them to be.â€

Despite initially suggesting that his administration would end the public health rule and revert to allowing migrants to go through the usual asylum process, Mr. Biden has turned to deterrence measures, insisting that the border is not open and using repatriation flights to convey that now is not the time for migrants to try to come to the United States. Border crossings in recent months have reached their highest level in decades.

Even so, there has been inconsistency at various points along the border about who will be prevented from entering the United States under the public health rule. Some say that has led to confusion among migrants â€œabout what the situation is on the border and how they can best seek protection,â€ said Robyn Barnard, the senior advocacy counsel for refugee protection at Human Rights First.

Immigration advocates have also suggested that the administration is ignoring its own assessment of living conditions in Haiti, which it deemed so extreme that it extended authorization in late July for any Haitian who was in the country to live temporarily in the United States.

â€œIt is reprehensible that Haitian families seeking safety amidst political violence and a devastating earthquake at home are met with anti-Black violence and no real opportunity to seek protection,â€ said Katharina Obser, a director at the Womenâ€™s Refugee Commission.

Many of the migrants who recently arrived in Del Rio have not lived in Haiti for years; instead they have been residing in South America after fleeing the catastrophic earthquake in Haiti in 2010. This has made the swift deportations even harder for people who are repatriated to a country they know little about anymore.

In reality, not all the migrants arriving at the border in Del Rio are being deported. Hundreds of Haitian families have said they fear returning home, and they have been allowed into the United States to seek asylum.

During a Senate hearing on Monday, Republicans pressed Mr. Mayorkas about the latest border crisis.

â€œThis is a humanitarian crisis in Del Rio â€” you can spin it whichever way that you want. But youâ€™re quite right, we should not minimize the humanitarian conditions for which, frankly, youâ€™re responsible,â€ Senator Josh Hawley, Republican of Missouri, said after Mr. Mayorkas described the conditions he saw in Del Rio a day earlier as a â€œhuman tragedy.â€

â€œYou and your administration are responsible,â€ Mr. Hawley added. â€œTens of thousands of people living in conditions that are startling, startling, brought here because of your policies.â€

His comments came after he grilled Mr. Mayorkas about the Biden administrationâ€™s plan to address the increase in illegal immigration.

In Del Rio on Tuesday, Gov. Greg Abbott of Texas also blamed the administration for the crisis.