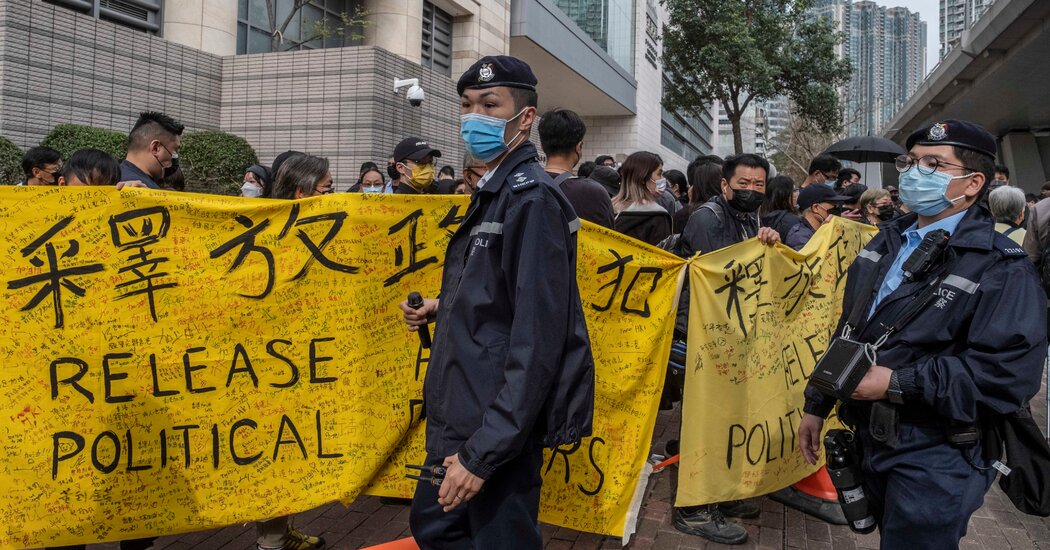 HONG KONG — Holding banners and shouting slogans, hundreds of people assembled outside a court in Hong Kong on Monday in a rare act of defiance after 47 of the city’s most prominent pro-democracy politicians and activists were arrested.

The brief gathering of supporters, who held bright yellow signs reading “Release all political prisoners,” was an echo of the huge pro-democracy demonstrations that regularly filled the streets of Hong Kong in 2019. They lined up around the West Kowloon court complex, where the 47 opposition figures were being arraigned on charges of conspiracy to commit subversion.

Such demonstrations have become an unusual sight in Hong Kong in the past year or so, after the city enacted restrictions to fight the pandemic and Beijing imposed a harsh national security law in June.

The police warned the crowd they could be in violation of the security law or illegal-assembly rules. In the afternoon, the police set up security lines around the court, forcing demonstrators to disperse.

“We know we cannot enter, but still we want to show our support,” said Wong Tin-yan, a district council member who waited hours but was unable to attend the hearing. “Hong Kong people are so angry. No other protests can happen, so we come here. The new law forbids everything else.”

The 47 opposition figures had been charged on Sunday by the police, the most forceful use of the national security law so far and a move that could effectively decimate the political opposition in Hong Kong.

The authorities say the group violated the security law by participating in a primary election held by Hong Kong’s pro-democracy camp in July. The group had hoped to win a majority of seats in the territory’s legislative council, then block legislation and force the city’s chief executive to step down.

While such moves might seem commonplace in democracies, prosecutors in Hong Kong have said the strategy violated the security law’s ban on interference with government functions.

The latest wave of prosecutions raises questions about whether the courts in Hong Kong will retain their independence. Beijing has increased pressure on the judiciary, stirring fears that judges will be increasingly inclined to convict opposition leaders.

Last week, Xia Baolong, the director of China’s Hong Kong and Macau Affairs Office, demanded checks to ensure that members of the judiciary in Hong Kong were “true patriots.”

Mr. Xia singled out for criticism three pro-democracy activists who have been charged with breaking the security law. Joshua Wong, a protest leader, Jimmy Lai, a newspaper publisher, and Benny Tai, a law scholar, are “extremely wicked” and “must be severely punished for their illegal actions,” Mr. Xia said in a speech that also signaled plans to revamp elections to bar candidates deemed disloyal to the Communist Party.

The activists accused of subversion are likely to be held for months before their trials begin, because the security law sets a higher standard for bail.

Several defense lawyers told the court they objected to the prosecutors’ request for a three-month delay in proceedings. Having moved quickly to press charges, prosecutors should also ensure a speedy trial, said Paul Harris, one of the defense lawyers.

The police in Hong Kong have arrested more than 10,000 people over the protests that began in June 2019. Of those, more than 2,400 have faced charges. In addition, about 100 have been arrested under the national security law.