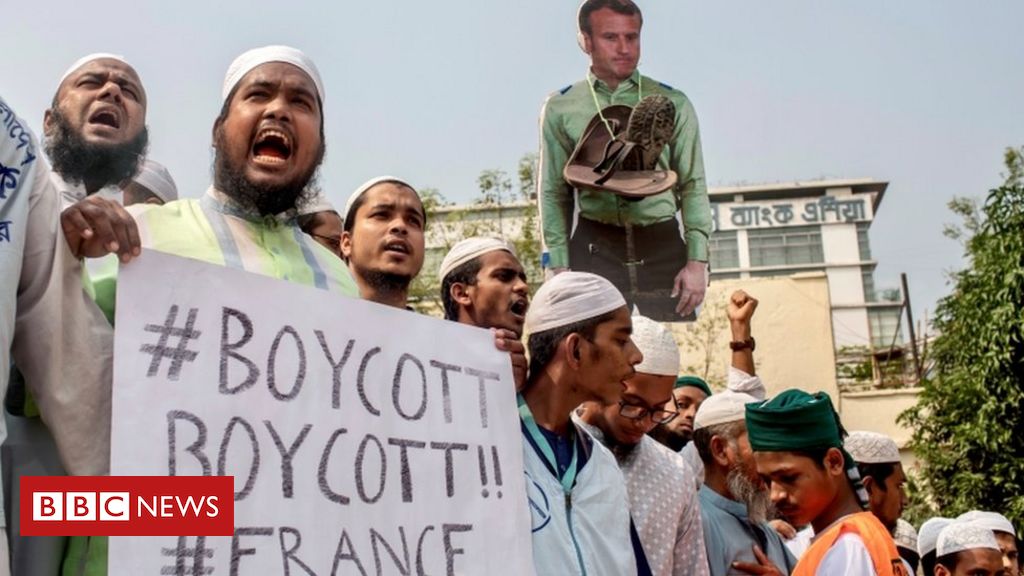 Tens of thousands of people have marched through the Bangladeshi capital, Dhaka, demanding a boycott of French goods amid a row over France’s tougher stance on radical Islam.

They burned an effigy of President Emmanuel Macron, who has defended cartoons of the Prophet Muhammad.

Police blocked the marchers from reaching the French embassy.

Mr Macron has become a target in several Muslim-majority countries after his defence of French secularism.

He spoke out after a teacher was beheaded earlier this month for showing cartoons depicting the Prophet Muhammad. Paying tribute to the teacher, Mr Macron said France “will not give up our cartoons”.

In a televised speech, he said Muslims were now “subjected to a lynch campaign similar to that against Jews in Europe before World War II”. He said “European leaders should tell the French president to stop his hate campaign”.

But governments across Europe have come out in support of Mr Macron and condemned Mr Erdogan’s comments about the French leader. Mr Erdogan said his French counterpart needed “treatment on a mental level” for his stance on radical Islam on Saturday, prompting France to recall its ambassador to Turkey for consultations.

What happened in Dhaka?

Police estimated that about 40,000 people took part in the march, which was organised by Islami Andolan Bangladesh, one of Bangladesh’s largest Islamist parties.

Protesters chanted “Boycott French products” and called for President Macron to be punished.

He urged the Bangladeshi government to expel France’s ambassador.

“France is the enemy of Muslims. Those who represent them are also our enemies,” said another of the group’s leaders, Nesar Uddin.

Police used barbed wire to barricade a road about three miles (5km) from the French embassy, keeping marchers away.

The French foreign ministry has issued a warning to its citizens in Indonesia, Bangladesh, Iraq and Mauritania – countries where protests have taken place – and advised them to exercise caution.

A statement also criticised the calls for a boycott, saying they “distort the positions defended by France in favour of freedom of conscience, freedom of expression, freedom of religion and the refusal of any call to hatred”, as well as distorting Mr Macron’s comments on Islam “for political ends”.

“As a result, the boycott calls are pointless and must end immediately, as well as all the attacks directed against our country, instrumentalised by a radical minority.”

French teacher Samuel Paty was beheaded on 16 October by 18-year-old Abdullakh Anzorov outside Paris, after presenting Prophet Muhammad cartoons to his pupils during a class about freedom of speech.

His murder came as a trial over the 2015 attack on Charlie Hebdo – a satirical magazine that published the cartoons – got under way.

Demonstrations took place throughout France after Mr Paty’s killing. His portrait and Prophet Muhammad cartoons were projected on to town halls in two French cities last week as part of tributes to the teacher.

At a ceremony, Mr Macron praised Mr Paty and vowed to “continue this fight for freedom, this fight to defend the Republic of which you have become the face”.

Mr Paty’s death came two weeks after the French president described Islam as a religion “in crisis” and announced new measures in France to tackle what he called “Islamist separatism”.

Depictions of the Prophet Muhammad are widely regarded as taboo in Islam, and are offensive to many Muslims.

But state secularism – or laïcité – is central to France’s national identity. Curbing freedom of expression to protect the feelings of one particular community undermines unity, the state says.

France has Western Europe’s largest Muslim population, and some accuse the authorities of using secularism to target them.

In a tweet on Monday President Macron said France “will not give in, ever” but also said it respects “all differences in a spirit of peace”.

“We do not accept hate speech and [we] defend reasonable debate. We will always be on the side of human dignity and universal values,” he wrote.

Will calls for a boycott work?

Last year, Bangladesh exported goods worth $1.7 billion to France, making France its fourth biggest export market after the USA, Germany and the UK. And French companies have investments in Bangladesh, from cement to energy, telecommunications and pharmaceuticals.

The Bangladesh government has not reacted to the demands of the Islamist groups. But it is certain that the demand for cutting off diplomatic relations with France or call for boycotting French products would largely be ignored.

And the biggest Islamist group in Bangladesh, Jamaat-e-Islami, is not jumping on the bandwagon. A party leader told the BBC that the statement by the French president was unfortunate, but they don’t support calls for a boycott of French products. He said they expected that the president of a civilised country like France would withdraw his comments on Islam and its prophet.

However, the developments in France are likely to act as a springboard for Islamist groups in Bangladesh to advance their own demands. Already Islami Andolan has asked the government to ensure that anyone insulting Islam and its prophet be punished severely.

What other reaction has there been?

Saudi Arabia has issued an official statement condemning cartoons of the Prophet Muhammad, but did not mention France by name.

A foreign ministry statement said the country “rejects any attempt to draw connections between Islam and terrorism” adding that it also “condemned all acts of terrorism, regardless of the perpetrator”.

Chechen leader Ramzan Kadyrov accused Mr Macron of provoking Muslims, saying the French president was “himself beginning to look like a terrorist”.

“By supporting provocations, he covertly calls on Muslims to commit crimes,” his statement read.

Chechnya is a Muslim-majority autonomous republic in southern Russia.

In a tweet on Sunday, Pakistan’s Prime Minister Imran Khan accused the French president of “attacking Islam”, while French products have been removed from some shops in Kuwait, Jordan and Qatar. There have also been protests in a number of other countries, including Iraq, Libya and Syria.