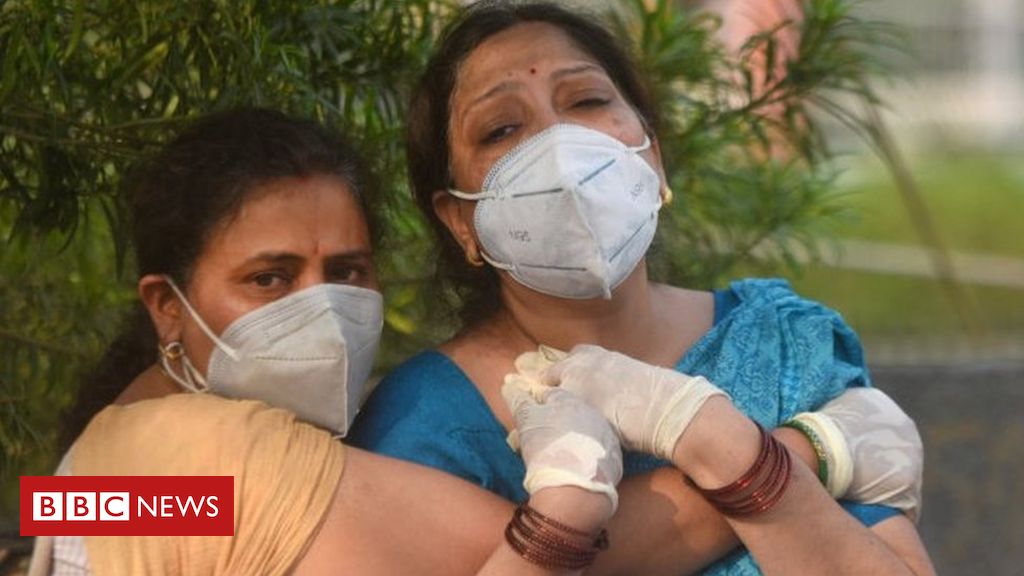 On Monday, a senior official from India’s federal government told journalists that there was no shortage of oxygen in Delhi or anywhere else in the country.

As he spoke, several small hospitals – only a few miles from where he stood in the capital – were sending out desperate messages about them running out of oxygen, putting patients’ lives at risk.

The chief doctor of one of the hospitals – a specialist paediatric facility – told the BBC that “our hearts were in our mouths” because of the risk of children dying. They got supplies just in time, after a local politician intervened.

And yet, the federal government has repeatedly insisted that there was no shortage. “We are only facing problems in its transportation,” Piyush Goyal, a senior official from India’s home ministry, said.

Indeed, it is hospitals which must “ensure judicious use of oxygen as per the guidelines”, Mr Goyal continued, leaving doctors baffled.

But experts say that the shortage of oxygen is just one of the problems which show the Indian government was “caught sleeping at the wheel”, having failed to do enough to stop or minimise the damage of the second wave.

Warnings have in fact been repeatedly issued, including:

Despite this, on 8 March, the country’s health minister announced that India was in the “endgame of the pandemic“.

So, where did it go so wrong?

In January and February, the national number of daily cases fell to under 20,000 from peaks of around 90,000 in September last year. Prime Minister Narendra Modi declared Covid beaten, and all places of public gathering opened.

And soon, people were not adhering to Covid safety protocols, thanks in part to confused messaging from the top.

While Mr Modi asked people to wear masks and follow social distancing in his public messages, he addressed large unmasked crowds during his election campaigns in five states. A number of his ministers were also seen addressing large public gatherings without wearing masks. The Kumbh Mela, a Hindu festival – which attracts millions – was also allowed to go ahead.

“There was complete disconnect between what they practised and what they preached,” says public policy and health systems expert Dr Chandrakant Lahariya.

But there is more to the story: the devastation has also exposed the underfunding and neglect of the public healthcare system in India.

The heart-breaking scenes that have been witnessed outside hospitals – people dying without getting treatment – shows the grim reality of India’s healthcare infrastructure.

As one expert puts it, India’s “public health infrastructure was always broken, the rich and the middle class are just finding out”. Those who could afford it have always relied on private hospitals for treatment, while the poor struggle to get even a doctor’s appointment.

Recent schemes, like health insurance and subsidised medicines for the poor, are not helping because very little has been done in decades to increase the number of medical staff or hospitals.

India’s healthcare spending, including both private and public, has been around 3.6% of GDP for the past six years, the lowest percentage in the five Brics countries: Brazil spent the most at 9.2%, followed by South Africa at 8.1%, Russia at 5.3% and China at 5% in 2018.

Several “empowered committees” were last year looking at the preparations needed to tackle the next coronavirus wave, so experts are baffled by the shortages of oxygen, beds and drugs.

“When the first wave was tapering, that’s when they should have prepared for a second wave and assumed the worst. They should have taken an inventory of oxygen and [the drug] remdesivir and then ramped up manufacturing capacity,” Mahesh Zagade, former health secretary of Maharashtra state, told the BBC.

Officials say India produces enough oxygen to meet the spike in demand but transportation was the problem – although this is questioned by experts.

The government is now running special trains carrying oxygen from one state to another and stopping use of oxygen in industries – but only after many patients died because of a lack of oxygen.

“The outcome has been that desperate family members are spending thousands of rupees to secure an oxygen cylinder on the black market and then stand for hours in a queue to get it filled,” points out Dr Lahariya.

An executive from a pharmaceutical company which manufactures remdesivir said “demand had dried up” in January and February. “If the government had placed an order, we would have stockpiled and there wouldn’t have been any shortage. We have ramped up production but demand has grown significantly,” he said.

In contrast, the southern state of Kerala planned for the surge in advance. Dr A Fathahudeen, who is part of the state’s Covid taskforce, says there was no shortage of oxygen in the state as necessary steps were taken in October last year.

“We also procured sufficient stock of remdesivir and tocilizumab and other drugs well in advance. We also have a surge plan in place to tackle any exponential rise in the numbers in the coming weeks,” he says.

Mr Zagade says other states should have also taken similar steps “to avoid the suffering”.

“Learning means someone else has done it and you can do it now, but that means it will take time,” the former health secretary for Maharashtra said.

But time is running out as the second wave is now spreading to villages where healthcare systems are not equipped to deal with the surge.

Genome sequencing of the virus is an important step in identifying new variants that could be more infectious and deadly. The Indian SARS-CoV-2 Genomic Consortia (INSACOG) was set up last year and it brought together 10 labs in the country.

India is sequencing just over 1% of all samples at the moment. “In comparison, the UK was sequencing at 5-6% at the peak of the pandemic. But you can’t build such capacity overnight,” he said.

“Any public health specialist will tell you there is no practical way to strengthen an already broken public healthcare system in a matter of months,” one woman, whose family runs a large private hospital in Delhi, told the BBC.

“The best and most effective alternative to battle Covid was to vaccinate the population as quickly as possible so the majority wouldn’t need hospital care and hence not overburden the healthcare system.”

India initially wanted 300 million people vaccinated by July, “but it seems the government did not do enough planning to secure vaccine supply to run the programme”, Dr Lahariya says.

“On top of it, it has opened the vaccination for all adults without securing vaccine supplies.”

So far, only about 26 million people have been fully vaccinated out of a population of 1.4 billion, and about 124 million have received a single dose. India has millions more doses on order, but still far short of what it actually needs.

The government has also cancelled exports, reneging on international commitments.

The government has enlisted other firms like Biological E and the state-run Haffkine Institute to produce vaccines. It has also given credit support of $609m to the Serum Institute of India, which produces the Oxford-AstraZeneca jab which is being made in India as Covishield, to ramp up production.

But that funding should have come earlier, Dr Lahariya says, saving precious lives. “It will take months before we have enough vaccines to speed up the programme. In the meantime, millions will continue to be at risk of getting Covid,” he adds.

Experts say it is ironic that India is known as the world’s pharmacy and it is now facing shortages of vaccines and drugs.

All of this, Dr Lahariya says, should serve as wake-up call for for both federal and state governments, which should invest drastically more in the healthcare sector because “this definitely is not the last pandemic we will have to fight against”.

“The future pandemic may come earlier than any model can predict,” he says.