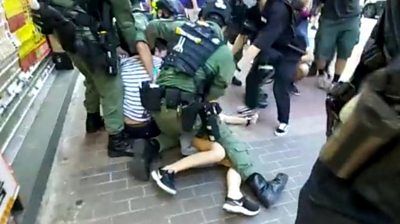 Hong Kong police have come under fire after footage of officers tackling a 12-year-old girl to the ground near a pro-democracy protest went viral.

Police said the girl took part in an illegal gathering and officers used “minimum force” after she “ran away in a suspicious manner”.

The girl’s family said she was simply out to buy school supplies and became scared when confronted by police.