Home World USA Her Antenna Is Tuned to the Quietest Voices 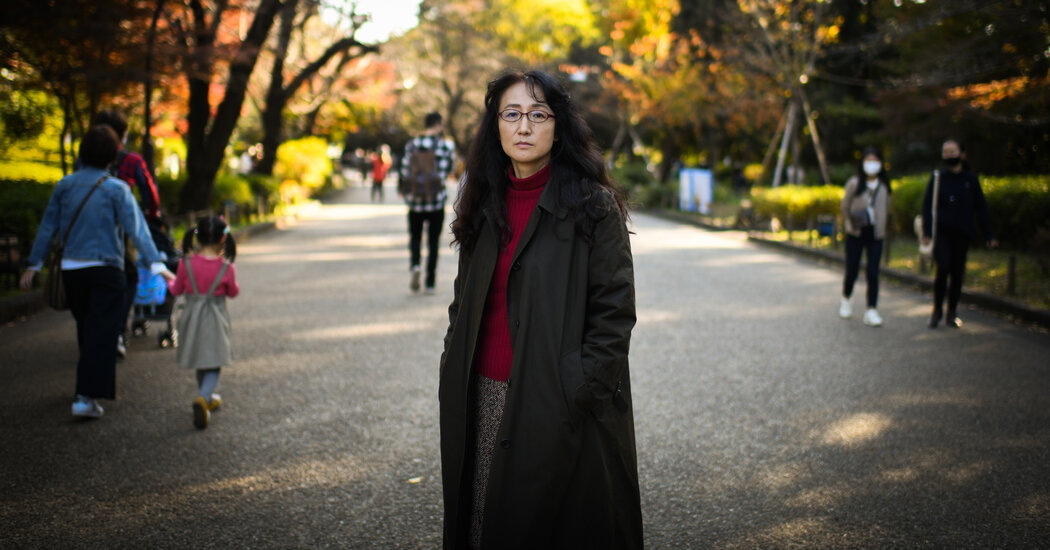 TOKYO — Walking on an autumn Saturday through Ueno Park, one of this city’s most popular attractions, the novelist Yu Miri was stunned by how beautified the grounds seemed since her last visit several years earlier.

Pointing to a grove of trees where people were picnicking at a social distance, she recalled how the homeless used to congregate on the lawn in cardboard shelters covered in blue tarps.

That was the setting she recreated in her novel “Tokyo Ueno Station,” which won the National Book Award for translated literature last week. Its narrator is a dead construction worker whose spirit loiters around these camps, where he and others who had fallen down the socioeconomic ladder spent their final living years.

“Japan is so clean and there is also this clean image,” Yu said. “But there is also this feeling of not letting people see dirty or ‘unacceptable’ things.” As a society, she added, Japan “pushes out the things that they don’t want others to see into hiding.”

In “Tokyo Ueno Station,” which Riverhead published in the United States in June, she uncovers that hidden world. Drawing on interviews with people she met in the park, she captures details like the man who sleeps with a “large translucent bag of scavenged aluminum cans tucked between his legs,” or the cardboard shanty where the garments hanging on a “bamboo broomstick protruding from the hut were women’s underwear.”

In the delicate ecosystem of the homeless, the narrator, Kazu, explains how convenience stores leave expired food near dumpsters so that “if we went before the trash was collected, we could claim anything we wanted.” A friend uses his meager money to buy tuna and kibble for a cat he has adopted, even before he buys food for himself.

Bringing these often-veiled people to life is “the reason I am a writer,” Yu, 52, said. “I’m kind of like a parabola antenna, so that I can magnify the small voices of people who aren’t often heard.”

According to Japanese government data, the number of homeless people around the country has dropped from more than 25,000 in 2003 to about 4,500 now. But some private researchers suggest the current numbers are higher. Local media reported that the Tokyo government pushed many of them out of Ueno Park and other tourist attractions to prepare for the 2020 Tokyo Olympics, now postponed until 2021, though officials deny they were displaced.

Yu based details in “Tokyo Ueno Station,” first published in Japan in 2014, on conversations with homeless people she met in the park starting more than a decade ago. Kazu, a migrant worker from Fukushima, where the 2011 earthquake and tsunami triggered a nuclear meltdown and subsequent mass evacuations, sprang from a series of 600 conversations that Yu conducted for a local radio program after the disaster.

Laura Perciasepe, a senior editor at Riverhead, said she appreciated how Yu wove together social criticism with a harrowing individual portrait. “The book is an indictment of capitalism, and an elegy to those it leaves behind,” Perciasepe wrote in an email. “But the novel is also quite personal and intimate, about a family and this man.”

Yu’s own connection to Fukushima, where she moved in 2015, runs deep. Her mother, a refugee from the Korean War who fled to Japan from South Korea in a small boat, landed in a village in Fukushima that was eventually flooded by a dam that served as a source of hydropower for Tokyo.

Morgan Giles, who translated “Tokyo Ueno Station” into English, said she was initially drawn to the novel because she had been reading other works about the Fukushima disaster. But Yu’s story, she said, “resonated much more globally. So many people are living in regions stripped of their resources and people and forgotten for that sacrifice.”

Yu is the eldest of four children. Her father, also the son of Korean immigrants, worked at a pachinko gambling parlor and was often abusive, she said, spending most of his income betting on horses or playing poker. Her mother supported the family as a hostess at a cabaret club in Yokohama, Japan’s second-largest city. A younger brother was violent — he once took a baseball bat to the windows of the house, drawing the police — and her parents divorced when Yu was a child.

As an ethnic Korean — known in Japan as Zainichi — from a poor family, she was bullied in school. Classmates called her a “germ” and would refuse to eat lunch when it was her turn to serve the food. She recalls that a teacher, apparently offended by her shyness, demanded to know: “Can’t you speak Japanese?”

Literature became a refuge, particularly Edgar Allan Poe, Fyodor Dostoyevsky, William Faulkner and Truman Capote. “Books were the escape room for my soul,” Yu said, and she often used them to conceal her face from classmates.

Because of the discrimination and poverty she experienced, she identifies with the struggles of her fictional characters. “When I was a child, I didn’t belong anywhere,” she said. “So I feel like that’s what I am writing about when I write about homeless people or people on the edge of society.”

Deborah Smith, the founder of Tilted Axis, a nonprofit publisher that translates Asian writers into English and originally published “Tokyo Ueno Station” in Britain, said Yu writes about those “who are not part of any kind of officially projected image” of Japan.

“She writes about their lives, not only with force and anger and realism, but also with great beauty and quite experimentally,” said Smith, herself a translator of Korean writers.

When Yu was 14, she ran away to Atami, a seaside town south of Tokyo, where she intended to drown herself. When that attempt failed, she started climbing a fence to get to the top of a building from which she planned to jump.

A janitor came to her aid and took her home to his wife, who served her dinner. She has never forgotten the couple’s kindness, or the fresh lychee they served for dessert.

“That was the first time I had ever had that fruit, and it was so delicious and cold,” Yu recalled. The taste, she said, somehow jolted her into giving the couple her father’s phone number, so they could call him to come pick her up.

But her depression persisted, and she tried several more times to kill herself. She left home for good when she was 16, after waking up one night to find her mother hovering over her with a knife, and wound up in a theater group in Tokyo. (She said she and her mother have yet to mend their relationship.)

Yu moved in with one of the directors, who was then 39. They started a romantic relationship, an arrangement that she acknowledges, “under current law, was illegal.” But he encouraged her creative talent, and she started writing plays, one of which won a prize and attracted the attention of editors who urged her to write a novel.

When an excerpt from her autobiographical first novel appeared in a magazine, the woman who was the basis of a central character sued Yu for violation of privacy and defamation, and a court stopped that novel from ever being published in full. Her first published novel, “Full House,” however, won a prize for debut fiction when Yu was 26.

“Since then I have written every day,” she said. “It’s just how I live. Life itself is writing.”

Her only other novel translated into English, “Gold Rush,” depicts a nihilistic society in which a 14-year-old heir to a pachinko parlor resorts to violence. Yu based it in part on a real teenager who had killed several people and on the pachinko world in which she grew up. She is now working on a sequel to “Gold Rush” while Giles translates another of her autobiographical novels, “The End of August.”

In addition to writing, Yu has opened a bookstore in Minami Soma, one of the Fukushima villages that was evacuated after the nuclear disaster, where she now lives. She wanted to offer returning residents and students a safe place to connect with others in the community, although the pandemic currently curtails activity at the shop.

Accepting the National Book Award, she thanked the people of her new home. “I would like to share this joy with the people of Minami Soma, who are on a path of hardship after the earthquake, tsunami and nuclear disaster,” she said by video. “This is for you.”