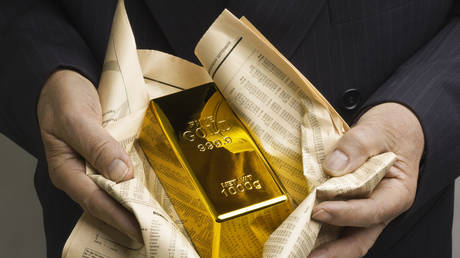 The price of gold this week exceeded $1,800 per ounce, trading data shows. While global investors assess the risks of high inflation, some experts say gold prices could soon double.

The price of December gold futures on the New York Comex stock exchange on Friday jumped 1.69%, to $1812.15 per ounce. Over the week, gold has risen in price by some 2.5%, its fastest weekly growth rate since spring.

The popularity of the precious metal has grown as it is seen as a means of protection against high inflation, a common trend in many countries around the globe despite the assurances of the financial authorities that the phenomenon is temporary.

Kitco analyst Jim Wyckoff, who is quoted by the Wall Street Journal, believes gold prices “are supported by growing fears about inflation and a decline in the dollar index at the end of the trading week.” In recent weeks, the dollar has been weakening against a number of major world currencies, in particular, the euro, the yen and the yuan, while the dollar index has dropped by 0.2%, to 93.58 points.

Also on rt.com
‘The world is going back to a GOLD STANDARD as the US dollar is about to collapse’ – Peter Schiff

According to the former chiefs of Canadian gold mining company Goldcorp Inc., David Garofalo and Rob McEwen, global inflationary pressures are not as transitory as central bankers and consumer price indexes suggest. When investors realize this, it could propel gold prices up to $3,000 an ounce.

“I’m talking about months. The reaction tends to be immediate and violent when it does happen. That’s why I’m quite confident that gold will achieve $3,000 an ounce in months not years,” Garofalo, who now heads Gold Royalty Corp, told Bloomberg. He noted that because gold is a universal asset and has a some 4,000-year history, it is better positioned than, for instance, cryptocurrencies as a hedge against an inflationary environment. McEwen noted that the post-pandemic global monetary and debt expansion combined with supply disruptions will inevitably lead people to traditional methods of protecting their capital, with gold the leading choice.