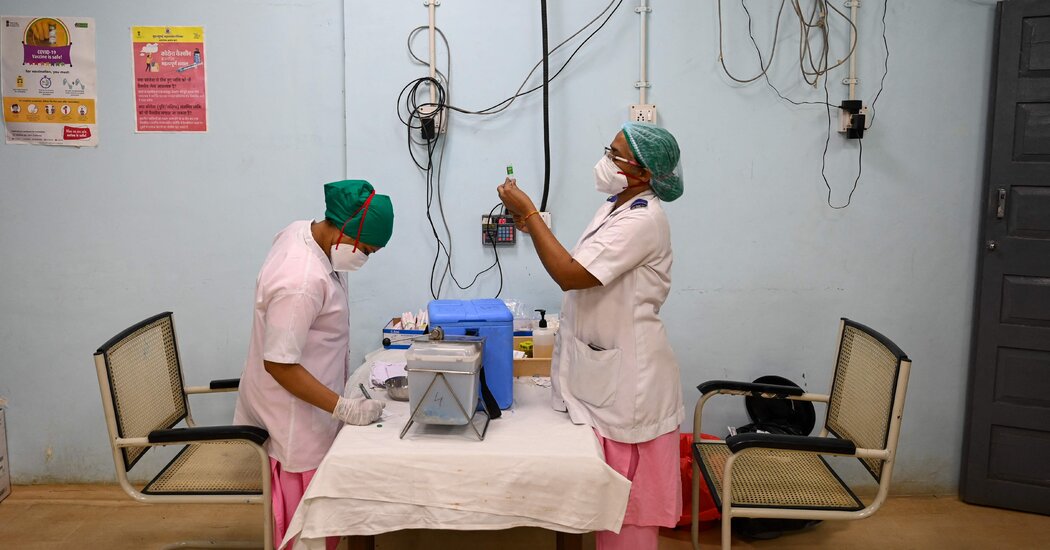 The stark gap in vaccination rates between the world’s rich and poor countries is emerging as a test for how the world responds to that other global challenge: averting the worst effects of climate change.

Of the more than 1.1 billion vaccinations administered globally, the vast majority have gone into the arms of people who live in the wealthiest countries. The United States, where nearly half the population has received at least one dose, sits on millions of surplus doses, while India, with a 9 percent vaccination rate, shatters records in new daily infections. In New York City, you hear cries of relief at the chance to breathe free and unmasked; in New Delhi, cries for oxygen.

The vaccine gap presents an object lesson for climate action because it signals the failure of richer nations to see it in their self-interest to urgently help poorer ones fight a global crisis. That has direct parallels to global warming. Poor countries consistently assert that they need more financial and technological help from wealthier ones if the world as a whole is going to avoid the worst consequences of climate change. So far, the richest countries — which are also the biggest emitters of greenhouse gases — haven’t come up with the money.

More immediately, this year’s vaccine shortages in the nations of the global South could hinder their ability to participate in the United Nations-led climate talks in Glasgow set for November, minimizing their voice in critical policy decisions about how to wean the global economy away from fossil fuels.

“Equity is not on the agenda,” said Gregg Gonsalves, assistant professor of epidemiology at the Yale School of Public Health and a veteran activist for global access to AIDS drugs. “If we can’t do it for the worst pandemic in a century, how are we going to do it for climate change?”

Dr. Gonsalves is among those who favor waiving drug-company patents for Covid-19 vaccines, sharing technology with vaccine manufacturers and ramping up production around the world. Pharmaceutical industry groups and their backers in the White House have opposed freely sharing intellectual property with rival drug makers, and some in the administration have argued that vaccine raw materials are needed for production of vaccines for Americans.

India has pushed to relax Covid-19 vaccine patents and United States export rules on vaccine raw materials to allow Indian companies to ramp up production. In Brazil, several lawmakers have recently sought to suspend patents for Covid-19 vaccines and medicines. The United States has so far blocked efforts at the World Trade Organization to relax patent rules.

Of course, the devastation of the pandemic in countries like Brazil and India can’t be laid at the feet of rich-world patent holders alone.

Brazil’s right-wing populist president, Jair Bolsonaro, scorned public health guidance and insisted that lockdowns and mobility restrictions would be a bigger threat to the country’s weak economy. Brazil now has one of the world’s highest death tolls and its economy is in tatters.

India’s right-wing populist prime minister, Narendra Modi, who earlier this year boasted of conquering the virus, allowed large religious and political gatherings. And instead of securing vaccines for India’s 1.4 billion citizens, India began exporting Indian-made doses to other countries. Today, India has become the worst-hit country in the world, with close to 380,000 new infections daily over the past seven days.

The long running global battle over intellectual property rights to medicines has a parallel to climate action, too, with the Paris climate agreement explicitly calling for the transfer of technology to develop clean energy infrastructure. Developing countries have long said they cannot cope with the effects of climate change if the rich world does not share money and technology, and that problem is only made more acute by the economic collapse brought on by the pandemic and the inequitable access to vaccines.

Not least, the consequences of global warming are unequal, hurting the poorest people in poor countries hardest.

“If this is the way rich countries conducted themselves in a global crisis — where they took care of their own needs first, took care of companies, did not recognize that this as an opportunity to reach out and demonstrate solidarity — then there’s no good track record for how they will conduct themselves in the face of other global crises, such as the climate crisis, where poorer countries will bear the highest burdens,” said Tasneem Essop, a former government official from South Africa who is now executive director of Climate Action Network, an advocacy group.

Money is at the heart of the distrust.

The Biden administration promised to double grants and loans to developing countries to $5.7 billion a year, a target that is widely seen as both insufficient and lagging behind the pledges of other wealthy industrialized nations, notably in Europe. Many low- and middle-income countries are carrying so much debt, they say it leaves them nothing left to retool their economies for the climate era. In addition, the rich world has yet to fulfill its promise to raise $100 billion a year that could be used for green projects, whether solar farms or mangrove restoration.

“In both cases, it’s about a willingness to redistribute resources,” said Rohini Pande, a Yale University economist.

In the case of coronavirus response, it’s about helping vaccine makers around the world manufacture billions of doses in a matter of months. In the case of climate change, huge sums of money are needed to help developing countries retool their energy systems away from dirty sources like coal.

The next few weeks will be critical, as world leaders gather for meetings of the seven richest countries, the Group of 7, in June and then of the finance ministers of the world’s 20 biggest economies, the Group of 20, in July. Those meetings will then be followed by the U.N.-led climate negotiations in Glasgow in November.

Those negotiations, known as the 26th Conference of the Parties to the Paris Agreement, or COP26, to a significant degree could determine whether the world can slow down the rate of warming that is already causing Arctic ice melt, worsening wildfires and other crises. At that meeting, countries big and small are set to present more ambitious plans to keep the average global temperature from rising past 1.5 degrees Celsius compared with preindustrial times.

“We will not have a successful outcome at COP26,” said Christiana Figueres, a former U.N. climate diplomat who helped negotiate the Paris Agreement in 2015, “unless we have financial commitments that are commensurate with the impacts that many developing countries are feeling.”