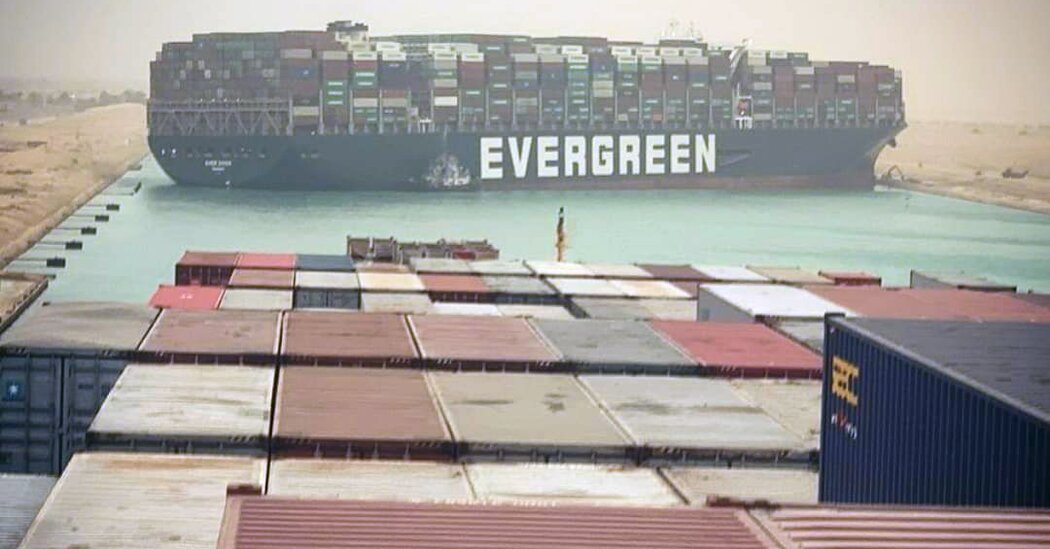 CAIRO â€” As tugboats strained against the weight of the mammoth ship and dredgers worked to clear sand and mud, a salvage company working on the operation warned on Thursday that releasing the container vessel blocking traffic in the Suez Canal in Egypt could take days or even weeks.

Dozens of ships laden with oil and goods destined for ports around the world are stranded in the canal, and with each passing hour, the economic cost of the disruption grows more consequential.

The stuck ship, the Ever Given, has been wedged in the canal since running aground amid the heavy winds of a sandstorm on Tuesday. Its bow is lodged in the canalâ€™s eastern bank and its stern in the western bank.

Eight large tugboats were attempting to push and drag the ship from its unintended berth, the Suez Canal Authority said in a statement on Thursday, but at about 1,300 feet long â€” roughly equivalent to the height of the Empire State Building â€” and weighing around 200,000 metric tons, dislodging the Ever Given is proving challenging.

An attempt to extract the ship at around 8 a.m. on Thursday did not succeed, forcing salvagers to try again later in the day, the shipâ€™s technical manager, Bernhard Schulte Shipmanagement, said in a statement on Thursday. The company said that a specialized suction dredger had arrived to help dig the ship out.

The Japanese company that owns the ship, Shoei Kisen Kaisha, acknowledged in a statement on Thursday that the situation was â€œextremely difficultâ€ and apologized for the disruption caused by the episode. â€œWe will continue to do our utmostâ€ to move the ship, it said.

Peter Berdowski, chief executive of Royal Boskalis Westminster, which has been appointed by Ever Givenâ€™s owner to help move the vessel, told the Dutch current affairs program Nieuwsuur on Wednesday that the operation to free the ship could take â€œdays, even weeks.â€

Mr. Berdowski, whose company has been involved in expanding the Suez Canal, said that Ever Given was stuck on both shallow sides of the V-shaped waterway. Fully loaded with 20,000 containers, the ship â€œis a very heavy beached whale,â€ he said.

The authorities had first tried to float the vessel using tugboats, a model that worked to free the CSCL Indian Ocean, a similarly sized container ship that became stuck in the Elbe River in 2016, near the port of Hamburg, Germany. Salvaging that ship took 12 tugboats and three attempts, and part of the sandbank where the ship ran aground had to be dredged.

Mr. Berdowski said that the Ever Given, operated by a company called Evergreen, was too heavy for tugboats alone, adding that salvagers might need to extract fuel, pump out water from the ballast tanks and remove some of the containers to make the ship lighter and therefore easier to move. And the dredging may require extra equipment, he said.

Everything depends on how deep the massive container ship is stuck. â€œThe more deeply the ship is stuck, the harder it is to lose weight, the more time it will take to free it,â€ Mr. Berdowski said.

The shipâ€™s manager has said in a statement that a preliminary investigation found that the vessel grounded because of strong winds, not because of mechanical or engine failure. The company said that all 25 crew members, who the shipâ€™s owner said were all Indian citizens, were safe and that there were no reports of injuries, pollution or cargo damage.

The global shipping and supply industry â€” already battered by the surge in orders caused by the coronavirus pandemic and recent disruptions at factories in Japan and Texas â€” waited to see whether the disruption from the traffic jam would amount to a couple of daysâ€™ minor inconvenience, or something worse.

The canal, from which Egypt derives much of its revenues and geopolitical significance, handles about 10 percent of all global trade. By connecting the Red Sea to the Mediterranean, the canal offers a shortcut worth about 10 days of sailing time to ships carrying oil and cargo from Asia to Europe and beyond. More than 50 ships pass through it on an average day.

Egypt opened a new lane in one section of the canal in 2015, an $8 billion expansion that the president, Abdel Fattah el-Sisi, heralded as a historic national accomplishment. But the Ever Given is sitting diagonally across another section of the canal, one that has only one lane.

The head of the Suez Canal Authority, Lt. Gen. Osama Rabie, said in a statement on Thursday that the day before, 13 ships had been expected to be able to move through the canal after the Ever Given was tugged out of the way. But the salvage operation was taking longer than hoped, forcing the ships to drop anchor in a waiting area, the authority noted in the statement.