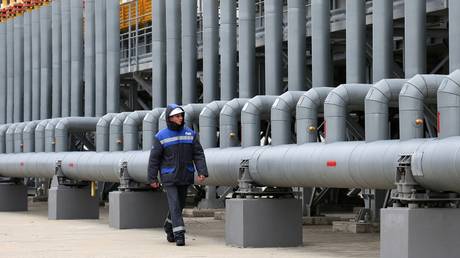 Russia’s state energy giant Gazprom has raised its forecast for gas export prices in 2021 and called for changes to the gas pricing mechanism in Europe to avoid further crises.

According to a report of the investment company Sova Capital following a webinar on the European gas market held by Gazprom, the company raised the outlook for the average gas export price to $295-$330 from the previously expected $269.60 per thousand cubic meters.

At the same time, Gazprom maintains its forecast for gas supplies to Europe at 183 billion cubic meters in 2021.

According to the report, the energy giant expects gas prices in 2022 to be significantly higher than $330 per thousand cubic meters. During the webinar, Gazprom representatives called for changes to the gas pricing mechanism in Europe, stressing that the use of forward prices, such as “one month ahead” and “one day ahead,” creates a variety of problems as prices are very responsive even to a minor imbalance in the market.

The price of gas futures on the European market smashed a historic record on low supply earlier this week, surpassing $1,900 per thousand cubic meters on Wednesday. However, it dropped back to $1,000 after news that Russia could boost the commodity supply via all its existing pipelines and through sales at the St. Petersburg Exchange.

By the end of Friday trading on the TTF hub in the Netherlands, the cost of November futures settled slightly above $1,000 per 1,000 cubic meters, after dropping below this threshold during the trading day, data from the Intercontinental Exchange (ICE) shows.