Home World USA From Minerâ€™s Grandson to Lord Darroch of Kew, With a Touch of... 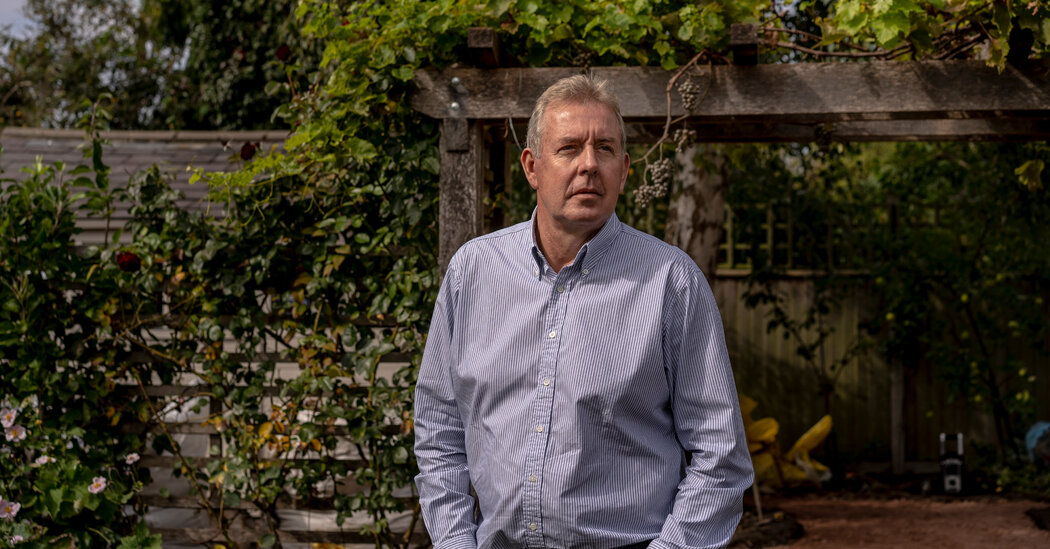 LONDON â€” For Kim Darroch, Britainâ€™s former ambassador to the United States, the latest jaw-dropping revelations about President Trumpâ€™s private comments about the military and the pandemic could easily be a source of vindication or bitterness.

Vindication, because years earlier, Mr. Darroch alerted his colleagues to the unfiltered, erratic nature of the American president in a stream of frank confidential cables from Washington. Bitterness, because the leaking of those memos in 2019 ended his diplomatic career, even though his descriptions were arguably less incriminating than the statements now being attributed to Mr. Trump himself.

â€œLife is full of ironies, isnâ€™t it?â€ Mr. Darroch said with a laugh, looking neither bitter nor vindicated as he sipped a cup of tea this week in the sun-dappled garden behind his home in Londonâ€™s Richmond district.

One of those ironies is that Mr. Darroch, perhaps Britainâ€™s most notorious casualty of the Trump era, has landed on his feet. He is now a baron, Lord Darroch of Kew, granted a peerage by Prime Minister Theresa May as compensation for falling on his sword. And he has just published a memoir, â€œCollateral Damage,â€ which recounts his downfall with sorrow and humor but little of the kiss-and-tell of Trump books on the other side of the Atlantic (his book was vetted by the government).

Regardless, Mr. Darroch, 66, insisted he was not out to settle scores â€” either with Mr. Trump, who called him a â€œvery stupid guyâ€ and said he would not deal with him after the cables were leaked, or with the current prime minister, Boris Johnson, whose refusal to defend him in a televised debate triggered his resignation.

But that doesnâ€™t mean Mr. Darroch has let Mr. Johnson entirely off the hook. He wrote that after the news broke, Mr. Johnson, then the front-runner to succeed Mrs. May, left him multiple phone messages. When Mr. Darroch finally returned the calls, an abashed Mr. Johnson told him he didnâ€™t understand why he had quit. The whole thing would have blown over in a few weeks.

â€œBoris said he was sorry if what he had said had contributed to my decision; absolutely not his intention,â€ Mr. Darroch wrote, in the bland language that diplomats use to characterize bumpy exchanges. â€œWe left it at that. There was a certain tension in the atmosphere, but our parting words were amicable.â€

Mr. Darroch has known Mr. Johnson since the 1990s, when the diplomat was the spokesman for Britainâ€™s foreign secretary. Mr. Johnson was then the enfant terrible of the British press corps in Brussels, filing funny but factually challenged articles for The Daily Telegraph about how bureaucrats there tried to dictate the size of Italian condoms or the shape of bananas, which seeded the anti-European sentiment in Britain that Mr. Johnson later harnessed as leader of the Brexit movement.

â€œI got on well with him,â€ Mr. Darroch said, adding that if he ran into the prime minister today, â€œI wouldnâ€™t say to him, â€˜I want to chew all this over with you.â€™ I mean, itâ€™s all gone. Iâ€™ve written my book, and you know, life is fine.â€

Until Mr. Darrochâ€™s explosive views of Mr. Trump showed up in The Mail on Sunday in July 2019, life was basically fine.

The grandson of a coal miner, who grew up in public housing, Mr. Darroch is not cut from the tailored cloth of many British diplomats. He studied zoology at Durham University, not politics at Oxford. He failed the entrance exam for the diplomatic service, joining through an alternative process known patronizingly as the â€œslow stream.â€

From that unlikely start, Mr. Darroch rose steadily through the ranks, with an early posting in Tokyo and assignments that brought him into the inner circle of power at 10 Downing Street. He served as national security adviser to Prime Minister David Cameron, which gave him an inside track to Washington. But a stint as Britainâ€™s top diplomatic representative to the European Union earned him the reputation in Britainâ€™s euroskeptic press of being a Europhile, a phrase that was thrown back at him when the cables were published.

Mr. Darroch said his humble background was never an impediment in the diplomatic service and may even have helped him. â€œI never had the remotest sense of any kind of entitlement to being where I was, and I worked extremely hard,â€ he said. â€œAlmost like â€˜I canâ€™t let them ever find out how much Iâ€™m faking it.â€™â€

Before going to Washington in January 2016, Mr. Darroch and his wife, Vanessa, set off on a three-month road trip of the United States. A fan of films like â€œEasy Riderâ€ and â€œFive Easy Pieces,â€ he hoped for a glimpse of Americaâ€™s restless heart. Instead, he got an early taste of the appeal of Mr. Trump, an insurgent presidential candidate whose name kept coming up on their stops in Nashville and New Orleans, Las Vegas and Longboat Key, Fla.

By February, Mr. Darroch told his colleagues in London he believed Mr. Trump would win the Republican nomination. He also wrote that Hillary Clinton was a flawed Democratic standard-bearer, though he did not dispute the conventional wisdom that she would ultimately prevail.

â€œIf I had listened more to those people in the Deep South, and in the Southwest, and down in Florida, I might have anticipated better what actually happened on Election Day,â€ Mr. Darroch said. â€œLike everyone, I was dazzled by the opinion polls.â€ He wonders whether the polls that show Joseph R. Biden Jr. with a lead over the president are similarly misleading.

Mr. Darrochâ€™s early appreciation of Mr. Trump was not reciprocated. On the day after the election, he struggled to get a slot for Mrs. May to give the president-elect a congratulatory call. On learning that Mr. Trump had spoken to the leaders of Egypt, Turkey and Australia, Mr. Darroch called Mr. Trumpâ€™s secretary in Trump Tower in desperation and pleaded for her to put his boss through.

Britain had resolved to be solicitous toward the new president, and it fell to Mr. Darroch to lead the charm offensive. He invited White House aides like Jared Kushner and Kellyanne Conway to parties at his baronial residence. But Mr. Trump himself had a knack for kicking sand in British faces. After Mrs. May held a lavish dinner for him at Blenheim Palace, Rupert Murdochâ€™s tabloid, the Sun, published an interview in which he complained she had ignored his advice on Brexit.

It was in this febrile atmosphere that Mr. Darroch privately shared his views with a half-dozen senior officials in London.

â€œWe really donâ€™t think this administration is going to become substantially more normal; less dysfunctional, less unpredictable, less faction-riven, less diplomatically clumsy and inept,â€ he wrote in one memo. In another, he observed, â€œFor a man who has risen to the highest office on the planet, President Trump radiates insecurity.â€

Mr. Darroch said he still did not know who leaked the cables, or for what purpose, and it is the one part of the story that leaves him fuming. But he noted a difference between how his words have registered in Britain, where despite the furies of Brexit, public discourse is still generally civil, and the United States, where reports of Mr. Trumpâ€™s profanity-laced insults barely raise eyebrows anymore.

â€œPeople are still saying to me, â€˜What you said was so awful. How could you say that about a president?â€™â€ he said.

For all that, the rewards of speaking plainly about an unpopular foreign leader have been substantial. Mr. Darroch is one of the very few ambassadors to the United States to be awarded a seat in the House of Lords.

Does he have Mr. Trump to thank for this?

â€œYou have to ask Theresa May because she gave it to me,â€ Mr. Darroch said. â€œBut, you know, itâ€™s a reasonable hypothesis.â€