Home World USA For Some Scottish Seafood Exporters, Brexit Could Be a Death Knell 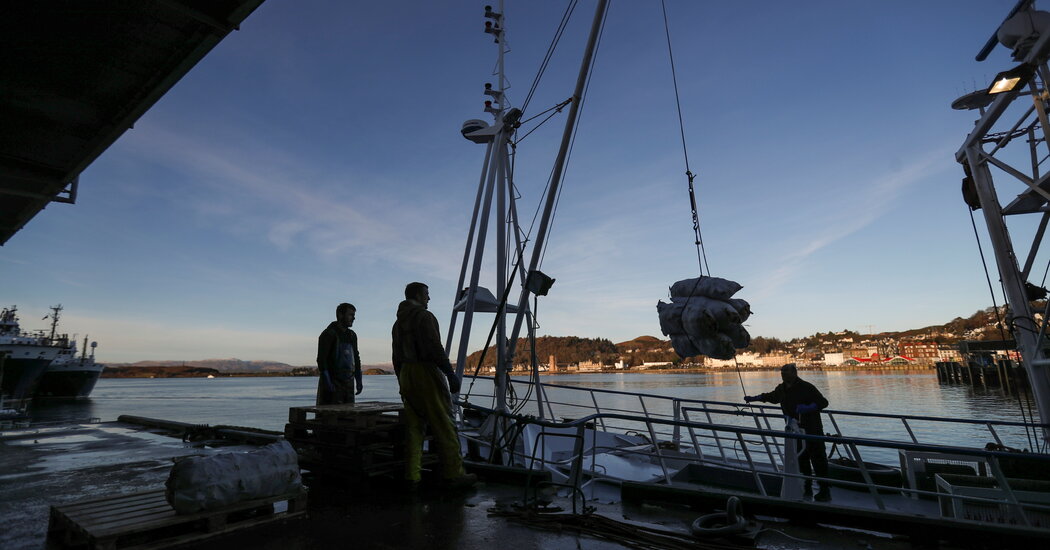 LONDON — Loaded with tons of live crab, lobster and prawns, the trucks headed south from the Scottish town of Oban needed to reach their destination in Spain within 72 hours to be sure the cargo would survive the trip.

But with Britain operating new post-Brexit trading rules, a journey that used to be routine is now a high-stakes gamble for the exporter Paul Knight, managing director of PDK Shellfish.

“It is like roulette,” said Mr. Knight, as he waved off two giant trucks, adding that though he spent tens of thousands of pounds on Brexit preparations he remained terrified that holdups in French ports could cause a large part of his shipment to perish.

“We are as Brexit-ready as we can be and we are still staring failure in the face,” he said, adding that the strain of navigating the new, trading arrangements had pushed him close to the breaking point. “I am exhausted, the pressure is so intense — it is like is like being on a knife edge,” Mr. Knight added.

Since Britain completed the final stage of Brexit on Jan. 1 and left the European Union’s single market and customs union, the world has changed for British exporters to the continent and not in a good way.

Despite a trade deal, struck by Britain and the European Union on Christmas Eve, promises once made by Brexit campaigners that leaving the bloc would free companies from needless bureaucracy now sound like a macabre joke. Consignments that previously moved with minimal fuss now need voluminous paperwork including customs declarations and, for food products, health certificates.

A variety of problems have hit British companies, some of which have suspended sales to continental Europe and even to Northern Ireland, which is part of the United Kingdom but now has a special customs status because of its land border with Ireland, a European Union member state.

But the complications pose a particular threat to Scottish seafood exporters, many of whom rely on the European market because, they say, there is no similar demand at home.

Before dispatching a truck load of live crabs, Colin Anderson and three colleagues devoted an entire day to completing the new paperwork. Even that left him struggling to secure one last document needed to move more than three tons of crab to the Netherlands.

“We thought we were on top of it, but we still don’t have all the documentation,” said Mr. Anderson, managing director of The Crab Company (Scotland), based in Peterhead, as he debated which route to choose for his consignment.

According to Jimmy Buchan, chief executive of the Scottish Seafood Association, a trade organization, the new system is “red tape gone crazy.” There are, he added, “so many certificates required, and if they are not all aligned 100 percent, even if it’s a clerical error, the system rejects it.”

For companies that were already reeling from Covid-19 and a collapse in demand from the hospitality trade, the arrival of new trade rules has come as a sucker punch.

In a video posted on Twitter, Lochfyne Langoustines and Lochfyne Seafarms said that its stock was stuck at ports, that exports to the European mainland had become impossible and that the company could be forced out of business.

“Welcome to the Modern world of Brexit and the mess it brings. Unbelievable that we find ourselves in this position,” it said.

According to Victoria Leigh-Pearson, sales director of John Ross Jr., a smoked salmon producer based in Aberdeen, entire truck loads are being rejected by French customs authorities, apparently without explanation.

“It feels as if our own government has thrown us into the cold Atlantic waters without a life jacket,” she wrote in a letter to the government.

To make matters worse, I.T. failures in France and in Britain were adding to the problems, said Donna Fordyce, chief executive of Seafood Scotland, another trade group.

The changes had unleashed layer upon layer of administrative problems, resulting in delays, border refusals and confusion, she said in a statement.

“These businesses are not transporting toilet rolls or widgets. They are exporting the highest quality perishable seafood which has a finite window to get to market in peak condition,” Ms. Fordyce said.

Customers were rejecting some consignments, and even products that got through sometimes lost value because of the added journey times.

“I wouldn’t be surprised if this would be the death knell of some companies,” said Mr. Buchan. “Some are losing tens of thousands of pounds, and in some cases, it’s running into the hundreds of thousands.”

Instead of minimal bureaucracy, exporting fish to France is now a 25-step process. As well as customs declarations, every consignment of fish and seafood needs health certification after inspection.

At the ports, traffic is still moving freely across the Channel, but that is partly because the holdups are elsewhere.

Central to moving Scottish fish to the markets in France is DFDS, a Danish logistics company that also runs ferry services. It has set up inspections at Larkhall, near Glasgow, where seafood is sent before being driven to ports and then to the continent.

But the integration with government tax and customs systems has not been smooth, forcing the company to implement slower, manual workarounds. In Larkhall there have been delays in getting health certificates signed off and other holdups from exporters failing to send the correct paperwork.

“Our people who are supposed to enter the information have been overwhelmed because of delays.” said Torben Carlsen, the chief executive of DFDS.

Consequently, the company is not currently accepting new orders from smaller companies whose goods have to be grouped together in one truck with lots of different paperwork.

Because each consignment needs the correct certification, a problem with any one of them can stop the entire truckload.

“We have been very stringent,” Mr. Carlsen said. “And so, I believe, has everybody else in making sure that if you don’t have your paperwork in place, you cannot enter the ports. Because if you do that and you cannot move, then you risk much bigger operational problems and supply chain issues.”

As for the extra costs, the Scottish government estimates that new delays at the border including new customs formalities are expected to amount to 7 billion pounds, about $9.5 billion, annually for British business.

Many Scottish exporters feel aggrieved that while the British decided to wave through many European trucks for several months as the kinks are worked out of the system, France implemented the new rules from Day 1.

They want the government to negotiate concessions with the French authorities and, with opinion polls showing majority support for Scottish independence, the seafood industry’s problems are likely to add to resentment of London. A majority of the Scots who voted in the Brexit referendum of 2016 wanted to remain in the European Union but they were outnumbered by English and Welsh voters.

But, while the system could become more efficient in the coming months as teething troubles are smoothed, it is unlikely to become significantly less bureaucratic now that Britain has left the European Union’s customs union and single market.

Inevitably, that means millions more forms being required of exporters and the government, which has urged exporters to expand their horizons and look for non-European markets, has warned them for months to prepare for post-Brexit trading terms.

But for Mr. Knight, from Oban, no amount of preparation can insure against the possibility that his highly perishable product will find itself stuck in a line for hours behind other vehicles awaiting inspection on arrival at a French port.

French officials are trying their best, he says, and two of his trucks have made it successfully. But they traveled during the holiday period when traffic was unusually light, a situation that is bound to change.

With little market for his premium shellfish in Britain, Mr. Knight said that the only way to keep his company going was to keep gambling with the cross-Channel export trade even if the odds were against him.

“At some point we are going to tap the wrong key on the computer or some document is going to have the wrong date on it,” he said. “It’s not a question of if they are going to catch me out, it’s when.”