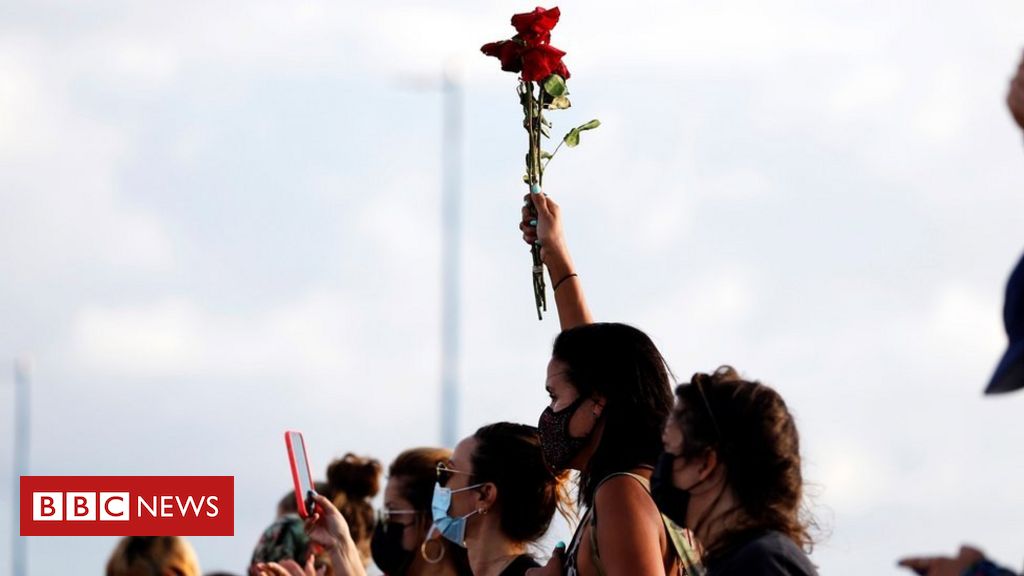 A Puerto Rican boxer who fought in London’s 2012 Olympics has been charged with abducting and killing his pregnant lover.

FÃ©lix Verdejo is accused of attacking Keishla RodrÃ­guez and then throwing her body off a bridge near San Juan, the capital of the US island territory.

He turned himself in to police on Sunday after refusing to co-operate with investigators, police say.

The death has sparked protests against the murder of women in Puerto Rico.

In January, the island declared a state of emergency over violence against women. Puerto Rico has at least one femicide per week, according to local rights groups, with at least 60 such crimes last year.

The 27-year-old married lightweight boxer is facing charges of kidnapping and carjacking resulting in the death and intentional killing of an unborn child.

According to a federal complaint, Mr Verdejo punched his lover in the face before tying her up and throwing her off a bridge.

He also allegedly shot at her in the water with a pistol while standing atop the bridge.

An unnamed witness is also alleged to have helped Mr Verdejo.

The victim’s mother told local media that her daughter was carrying Mr Verdejo’s child and that he had wanted her not to have the baby for the sake of his family and career.

“I told her ‘be careful’ because he had threatened her not to have the baby, that he had his family, that he is a boxer, that he is a public figure,” Keila Ortiz Rivera told El Nuevo DÃ­a newspaper, adding that she last spoke to her daughter on Thursday.

Ms RodrÃ­guez, 27, knew Mr Verdejo since they were teenagers, she said, and had stayed in touch with him over the years.

Her body was found in a lagoon on Saturday and was identified through dental records on Sunday, according to Puerto Rico’s Institute of Forensic Science.

According to Top Rank, a boxing promotion company that has worked with Mr Verdejo since 2012, his boxing record is 27-2, with 17 knockouts.

The company, which removed Mr Verdejo’s page over the weekend, released a statement saying their “thoughts and prayers are with Keishla Marlen Rodriguez Ortiz’s family and friends, and with all those in mourning”.

“We are deeply disturbed by the news reports, and we will continue to monitor developments in the case as it progresses.”

He is due to make a first court appearance on Monday.

On Sunday, hundreds of protesters gathered on a bridge nearby to where Ms RodrÃ­guez’s body was found to protest against the killing of women.

The victim had filed a gender violence case against her partner in March, but a judge dismissed the case, according to local media. Her partner has since been charged with murder.

After years of pressure from activists, Puerto Rico’s Governor Pedro Pierluisi declared the state of emergency over rising violence against women at the start of this year.

The order directs more resources to address the violence, including a mobile app to request emergency help and an educational campaign focused on gender based violence.