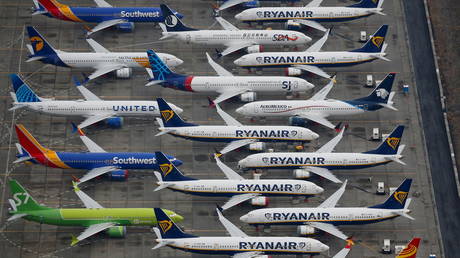 The US Federal Aviation Administration (FAA) on Wednesday cleared Boeing’s 737 Max to fly again after a nearly two-year ban. Boeing’s top-selling plane has been barred from flying after two crashes that killed 346 people.

“The design and certification of this aircraft included an unprecedented level of collaborative and independent reviews by aviation authorities around the world,” the FAA said in a statement.

“Those regulators have indicated that Boeing’s design changes, together with the changes to crew procedures and training enhancements, will give them the confidence to validate the aircraft as safe to fly in their respective countries and regions,” the US aviation agency added.

FAA chief Stephen Dickson said in a video message: “The path that led us to this point was long and grueling, but we said from the start that we would take the time necessary to get this right. I am 100 percent comfortable with my family flying on it.”

American Airlines is set to be the first US airline to return the aircraft to commercial service at the end of December. Executives from United Airlines and Southwest Airlines said they expect the planes to return to their schedules at some point next year.

Regulators grounded the troubled Boeing aircraft worldwide in March 2019, after two nearly new 737 Max planes crashed within five months of one another. The crashes, which occurred in Indonesia and Ethiopia, killed all 346 people on board. They have prompted a lengthy safety review that was met with numerous delays, driving up losses and costs for Boeing.

In both crashes, new flight control software caused the aircraft to unexpectedly nosedive shortly after takeoff.

The accidents prompted widespread concerns about both technical flaws and quality control at Boeing, as well as whether pilots had been given appropriate training to fly the 737 Max. As it turned out, the pilots had not been informed about the new system, and mentions of it had been removed from pilot manuals when the planes were delivered to airlines.

US lawmakers investigating the company last year accused it of concealing information about the plane from regulators during the approval process. A House of Representatives investigation in September found that regulatory, design, and management problems as the jets were being developed had led to the “preventable death” of everyone on board.

Boeing has since updated its flight manuals and revised several features of the model, including the flight control software and associated hardware in the cabin.

Boeing’s shares jumped almost seven percent – the highest since early June – in pre-market trading, on the news of an end having been brought to the jets’ grounding.