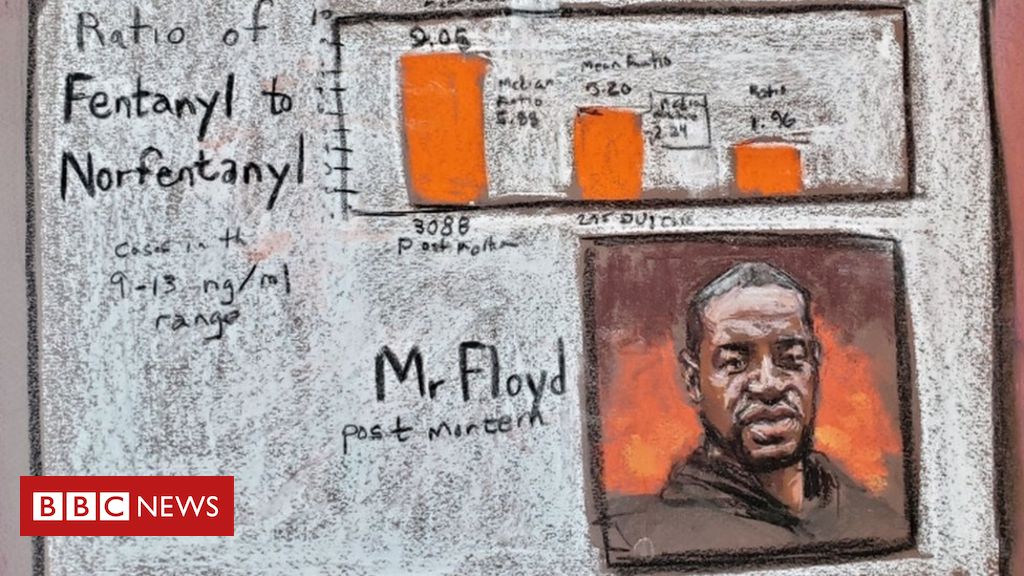 George Floyd died from a lack of oxygen during his arrest, a doctor at the trial of ex-police officer Derek Chauvin in Minneapolis has said.

Contradicting the defence, Dr Martin Tobin said fentanyl did not cause Mr Floyd’s death. He said even a “healthy person…would have died”.

Mr Chauvin, 45, was filmed kneeling on Mr Floyd’s neck for more than nine minutes during his arrest last May.

The ex-officer is on trial for murder and has denied the charges against him.

The footage of Mr Chauvin, who is white, with his knee on African-American Mr Floyd’s neck sparked global protests against racism.

The trial is in its second week and is expected to last for at least one month. The defence is due to begin arguing its case in court next week.

What did the experts say about fentanyl?

A toxicology report released last June said that Mr Floyd had the painkiller fentanyl and the drug methamphetamine in his system.

Since then, the defence has argued that the fentanyl caused Mr Floyd’s loss of oxygen.

However Dr Tobin, an intensive care doctor, said that Mr Floyd’s breathing did not slow down enough for the painkiller to have been a factor in his total loss of oxygen.

Forensic toxicologist Daniel Isenschmid, whose laboratory tested Mr Floyd’s blood and urine samples following his death, said there was evidence that some of the fentanyl had metabolised, meaning that an overdose was less likely.

Dr Smock said Mr Floyd displayed “air hunger”, a term for when the body becomes desperate for oxygen. While a fentanyl overdose can slow down breathing, he said people who are overdosing are not aware that they are lacking oxygen and often appear sleepy. In contrast, he said Mr Floyd appeared to be alert.

Dr Smock also told the court that while viewing the footage, he heard Mr Floyd complain about being unable to breathe before he was restrained on the ground.

What else was the court told?

Asked about the positioning of the handcuffs behind Mr Floyd’s back, coupled with the downward pressure of Mr Chauvin’s weight against him, Dr Tobin – an expert in pulmonary medicine – said that Mr Floyd’s ability to expand his chest to breathe was severely impaired.

It was, Dr Tobin said, like the left side of his chest was “in a vice”.

Dr Tobin said the positioning of the handcuffs was also significant.

“[Mr Floyd] has used up his resources and is literally trying to breathe with his fingers and knuckles against the street to try to crank up his chest, to try to get air into his right lung,” he added.

‘Healthy person would have died too’

Dr Tobin said that Mr Floyd had already shown signs of brain injury about four minutes before Mr Chauvin took his knee off his neck, and that a healthy person who was put through this “would have died” too.

About three minutes before Mr Chauvin removed his knee, Dr Tobin said, there was “not an ounce of oxygen left in his body”.

During his cross-examination, defence attorney Eric Nelson suggested that Dr Tobin’s assessment was “conditioned upon [Mr Floyd] being a healthy individual”.

“We understand that Mr Floyd had some heart disease,” Mr Nelson said. “That’s going to affect blood flow in a person?”

Dr Tobin said that if Mr Floyd had been suffering from a coronary condition at the time he would have been “complaining of chest pain and demonstrating a very rapid respiratory rate,” adding: “We don’t see either.”

What has happened in the trial so far?

The court has heard from witnesses, medical experts and police officers. The moments leading to Mr Floyd’s encounter with police, as well as the footage that sparked nationwide protests, have been closely scrutinised.

The early stages of the trial saw often tearful testimony from onlookers. The teenager whose video of the arrest went viral said “it’s been nights I stay up apologising and apologising to George Floyd for not doing more”.

This week the Minneapolis police chief Medaria Arradondo said Mr Chauvin had violated the agency’s policy on using force. An expert witness also said that the use of force was “excessive”.

The defence has sought to show Mr Chauvin acted lawfully in a volatile situation. His lawyer said the evidence “is clearly more than about nine minutes and 29 seconds,” referring to the videos of Mr Floyd’s death.

The jury’s verdict must be unanimous and US police officers are rarely convicted or charged at all for deaths that occur in custody.