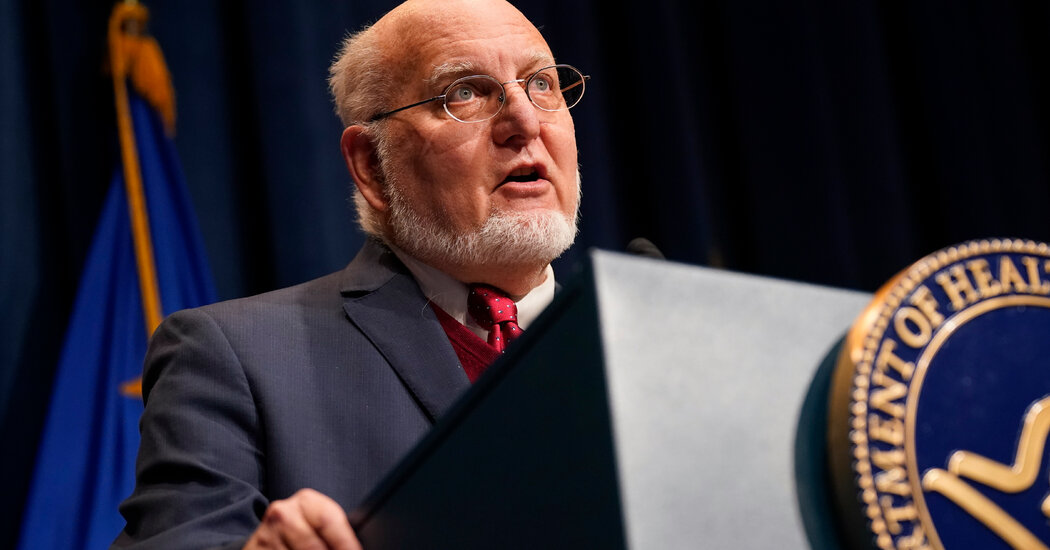 Science|The C.D.C.’s ex-director offers no evidence in favoring speculation that the coronavirus originated in a lab.

The former director of the Centers for Disease Control and Prevention said in a CNN clip on Friday that he favored a theory, decried by many scientists and rejected as “extremely unlikely” by at least one World Health Organization international expert, that the coronavirus escaped from a lab in Wuhan. The former official, Dr. Robert Redfield, offered no evidence and emphasized that it was his opinion.

“I am of the point of view that I still think the most likely etiology of this pathogen in Wuhan was from a laboratory, escaped. The other people don’t believe that. That’s fine. Science will eventually figure it out,” Dr. Redfield told Dr. Sanjay Gupta in the video clip, referring to the origin of the virus. A formal report from the W.H.O. team and the Chinese scientists it worked with, on the origins of the pandemic and on the coronavirus in humans, is expected next week.

During the Trump administration, then-Secretary of State Mike Pompeo, and to a lesser extent the president himself, pushed the theory that the coronavirus had escaped from a lab.

Mr. Pompeo pressed the spy agencies to investigate the lab theory and Richard Grenell, then the acting director of national intelligence, convened a review of what was known about the origin of the novel coronavirus.

Some in the Trump administration shared Mr. Pompeo’s suspicions that an accident had occurred, and coronavirus samples being researched had inadvertently infected workers who then spread it in Wuhan. These officials pointed to some scientific reports that they said bolstered their feelings.

The claims that the virus was created or modified intentionally in a lab were dismissed by scientists and U.S. intelligence officials. The Office of the Director of National Intelligence in the Trump administration concurred “with the wide scientific consensus that the Covid-19 virus was not man-made or genetically modified.”

Although that statement was diplomatically worded, the message from the intelligence agencies was clear that, despite pressure from the Trump administration, they had no evidence that the coronavirus had escaped from the lab. And many intelligence officials remained far more skeptical than Mr. Pompeo, telling colleagues there was simply not enough information to say where the coronavirus came from, and certainly not enough to challenge the scientific consensus that was skeptical of the lab theory.

The C.I.A. and other intelligence agencies have been skeptical that China was sharing all that it knew about the virus, although that was at least in part because of local officials withholding critical information from Beijing at key moments at the beginning of the outbreak.

A group of scientists who remain convinced of the possibility of a lab leak wrote an open letter in early March when the W.H.O. team report was first anticipated demanding a thorough investigation of Chinese labs. Virologists who have studied the evolution of coronaviruses and the way they have jumped to humans in the past causing SARS and MERS continue to argue that the evidence for a natural origin apart from a lab leak is overwhelming.

The Chinese government, prominent Chinese scientists and many virologists, who study the evolution of viruses and the appearance of infectious diseases, have said the lab leak theory was very unlikely, citing genetic evidence and the many opportunities for natural infection in human interactions with animals like bats, where the virus is believed to have originated.

When Dr. Anthony S. Fauci, the United States’ top infectious disease expert, was asked at a White House news conference on the pandemic on Friday about Dr. Redfield’s comments, he noted that the remarks were only an opinion. Dr. Fauci said that there are different ways viruses could become adapted to humans.

“You know one of them is in the lab and one of them, which is the more likely, which most public health officials agree with, is that it likely was below the radar screen, spreading in the community in China for several weeks if not a month or more, which allowed it, when it first got recognized clinically to be pretty well adapted,” Dr. Fauci said.

At the same news conference on Friday, Dr. Rochelle Walensky, the director of the C.D.C., said she was looking forward to reviewing the upcoming joint report from the W.H.O. experts and Chinese scientists.

“I have theories, but I’m not a scientist,” he said. “I’m going to wait until the scientific community makes that judgment.”