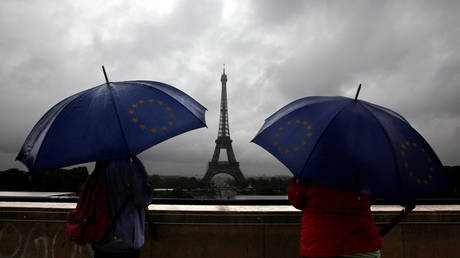 The euro area is on a path for another economic contraction, as key indicators for the eurozone economy plunged to a six-month low in November, amid renewed government efforts to contain the spread of Covid-19.

According to the latest survey by the research firm IHS Markit, both the flash eurozone composite output and services activity purchasing managers’ indices (PMIs) hit their lowest levels since May. The former sank to 45.1 in November from 50.0 seen in October, while the latter plunged to 41.3 from 46.9.

Any reading on the index below 50 signals a contraction, while a reading above this level marks growth.

Also on rt.com
Eurozone economy on track for double-dip recession

The research firm noted that apart from the steep decline seen in the first two quarters of this year, when the region saw the strictest lockdowns due the pandemic, the average PMI reading of 47.6 in the fourth quarter “so far is the lowest” since the debt crisis of 2012.

“The eurozone economy has plunged back into a severe decline in November amid renewed efforts to quash the rising tide of Covid-19 infections,” said Chris Williamson, Chief Business Economist at IHS Markit. “The data add to the likelihood that the euro area will see GDP contract again in the fourth quarter.”

Also on rt.com
Over half of Europe’s smaller firms may be bankrupt within a year – McKinsey poll

Europe’s largest economy, Germany, has helped the region avoid an even bigger downturn. Unlike many of its peers, its flash composite PMI did not fall into contraction territory, but dropped from 55.0 to 52.0, to register the weakest expansion since the recovery began in July.

Further decline may become another setback for the European economy and stall its recovery. IHS Markit expects a 7.4 percent contraction in the eurozone economy this year and only a 3.7 percent expansion in 2021.