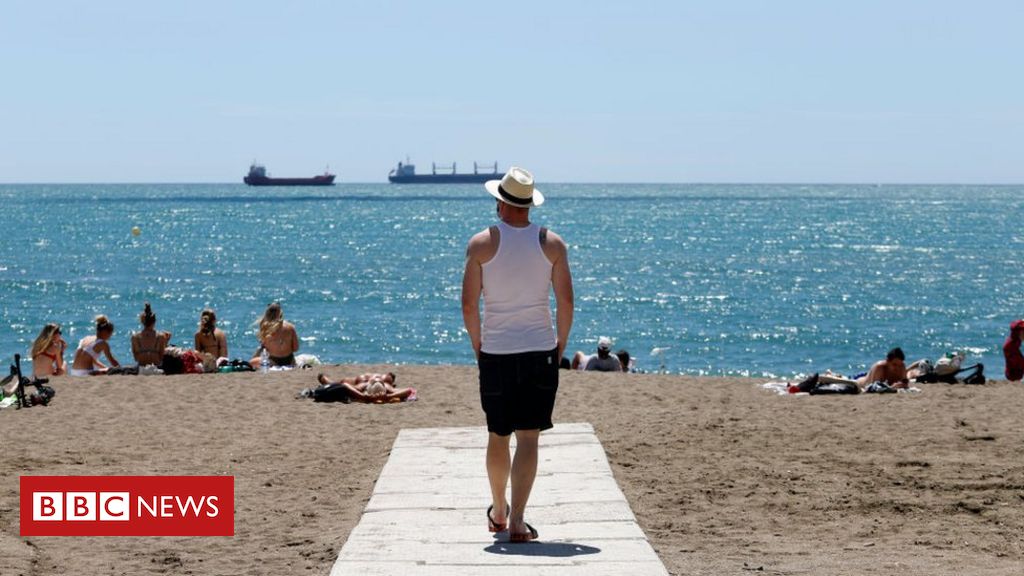 The EU Commission has recommended easing restrictions on non-essential travel from overseas.

Under the plans, anyone who has received the last dose of an EU-approved vaccine at least two weeks beforehand will be permitted to travel.

The EU currently only allows non-essential travel from seven countries.

But the proposals will also contain an “emergency brake” allowing member states to limit travel quickly in response to new variants or a deteriorating health situation in non-EU countries. This would be reviewed every two weeks.

Discussions on the plans will begin on Tuesday.

The EU has already announced plans for a digital certificate, which would cover anyone who is either vaccinated against Covid-19, has a negative test or has recently recovered.

What do the proposals say?

Member states will be able to accept tourists from outside the EU if they have received an approved jab, the European Commission said on Monday, although this could be extended for vaccines that have completed the World Health Organization’s (WHO) emergency use listing process.

In addition, children who have not been able to receive a vaccine should be able to travel with their parents as long as they present a negative test, although further testing may be required on arrival.

Until the EU-wide pass, known as the digital green certificate, is launched, countries “should be able to accept certificates from non-EU countries based on national law”, the European Commission added. This decision would include “ability to verify the authenticity, validity and integrity of the certificate and whether it contains all relevant data”.

The plans will increase also the threshold number of cases in countries from which all travel is allowed – subject to quarantine or testing – from 25 infections per 100,000 people to 100. This, the proposals note, is still far below the EU average of more than 420 per 100,000.

The measures will not affect current rules on essential travel or EU citizens and long-term residents and their families.

The recommendation will cover all EU member states, apart from Ireland, as well as Iceland, Liechtenstein, Norway and Switzerland.

Which vaccines will be accepted?

The same jabs have been authorised for emergency use by the WHO, with similar approvals for China’s Sinopharm and Sinovac expected in the coming days and weeks.

All three vaccines used in the UK – Pfizer-BioNTech, Oxford-AstraZeneca and Moderna – would therefore be covered by the new EU plans.

How will certificates be managed?

Last week, European lawmakers approved plans for an EU-wide digital pass to restart travel in time for the summer holidays.

Key to the certificate is a QR code – a machine-readable graphic code made up of black and white squares – that contains personal data and the EU’s Commission says it will be safe and secure. It is working with the WHO to ensure the certificate is recognised beyond Europe.

The 27 member states also want to include non-EU countries such as Norway, Iceland and Switzerland, with officials saying earlier this week that vaccinated travellers from the US may also be able to visit Europe this summer.

However, a spokesman for the European Commission said last week that there had been “no contacts” with the UK over the issue. The UK government, which has indicated that foreign travel may resume from 17 May, is working on its own digital system for international travel that would prove travellers’ vaccination status.

But practical concerns over the EU certificate remain, including questions over how long immunity lasts after an infection and whether further jabs will be needed amid the rapid spread of more contagious Covid variants.

Other issues include what data would be used to prove an individual was not infected with coronavirus, privacy concerns and issues recognising information from different countries’ health authorities.

What have other countries done?

A number of countries have already begun unveiling their own passes as they reopen.

In Denmark, the Coronapas app is being used to allow customers who have been vaccinated or recovered from an infection to enter bars, restaurants and museums.

A similar scheme in Israel, which has one of the highest levels of vaccinations in the world, permits users to access hotels, gyms and theatres. The “Green pass” has also created travel opportunities for Israeli citizens, following deals with Greece and Cyprus.

The International Air Transport Association (IATA), meanwhile, has launched its own app, the IATA Travel Pass, which is being trialled by a number of airlines, including Emirates, Etihad and Qantas.