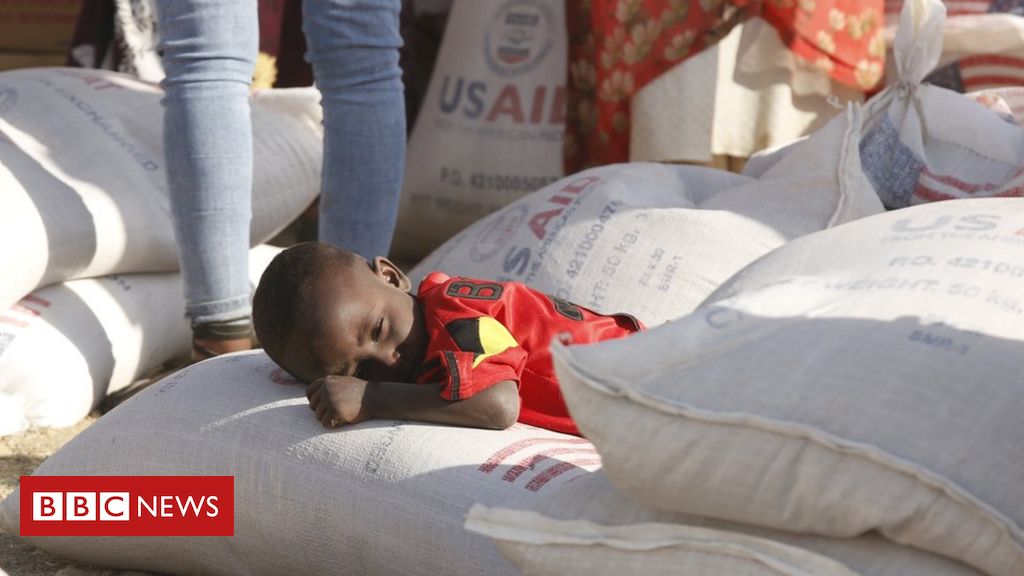 UN humanitarian chief Mark Lowcock has said there is famine in northern Ethiopia after the release of a UN-backed analysis of the situation.

“There is famine now,” he said, adding: “This is going to get a lot worse.”

The study found that 350,000 people were living in “severe crisis” in the war-torn Tigray region.

Tigray has been devastated by fighting between government forces and rebels, with 1.7 million people displaced since fighting began in November 2020.

The UN’s World Food Programme (WFP), Food and Agriculture Organization and children’s agency Unicef have all called for urgent action to address the crisis.

The analysis – or Integrated Phase Classification (IPC) as it is known – was not endorsed by Ethiopia’s government, which has denied that there is a famine in the country.

It insists that humanitarian access is being expanded as it restores order across the region.

‘Death is knocking on our door’

People in Qafta Humera, an isolated district in the west of Tigray, told the BBC this week they were on the verge of starvation.

“We don’t have anything to eat,” one man said by phone, explaining their crops and livestock had been looted during seven months of war.

They were being prevented from seeking aid by a militia fighting with government forces, he added.

“We were eating small remains of crops that we managed to hide, but now we don’t have anything,” said a farmer in his 40s.

“Nobody has given us any aid. Almost everyone is on the verge of death – our eyes are affected by the hunger, the situation is perilous. Death is knocking on our door. You can see the hunger on the face of each of us.”

Residents said they had seen vehicles carrying aid pass by, but no-one had bothered to inquire about their predicament.

In 1984, Tigray and the next-door province of Wollo were the epicentre of a famine caused by a combination of drought and war that led to between 600,000 and one million deaths.

The Integrated Phase Classification is a measure of the severity of food shortages, drawn up by multiple organisations which include UN agencies and non-governmental aid organisations.

“An IPC analysis update conducted in Tigray and the neighbouring zones of Amhara and Afar concludes that over 350,000 people are in Catastrophe (IPC Phase 5) between May and June 2021,” the report says.

“This severe crisis results from the cascading effects of conflict, including population displacements, movement restrictions, limited humanitarian access, loss of harvest and livelihood assets, and dysfunctional or non-existent markets,” the analysis adds.

It says that as of May, 5.5 million people were facing high levels of acute food insecurity in the region and the situation was likely to worsen through to September.

But the report stops short of officially declaring a famine, which has a very specific definition.

The power of the word ‘famine’

The IPC announcement falls short of declaring a famine in Tigray. That is because the “f-word” is such a powerful, compelling word that governments and international organisations have agreed it should only be used when certain strict criteria are met.

For now, the IPC has settled on the use of the word “catastrophe” instead – with a warning that large parts of Tigray are at risk of famine in the coming months.

Put simply, a “Phase 5 catastrophe” can refer to small groups of people, spread over large areas, whereas the word “famine” is only used when a big and distinct population group is experiencing conditions of starvation and death. And right now, in Tigray – in part because of insecurity and problems accessing those in most need – there is not yet the data to support a definition of famine.

But many experts find this – often highly politicised – debate over definitions both petty and counter-productive, and individuals, like the UN’s humanitarian chief, Mark Lowcock, have chosen to ignore the rules and insist that “there is famine now in Tigray”.

Why is there fighting in Tigray?

The party had had a massive fallout with Prime Minister Abiy Ahmed over political changes to the country’s ethnically based federal system – though the TPLF’s capture of federal military bases in Tigray was the catalyst for the invasion.

Mr Abiy, a Nobel Peace Prize winner, declared that the conflict was over at the end of November, but fighting has continued.

Thousands of people have been killed. Tens of thousands have sought refuge in neighbouring Sudan.

All sides have been accused of numerous human rights abuses.

When is a famine declared?

Food shortages can lead to large numbers of people lacking nutrition, but only rarely do they amount to famine, according to UN humanitarian criteria.

Long periods of drought and other problems reducing the supply of food do not necessarily result in a famine.

A famine is declared only when certain measures of mortality, malnutrition and hunger are met. They are:

The declaration of a famine carries no binding obligations on the UN or member states, but serves to focus global attention on the problem.