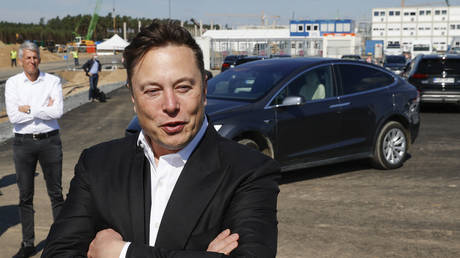 With a net worth of over $288 billion, Elon Musk’s fortune is now bigger than the market value of US energy major ExxonMobil. This comes as Musk’s electric car company Tesla joins the elite trillion-dollar club of companies.

According to the Bloomberg Billionaires Index, the wealth of the world’s richest person, Musk, jumped to $288.6 billion on the news that Tesla has landed its biggest-ever order from rental car chain Hertz.

The automaker’s shares have been rising in recent weeks, even before Hertz’s decision to order 100,000 Tesla vehicles by the end of 2022. The company’s stock price is up by more than 40% this year, almost double the gain of the S&P 500 Index. Tesla is now the first carmaker to join the elite group of companies with a trillion-dollar market cap that includes Apple, Amazon, Microsoft, and Alphabet.

The $36.2-billion jump in Musk’s personal fortune is the biggest one-day gain in the history of the Bloomberg Billionaires Index. The previous record was held by Chinese tycoon Zhong Shanshan’s $32-billion surge in net worth last year, on the day his bottled water company went public.

According to a regulatory filing on Monday, a surge in Tesla stock is not the only source of wealth gain for Musk. The filing shows that the seventh tranche of Musk’s massive 2018 stock option package vested in the third quarter added about $8 billion to his net worth.