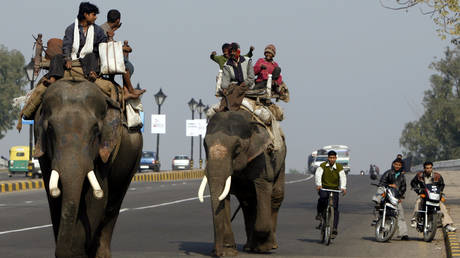 India’s economy picked up pace in June after a sharp decline in May due to the pandemic-induced lockdowns. Mobility levels rose by 24% nationwide after plunging to a 12-month low in May.

Two major state economies, Uttar Pradesh and Gujarat, were the fastest to recover after being hit with a new wave of the pandemic in April. Both saw a drop in Covid-19 cases since then and somewhat relaxed lockdown restrictions, which prompted a quick recovery in mobility and economic activity.

Also on rt.com
Indian hospital closed amid FAKE COVID VACCINE scam, as 2,500+ are feared to have been given saline & antibiotics instead

The improved vaccination rate also added momentum to the effort, Mint reports. However, vaccination rates differ from state to state, with heavily-populated Bihar and Uttar Pradesh falling far behind other regions.

Nationwide car sales more than doubled after dropping last month, with some 1.2 million registrations in June compared to only half a million in May. These figures were still 15% lower than the same period in 2019, however. Small- and medium-sized states had a better showing than large states on this indicator.

With lockdown restrictions eased across the country, mobility levels that had dropped to about half of pre-pandemic levels in mid-May soared to 81% of normal levels by the end of June. Uttar Pradesh and Madhya Pradesh showed the highest public mobility levels – 94% and 88% respectively. Furthermore, according to Google data, a number of districts in northern and central India have been showing greater public mobility than before the coronavirus outbreak. Those are Bihar, Himachal Pradesh, Chhattisgarh and Uttarakhand.

Also on rt.com
India’s oil demand expected to return to normal by end of year

Overall, unlike last year, when larger states performed poorly against smaller ones amid the pandemic crisis, this year India’s six largest state economies – Maharashtra, Tamil Nadu, Uttar Pradesh, Gujarat, Karnataka and West Bengal – performed in line with the rest. These states account for more than half of India’s economic output.

Brazil senators back criminal charges against Bolsonaro over Covid handling

Alex Clare: The singer who chose his faith over Adele tour