Home Economy DOLLAR will CRASH in 2021, US should brace for double-dip recession, economist... 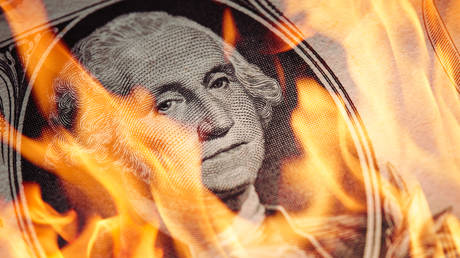 Next year will be brutal for the US currency, according to Yale University senior fellow Stephen Roach. He said that his “seemingly crazed idea” that the dollar will crash shouldn’t seem so crazy anymore.

“We’ve got data that’s confirmed both the saving and current account dynamic in a much more dramatic fashion than even I was looking for,” Roach told CNBC.

According to him, “The current account deficit in the United States, which is the broadest measure of our international imbalance with the rest of the world, suffered a record deterioration in the second quarter.” He added that “The so-called net-national savings rate, which is the sum of savings of individuals, businesses and the government sector, also recorded a record decline in the second quarter going back into negative territory for the first time since the global financial crisis.”

Last June, the economist predicted a collapse of the US dollar could happen in the next year or two, maybe more. Now, he sees it happening by the end of 2021.

Also on rt.com
Fed set FIERCEST WILDFIRE that’s burning out of control through the entire US economy – Peter Schiff

“Lacking in saving and wanting to grow, we run these current account deficits to borrow surplus saving, and that always pushes the currencies lower,” he said. “The dollar is not immune to that time-honored adjustment.”

Roach, the former chairman of Morgan Stanley Asia, also put the probability of a double-dip recession in the US above 50 percent.

“As we head into flu season with the new infection rates moving back up again with mortality unacceptably high, the risk of an aftershock is not something you can dismiss,” he said. “The record of history suggests that this is not a time unlike what the frothy markets are doing to bet that this is different.”