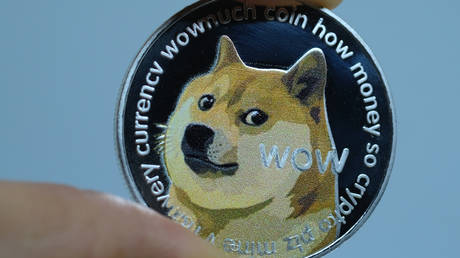 The cryptocurrency inspired by the popular Shiba Inu meme, dogecoin, which was initially set up as a joke, took a dive after a record rally that saw its market capitalization topping $50 billion.

Dogecoin fell more than 20% to trade at around $0.27 on Wednesday, according to data from price tracking website CoinDesk. The slump pushed the coin down to the sixth position among the largest cryptocurrencies by market value, with its market cap currently standing at around $40 billion.

It comes shortly after the market value of the meme-based token surpassed $50 billion. As of Tuesday, its capitalization was more than $53 billion, data from CoinGecko shows, putting it on par with the world’s fourth-biggest car producer, Stellantis, and making it worth more than social media giant Twitter.

Also on rt.com
‘Who let the Doge out?’ Musk’s favorite canine-crypto smashes another record high as celebrities jump on board

Dogecoin’s recent losses seem minor compared to its enormous rally. Over the last seven days, the token surged nearly 250% and more than 400% in one month. Those who poured money into it a year ago enjoyed gains of nearly 16,500%, according to CoinGecko. Year to date, the coin has gained around 7,000%.

The spike in dogecoin recorded earlier this week was fueled by its fans who used the hashtags #DogeDay and #DogeDay420 to post memes, videos, and messages about the coin on social media. Supporters dubbed April 20 ‘Dogeday’, when they hoped to get the coin’s value to $1.

In another positive sign for dogecoin fans, online electronics retailer Newegg announced on Tuesday that it started accepting the cryptocurrency as a method of payment. Mars, the parent company of Snickers and Milky Way, earlier signaled support for the token on social media.

The dogecoin rally has also been driven by support from Tesla CEO Elon Musk, who has repeatedly posted memes about the Shiba Inu-themed token and called it his favorite crypto. Last week, he took to Twitter again, posting a picture by Spanish artist Joan Miro and captioning it “Doge Barking at the Moon.”

Some analysts warn that the dogecoin bubble could easily pop. Veteran trader Eddie Ghabour, managing partner at Key Advisors Group, earlier told Yahoo Finance that he considers the token more suitable for speculation, adding that “when this bubble bursts, it will probably cease to exist.”