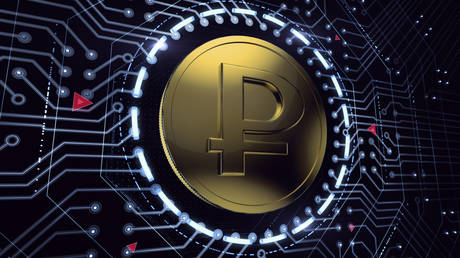 The launch of the digital ruble by the Central Bank of Russia will be one of the key digitization projects this decade, according to the Russian finance ministry.

â€œOne of the key projects in the sector of digitalization in the future before 2030 will be the launch of the digital ruble â€“ the third form of money issued by the Bank of Russia,â€ said the Russian Ministry of Finance.

According to the ministry, the introduction of the digital ruble will contribute to further development of the payment infrastructure, increase competition, and help spread new innovative financial instruments. It also promises to increase the availability and reduce the cost of services for people and businesses.

Also on rt.com
Russia is not ready to recognize cryptocurrencies â€“ Kremlin

The concept of a national digital currency was unveiled by the Russian Central Bank in late 2020. The new form of money is expected to coexist with cash and non-cash rubles. Unlike virtual currencies such as bitcoin, the digital ruble is projected to pose minimal risk, since it will be issued by the state monetary regulator, and will be backed by traditional money.

Last week, the Kremlin said that Russia is not ready to recognize bitcoin or other cryptocurrencies, because equating cryptocurrency with money would harm the countryâ€™s financial system.