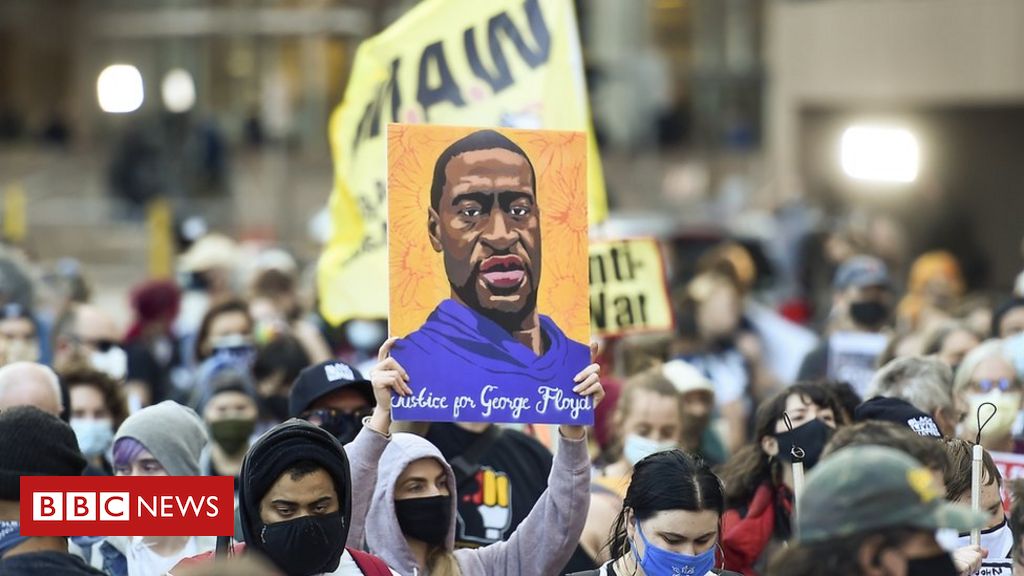 A Minneapolis court has been shown new police bodycam footage of George Floyd pleading with officers during his arrest, saying: “I’m not a bad guy”.

The video shows police officer Derek Chauvin with his knee on Mr Floyd’s neck for more than nine minutes, and Mr Floyd begging not to be harmed.

Mr Chauvin, 45, who has since been fired from the police force, denies charges of murder and manslaughter.

Defence lawyers have indicated they will argue that 46-year-old Mr Floyd died of an overdose and poor health, and the force used was reasonable.

Observers on the third day of the trial said footage shown of Mr Floyd’s actions before and during the arrest may be an attempt by prosecutors to deal with the allegation that drugs played a part in his death.

If convicted of the charges, Mr Chauvin could be jailed for decades in the trial, which is expected to take about one month.

What does the bodycam film show?

The court has been shown footage from the body cameras belonging to officers Thomas Lane, J Alexander Kueng and Tou Thao. Mr Chauvin’s camera fell to the ground as the arrest unfolded and so did not give a visual recording of the event.

In Mr Lane’s footage, Mr Floyd is seen being confronted by police. He begs them: “Please don’t shoot me… I just lost my mom.”

Mr Floyd is handcuffed and continues to plead with Officers Lane and Kueng, saying he is not resisting them and “will do anything you tell me to”.

A scuffle occurs when police try to get Mr Floyd into a vehicle, and he starts crying and resisting while saying he is claustrophobic and has anxiety.

Mr Chauvin and his partner Mr Thao arrive as the arrest goes on.

As the police officers drag him out of the car and restrain him on the ground, Mr Floyd can be heard calling for his mother and telling his family members he loves them.

Bystanders begin to shout at officers to check Mr Floyd’s pulse and stop restraining him.

Mr Chauvin is standing trial separately from the other three police officers because of Covid restrictions on space. The others are charged with aiding and abetting second-degree murder and will come before the courts in August.

What did witnesses say on Wednesday?

Shop employee Christopher Martin, 19, told the court he briefly interacted with Mr Floyd as a customer inside Cup Foods shortly before his arrest.

He said Mr Floyd “appeared to be high” because he struggled to respond to a simple question, but he was lucid enough to able to hold a conversation. He described Mr Floyd as “friendly and approachable”.

In the shop’s surveillance video, Mr Floyd can be seen laughing, talking to people, and walking around.

Mr Martin told the jury he had sold Mr Floyd a packet of cigarettes, and received a counterfeit note as payment. Mr Martin described knowing the bill was fake by its colour and texture, but added that Mr Floyd “didn’t seem to know it was a fake note”.

He said he had considered letting the shop deduct it from his wages instead of confronting Mr Floyd, but then decided to tell his manager. Another employee went on to call the police.

Mr Martin, who witnessed the arrest, said he felt “disbelief and guilt” because “if I’d have just not taken the bill, this could have been avoided”.

Charles McMillian, 61, was another witness who took the stand on Wednesday.

Based on CCTV footage, Mr McMillian appears to have been the first bystander on the scene of Mr Floyd’s arrest. He told the court he engaged in conversation with Mr Floyd, urging him to get into the police car.

Mr McMillian said he remembers feeling “helpless” seeing the incident unfold. He can be heard on video telling Mr Chauvin: “Your knee on his neck, that’s wrong man.”

As the court was shown footage of the arrest, Mr McMillian began to sob, and the judge called for a brief recess.

The court was also shown separate footage of Mr McMillian from Mr Chauvin’s own body camera.

In the footage, Mr McMillian confronted Mr Chauvin about the arrest after Mr Floyd was taken away in the ambulance.

“We had to control this guy because he’s a sizeable guy,” Mr Chauvin told Mr McMillian, as he got back in his squad car. “It looks like he’s probably on something.”

What else has happened in the trial so far?

In opening statements on Monday, Prosecutor Jerry Blackwell told the jury that Mr Chauvin had “betrayed his badge” by kneeling on Mr Floyd’s neck, and using “excessive and unreasonable force” to detain him.

Meanwhile, Mr Chauvin’s lawyer Eric Nelson said the case was about the evidence, not about a “political or social cause”. He said Mr Floyd had ingested drugs at the time of his arrest “in an effort to conceal them from the police”, and suggested this had contributed to his death.

Four young witnesses took to the stand on Tuesday. Darnella – the teenager whose film of Mr Floyd’s death sparked global protests – said she “stays up apologising” to him for “not doing more”.

She told the court she had started filming on her phone because she “saw a man terrified, begging for his life”.

One witness, Donald Williams II, who is trained in mixed martial arts, was questioned for more than an hour by the prosecution and defence on Monday and again on Tuesday. He told the court Mr Chauvin had used a dangerous technique called a “blood choke” and was moving his knee back and forth to increase the pressure on Mr Floyd’s back and neck.

He rejected defence suggestions that he and other bystanders’ interactions with police had been threatening to the officers there.

Genevieve Hansen, a Minneapolis firefighter and emergency medical technician who was off duty at the time of the arrest, said she was “desperate to help” Mr Floyd but officers would not let her.

Mr Chauvin has been silent but remained engaged during the proceedings, taking almost constant notes on a yellow legal pad while listening to the evidence.

Why is this case so important?

The video footage of Derek Chauvin kneeling on George Floyd’s neck last May was watched around the world.

To many, Mr Floyd’s death in police custody became a symbol of police brutality – particularly against people belonging to ethnic minorities – and it sparked mass demonstrations for racial justice.

But despite the global outcry this is not an open and shut case. In the US, police are rarely convicted for deaths that occur while they are on duty, if they are charged at all.

The verdict in this case will be widely seen as an indication of how the US legal system treats deaths that occur while in police custody.